When Dutch colonists became the first Europeans to discover Gunung (Mount) Padang in the early 20th century, they must have been awestruck by the sheer scale of their ancient stone surroundings.

Here, scattered across a vast hilltop in the West Java province of Indonesia, lay the remnants of a massive complex of rocky structures and monuments – an archaeological wonder since described as the largest megalithic site in all of Southeastern Asia.

But those early settlers couldn’t have guessed the greatest wonder of all might lay hidden, buried deep in the ground below their feet.

In controversial new research presented at the AGU 2018 Fall Meeting in Washington, DC last week, a team of Indonesian scientists presented data to make their case that Gunung Padang is in fact the site of the world’s oldest known pyramid-like structure.

Their research, which has been conducted over the course of several years, suggests that Gunung Padang is not the hill we think it is – but is actually a layered series of ancient structures with foundations dating back some 10,000 years (or even older).

“Our studies proves that the structure does not cover just the top but also wrap around the slopes covering about 15 hectares area at least,” the authors write in the abstract for their new poster.

“The structures are not only superficial but rooted into greater depth.”

Using a combination of surveying methods – including ground penetration radar (GPR), seismic tomography, and archaeological excavations – the team says Gunung Padang is not just an artificial structure, but a series of several layers built over consecutive prehistoric periods.

The topmost, megalithic layer made up of rock columns, walls, paths, and spaces, sits above a second layer some 1-3 metres below the surface. 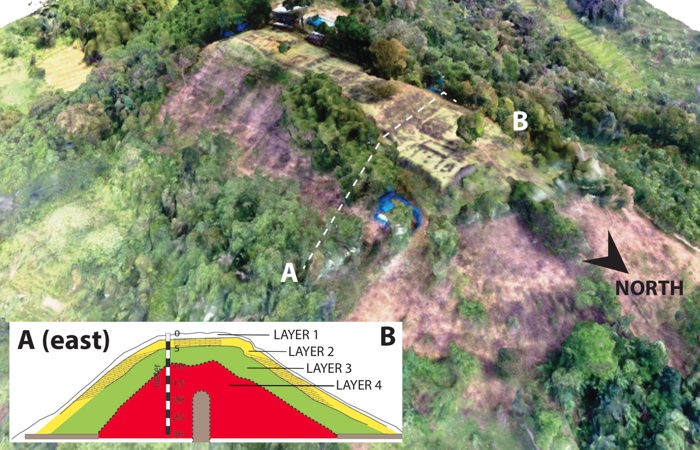 The researchers suggest this second layer has previously been misinterpreted as natural rock formation, but is actually another arrangement of columnar rocks organised in a matrix structure.

Below this, a third layer of arranged rocks – containing large underground cavities or chambers – extends as far as 15 metres deep, and this sits upon the lowest (fourth) layer, made of ‘lava tongue’ basalt rock, somehow modified or carved by human hands.

According to the researchers, preliminary radiocarbon dating suggests the first layer could be up to approximately 3,500 old years old, the second layer somewhere around 8,000 years old, and the third layer in the vicinity of 9,500 to 28,000 years old.

As for the purpose of these ancient, vast structures, the researchers – led by geophysicist Danny Hilman Natawidjaja from the Indonesian Institute of Sciences – suggest the ancient pyramid could have had a religious basis.

For now, that’s speculation, but if the researchers’ other claims about the structures turn out to be right, it’s a major finding that could challenge notions of what prehistoric societies were capable of.

‘It’s huge,” Natawidjaja told The Sydney Morning Herald in 2013. ”People think the prehistoric age was primitive, but this monument proves that wrong.” 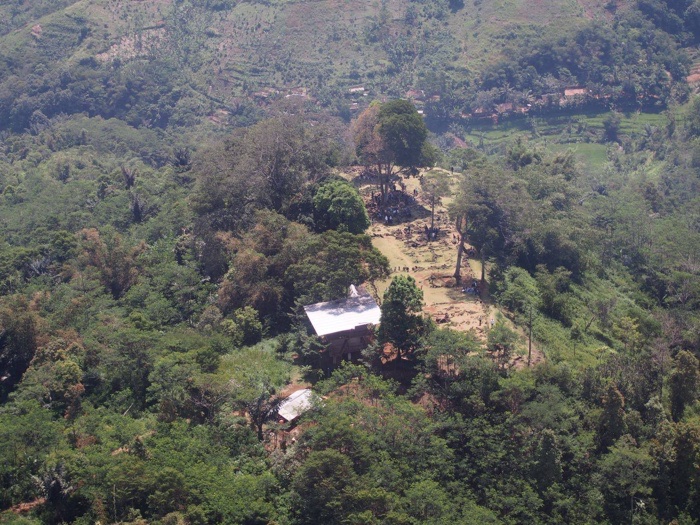 Still, not everybody is convinced. Natawidjaja’s research has been the subject of much controversy in Indonesia and elsewhere, with a large number of archaeologists and skeptics criticising the team’s methods and findings.

The latest research presentations – which, for now, remain non-peer-reviewed – will probably add fuel to the fire, but they also give the world a closer glimpse at what could be one of the world’s most ancient and mysterious structures.

As for what that structure really is, only time will tell.

The findings were presented at the annual meeting of the American Geophysical Union in Washington, DC last week.

Embers of an Ancient Inferno Pinpoint The Worst Extinction in Earth’s History
‘Polluted Realism’: How Monet’s Art Mirrors The Evolution of Smog
A Lost Interview With The ‘Father of The Big Bang’ Was Just Discovered
Physicists Used Sound Waves to Give a Tiny Sun Its Own Kind of Gravity
Could ‘The Last of Us’ Ever Happen? The Real Risks of a Fungus Pandemic