In Australia, snakes sometimes slither into suburban backyards and homes. When the weather gets warm, they lounge in the sun. When it gets hot, they seek cool places: a wall crevice, under a refrigerator, under a barbecue grill, behind an air-conditioning unit.

When it gets too hot and dry, they seek places with moisture, as some Australians are quickly learning.

Luke Huntley, a snake catcher in Queensland, had to remove snakes from people’s bathrooms, as the country experiences a record-setting heat wave.

Last week, he removed a seven-foot python that had slithered into an open door and climbed into the shower not only to escape the heat but also to find water.

Days earlier, he pulled a small tree snake that had coiled in another homeowner’s toilet bowl. 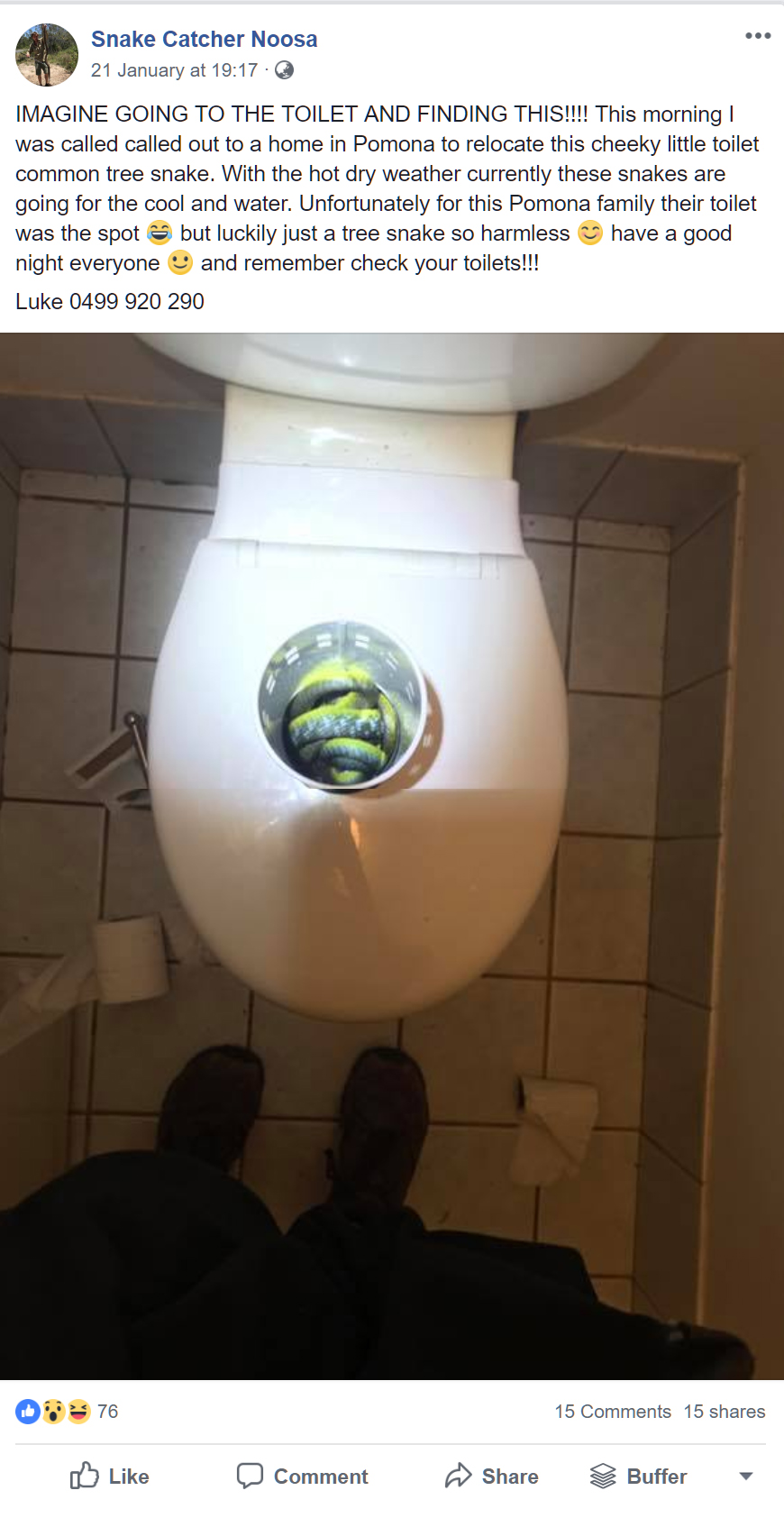 “With the hot days and dry weather, these snakes are trying to hydrate and stay cool just like us,” Huntley wrote on his Facebook page.

Also recently, an unsuspecting woman went into a dimly lit bathroom of a Brisbane home, not bothering to look into the toilet bowl. After she sat down, she felt a “tap” on her skin followed by a sharp pain, Helen Richards told the Australian Broadcasting Corporation.

She looked down and saw a python looking up at her.

As a polar vortex hits the US Midwest, the extreme opposite is happening in Australia.

Temperatures soared to 116 degrees Fahrenheit (47 degrees Celsius) on Thursday in Adelaide, South Australia. That’s the highest temperature for any capital in Australia, according to Fritz.

In the southeastern corner of the country, overnight temperatures were as high as 96°F (36°C) – the warmest overnight lows for January anywhere in the world.

Australia’s climate has warmed by about 2°F (1°C) since 1910, leading to more frequent heat waves and severe drought conditions, according to the Bureau of Meteorology.

Eight of Australia’s top-10 warmest years on record have happened in the past 13 years.

And with warmer weather come more snake sightings. Snake season starts in September, the beginning of spring in Australia. It goes on throughout the summer, from December to February.

Australia has around 140 species of land snakes. As cities and urban development encroach into snake habitats, residents – and their pets – are more likely to encounter snakes, particularly in the spring, University of Melbourne researchers said.

“As it warms up and we get a bit more sun, snakes come out to bask,” Timothy Jackson, a research fellow at the university’s Australian Venom Research Unit, said in September. “When they’re warm enough, they get hungry – they may not have eaten for months.”

Snakes, though, are not to be feared.

“This is nothing to be alarmed about, but it does give us an additional reason to pay attention to our surroundings because, as we all know, encounters with snakes don’t always end well,” Jackson said.

“It’s important to understand that this isn’t because snakes are out to get us. The last thing a snake wants to see when it’s out looking for a feed is a giant primate, dog or cat.”

Unfortunately, that has not always held true.

Huntley, the snake catcher, was called a couple of weeks ago to a home where a python ate a house cat.

Angela Fritz contributed to this article.

Astronomers Find What May Be a Habitable World 31 Light-Years Away
Wildfire Destruction in The Western US Has Doubled in Just 10 Years
Mysterious Medieval City in Africa Had a Genius System to Survive Drought
Tiny Radioactive Object Goes Missing in Australia, Sparks Urgent Search
Scientist Accidentally Discovers The Oldest Brain of Any Vertebrate