Pollution off the Pacific shoreline of the remote Kamchatka peninsula has caused the mass death of marine creatures, Russian scientists said Tuesday.

Locals sounded the alarm in late September as surfers experienced stinging eyes from the water and sea creatures including seals, octopuses and sea urchins washed up dead on the shore.

Coming on the heels of a massive oil leak in Siberia, the latest incident has sparked a large-scale investigation with fears that poisonous substances in underground storage since the Soviet era could have leaked into the water.

A team of divers from a state nature reserve found a “mass death” of sea life at a depth of five to 10 metres (16-33 feet), Ivan Usatov of the Kronotsky Reserve said, adding that “95 percent are dead.”

“A few large fish, prawns and crabs are left, but only a very small number,” the scientist said at a meeting with Kamchatka Governor Vladimir Solodov.

WWF Russia said in a statement that the pollutant appears not to be oil, but a “highly toxic transparent substance that is highly soluble in water.” 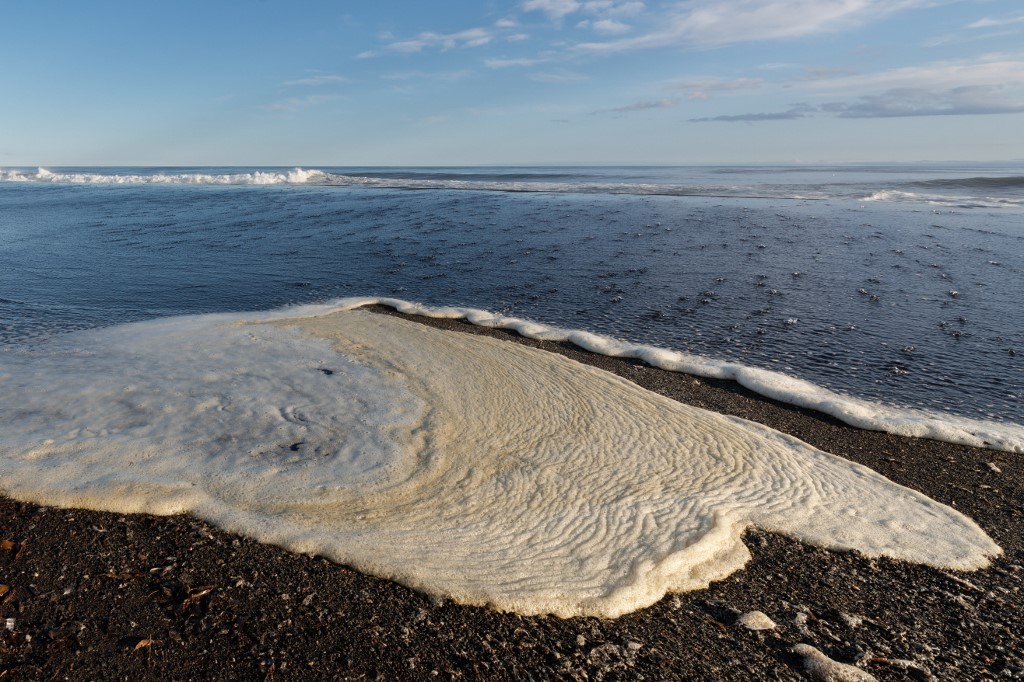 Foam is seen at the Khalaktyrsky beach in Kamchatka. (Alexandr Piragis/Sputnik/Sputnik via AFP)

Surfers suffered burns to their corneas after swimming in the water, the Kamchatka governor said earlier.

Kamchatka, renowned for its spectacular scenery and live volcanoes, teems with wildlife including brown bears. It is sparsely populated with just over 300,000 inhabitants.

Russian officials have launched a flurry of activity on President Vladimir Putin’s orders.

Putin in June publicly chided officials for being evasive and slow to act over a spill of thousands of tonnes of diesel into soil and waterways in Arctic Siberia.

Scientists are working to detect the source of the pollution, investigating theories including a natural effect from microscopic marine algae, but with a focus on potential manmade causes.

On Tuesday, experts took water and soil samples from a site called Kozelsky, used since the Soviet era to store poisonous substances deep in the ground.

“The most obvious answer where the source of the pollution could be is the Kozelsky poisonous chemical site,” said Solodov, after prosecutors, natural resources inspectors and criminal investigators visited the site and tested soil and water from a nearby river.

The site, opened in 1979 to store pesticides, today has no legal owner.

He said inspectors had found sections of barbed wire cut away and damage to a protective covering.

The unguarded site “just by official accounts contains around 108 tonnes of pesticides and poisonous chemicals,” Greenpeace Russia campaign director Ivan Blokov said in a statement. The group has a team at the scene testing the water nearby.

Eerie figures with giant heads found painted in a rock shelter in Tanzania
There’s a change happening to Earth’s outer core, as revealed by seismic wave data
If your kid suddenly loses the plot mid-conversation, this could be the reason
This giant kangaroo from 50,000 years ago isn’t even related to Australian ones
Researchers finally tracked down the source of the deadly Pacific Ocean ‘blob’