For weeks, the UK has been gripped by a punishing, record-breaking heatwave. While conditions on the ground may be unprecedented, what’s happening underneath it comes as an even bigger shock.

Aerial archaeologists combing the wilted Welsh countryside have discovered a transforming landscape revealing a forgotten legacy of ancient monuments – a faded map of centuries-old structures laid bare, at least for those high enough in the sky to see it.

“So much new archaeology is showing it is incredible.” 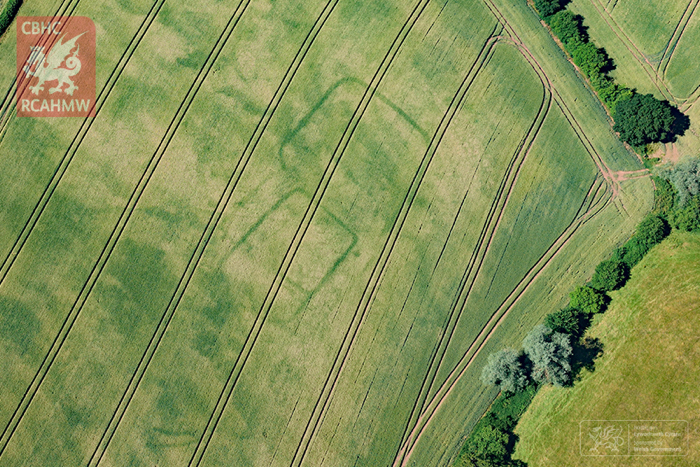 Seen as faint traces of various shapes on the parched landscape, these marks represent historical structures nobody even knew were there.

The unseasonably dry conditions persisting in Wales and elsewhere in the UK have rendered visible the ghostly foundations of countless former castles, forts, farms, mansions, and more – some of them dating back to the Iron Age and, others like emergent WWII air raid shelters, being much more recent structures.

Some of these apparitions – called ‘crop marks’ or ‘parch marks’ – reflect sites previously known to archaeologists and historians, but many of the older outlines represent fresh discoveries, only made possible by June and July’s brutal hot streak. “We have had periods of dry weather in the past, where crop marks and parching have exposed archaeology, but this current spell is really exceptional both in extent and longevity, and the last time it was to this extent was probably back in the 1970s,” senior archeologist Louise Barker from RCAHMW told Earther.

The reason these outlines are appearing on the ground is to do with the amount of water content in the soil.

A farmstead or villa (Toby Driver/RCAHMW)

Crop marks result from historic human activity that creates a hidden contrast in the earth: between fertile soil with access to water, and dryer or shallower soil with greater susceptibility to wan lifelessness.

Sometimes that contrast is the result of ancient ditches or moats that later get filled in with fresher soil, while sometimes it’s because rocky walls or foundations are still buried underneath the surface – and the thinner topsoil dries out more readily than its deeper, moister surrounds.

In either case, the distinction can remain invisible for years or decades at a time, until dry and hot conditions trigger a discernible contrast in the health of surface vegetation – as strikingly as the utterance of a secret Elvish command.

“For parch marks to appear circumstances have to be just right, but it is not uncommon,” archaeologist Ian Barnes with the British National Trust told the Irish Independent.

“The drought of 1976 is famous in British archaeology for revealing many previously unsuspected archaeological sites. 2018 could be a similarly productive year for new discoveries, buoyed by the advent of drone technology, which allows much easier access to aerial photography.”

The uniqueness of the opportunity means time is of the essence. For aerial researchers like Driver, these priceless windows into history won’t stay open forever.

“There has been such an extreme drought we’ve got sites of national significance emerging,” he told Cambrian News.

“It’s a race against time now… [Some] marks will probably only be there for another two-and-a-half weeks or so.”

Crocodiles Seem to Be Thriving in a Toxic River That’s More Like a Sewer. Here’s Why
Mummies With Golden Tongues Discovered in Ancient Egyptian Necropolis
More Strange Cosmic Threads Discovered Outside Our Galaxy, And They’re Huge
Volcanoes May Have Transformed Venus Into a Blistering Hellscape
Tiny Bubbles of an Ancient Ocean Found Trapped Inside Rocks in New York