If we want to predict our planet’s future under climate change, we must better understand what has happened on Earth before, even hundreds of thousands of years in the past.

New research into the Ethiopian Highlands during the Last Glacial Period helps do just that. As well as answering some geological questions, it has also raised up a new one: What created the gigantic stone stripes across the central Sanetti Plateau in the Bale Mountains?

As part of the research, scientists looked at moraine boulder samples in the Bale and Arsi Mountains, rocks that would once have been carried along by glaciers.

By studying their physical arrangement and measuring the extent of decay in an isotope of chlorine, they determined that past glaciations would not have been in sync with other similar stretches of mountains. 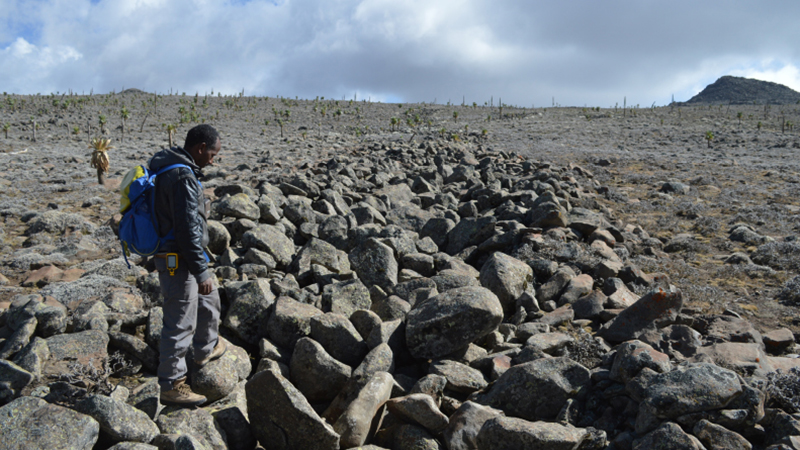 “Our results show that glaciers in the southern Ethiopian Highlands reached their maximum extent between 40,000 and 30,000 years ago, several thousand years earlier than in other mountainous regions in Eastern Africa and worldwide,” says glaciologist Alexander Groos from the University of Bern in Switzerland.

While these highlands aren’t packed with ice today, between 42,000 and 28,000 years ago – thousands of years before the most recent period in which ice sheets stretched far from the poles – they would have been topped by glaciers that covered as much as 350 square kilometres (about 135 square miles). The relatively early cooling and glacier onset is likely caused by variations in rainfall and mountain features, the researchers say.

In other words, temperature wasn’t the only driver of glacier movement across Eastern Africa during this time. Such insights can help us understand what might happen next, and what the impact on biodiversity and ecosystems is likely to be.

As for the massive stone stripes formed by boulders and basalt columns, they were discovered during the course of the research, just outside the area of the former ice cap. The stripes measure up to 1,000 meters (3,281 feet) long, 15 meters (49 feet) wide, and 2 meters (6.5 feet) deep, and haven’t been seen before in the tropics.

“The existence of these stone stripes on a tropical plateau surprised us, as so-called periglacial landforms of this magnitude were previously only known from the temperate zone and polar regions and are associated with ground temperatures around freezing point,” says Groos.

Another way in which the Ethiopian Highlands are different to their immediate neighbors then, in terms of what went down during the last ice age. The scientists think these stripes are the natural result of periodic freezing and thawing of the ground near the ice cap, which would have drawn similar rocks together. That would have required substantial drops in the ground and air temperature, however – and what’s less clear is whether this is typical of the way tropical high mountains cooled at the time, or whether it was a regional phenomenon.

We’ll need to wait for future studies of other regions to find out, but the research gives plenty for scientists to go on. Understanding climate shifts in the tropics is crucial – it’s where much of the circulation of the world’s atmosphere and oceans is driven from – and it would seem these mountainous regions might have experienced the Last Glacial Period in a variety of different ways.

“Our findings highlight the importance of understanding the local climatic setting when attempting to draw wider climatic interpretations from glacial chronologies,” conclude the researchers in one of their newly published papers.

The research has been published in Science Advances and Earth Surface Dynamics.

Alarming Spread of Bird Flu Continues as More Species Infected
The First Stars May Have Been Heavier Than 100,000 Suns
We Can Now Hear The ‘Sound’ of One of The Most Beautiful Stars
A Mysterious Whirlpool Appeared Over Hawaii, And It Could Be Because of SpaceX
AI Predicts We’ll Breach Our Climate Goal in Just 10 Years