Shellfish such as scallops, mussels, and oysters – bivalve molluscs – readily take up tiny specs of metals into their tissues and shells. In sufficient concentrations, this can harm their growth and survival chances, and even threaten the health of any human who eats their contaminated meat.

Such shellfish provide one-quarter of the world’s seafood, so the impact of pollution from the “heavy metals” such as lead, zinc, and copper, is hugely important.

We recently investigated the effects of metal pollution on the great scallop, Pecten maximus, for a new scientific study. This is a common species which supports the most valuable fishery in England and the third most valuable in the UK overall.

We first discovered these effects of pollution by chance. While carrying out routine stock assessment surveys around the Isle of Man, a self-governing island that lies between Britain and Ireland, we noticed that scallops found on the Laxey fishing ground off the east coast were much more likely to have lethally damaged shells than scallops from elsewhere.

Laxey is famous for the world’s largest working waterwheel, a spectacular example of Victorian engineering used to pump water from a mine which produced lead, copper, silver, and zinc.

The mine closed in 1929, but its legacy is that sediments in the rivers, estuary, and sea waters around Laxey are unnaturally high in metals.

It looked as though metal pollution may be responsible for the damaged shells we discovered. To test this hypothesis, we analysed the strength of scallop shells that had been collected from Laxey and other fishing grounds around the Isle in both 2004 and 2013.

In both groups, the shells from Laxey were found to be significantly weaker than those from all other areas.

A detailed analysis revealed the Laxey shells were proportionally thinner than shells found at other areas, and that the internal structure of shells contained a disruption, or fault line.

We were not able to detect metals in the shells themselves, but we think that even in low quantities the metals are either affecting the physiology of the scallops or disrupting chemical reactions during the mineralisation (shell-growing) process. 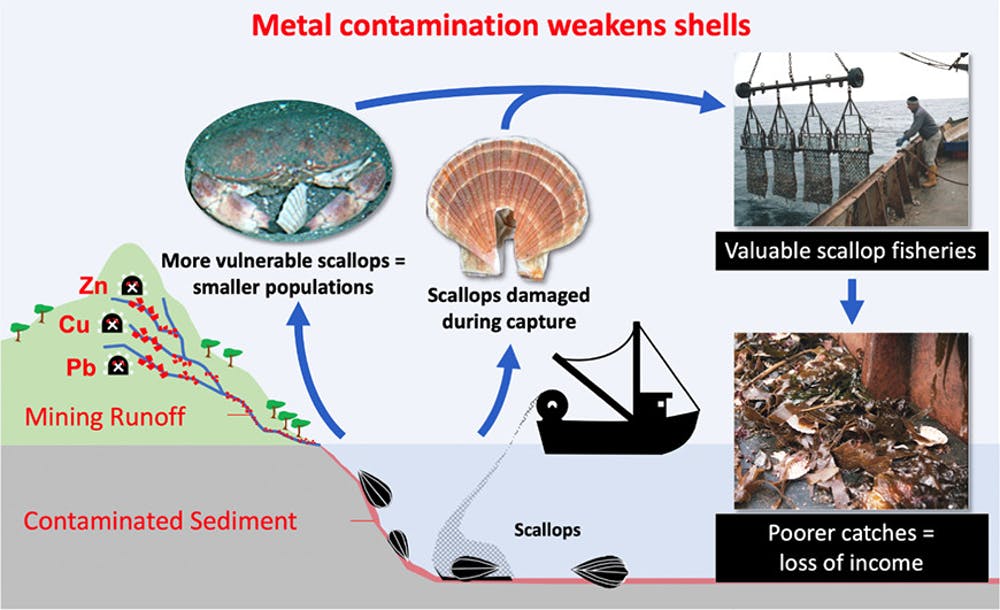 Scallops with unnaturally thin shells are also more likely to be damaged when being captured. (Stewart et al., Science of The Total Environment, 2020)

In ecotoxicology terms, what we observed is called a non-apical endpoint effect. Weakened shells don’t directly kill scallops, but instead leave them more vulnerable to mortality.

Such responses are rarely considered when assessing the effects of environmental contaminants, but could have significant implications.

This is a concern, because the levels of metal contamination we observed were generally below the current regulatory limits thought to affect marine life, and the scallops were considered perfectly safe to eat.

It is remarkable that mining from 100 years ago is still affecting marine life in this way.

But, given that metal contamination is a common and increasing threat in coastal areas around the world, and that many other shellfish and marine species such as corals produce calcified structures chemically-similar to scallop shells, we believe metals may be having unseen effects on a large scale.

We may therefore need to rethink how we assess and manage the risks of metal contamination.

Metals are a natural component of marine systems and in trace concentrations may be essential for supporting life. However, human activities have elevated their concentrations in many marine environments to the point where they have become toxic.

This pollution comes from a variety of sources such as run off from mining, agricultural and industrial activity; offshore oil and gas exploitation; and leaching of anti-fouling paint from ships hulls. As a result, metal pollution tends to be highest in estuaries, around ports, and in inshore waters.

Despite stricter recent regulations controlling the use of metals in marine environments, they continue to be an increasing threat. This is because heavy metals are highly persistent (they do not disappear over time) and ongoing coastal development and bottom-towed fishing gear are remobilising contaminated sediments.

Climate change is also exacerbating the threat because higher rainfall is increasing run-off from contaminated areas, and ocean warming and acidification is increasing the rate of uptake and toxicity of metals in seawater.

Most previous studies have concentrated on the direct effects of metals on shellfish survival or food safety. However, our new study has unearthed that even relatively low concentrations of metal contamination appears to be causing scallops to grow weaker shells.

This leaves the scallops more vulnerable to being eaten by crabs and lobsters and to disturbance from storms and fishing activity, with potentially substantial ecological and economic repercussions.

Mummies With Golden Tongues Discovered in Ancient Egyptian Necropolis
10 Days After Its Launch, Orion Has Successfully Entered Lunar Orbit
Eerie Video of Bizarre Sheep Phenomenon Has The World Running in Circles
Octopus Brains Evolved to Share a Surprising Trait in With Our Brains
This May Be The Oldest Example of a Brain, And It’s Not What We Expected