Diving to the bottom of the ocean is arguably harder than rocketing into space.

Hundreds of astronauts have left Earth, but you can count the people who’ve visited the very bottom of the ocean on one hand: James Cameron, Jacques Piccard, and Don Walsh.

Because of that, we don’t know much about what goes on in the deepest parts of the ocean, especially in the hellishly named hadal zone that’s 6,000 to 11,000 meters (3.7-6.8 miles) under the surface.

Although 45% of the world’s oceans exist in that zone, that part of the planet has been a mystery to us land dwellers.

Scientists from NASA and Woods Hole Oceanographic Institution (WHOI) have teamed up on a $US1.2 million, privately funded effort to research, design, and build a new robot to explore the hadal zone.

The group aptly named the new drone Orpheus, after the mythic Greek hero who dove to the depths of hell and serenaded Hades, the king of the underworld. Scientists hope that similarly, this Orpheus will one day find new bottom-dwelling sea creatures and snap photos of deep-sea life.

Diving that deep is hard. Scientists at WHOI thought their Nereus deep-ocean vehicle could get there in 2014, but the remote-operated machine was lost some six miles under the sea after just six weeks of exploration. So for this project, engineers from NASA’s Jet Propulsion Lab (like Leichty) are lending a hand.

Their goal is to create a drone submersible so small and so light that they will one day be able to shoot it into space to explore other oceans. Orpheus is the first step in that direction.

A first test of the drone submarine

The Orpheus drone is about the size of a backyard grill and weighs 600 pounds.

The team completed the first untethered, autonomous test of the new drone in September, just outside Cape Cod Bay. The robot went 176 meters (roughly 577 feet) below the surface, which is still far above the hadal zone, so it’s clear Orpheus isn’t ready for prime time yet.

“There’s a lot of work that we need to do on improving the autonomy of it to be able to carry out more complex missions,” Leichty said. That’s especially true when it comes to navigating underwater and making sure “not to run into things,” he added.

Orpheus is equipped with four Go-Pro like cameras (with flashes), both to help the vehicle navigate on its own and to capture the scenery.

“I guess a good analogy is maybe how with your phone, you can take a panoramic picture,” Leichty said. “We’re trying to do that same thing, but at the bottom of the ocean.”

OceanX/Bloomberg Philanthropies, one of the funders of the mission, released new video of the quest on Wednesday:

During the 577-foot-deep test dive, Leichty said, Orpheus’s cameras glimpsed some “crab-like” and “tube-shaped” creatures. The team at WHOI also combined 40 images of the sea floor that Orpheus captured to create a 3-D mosaic.

Communications from Earth’s surface can take longer to reach the sea floor than the moon. So the Orpheus drone is completely autonomous – when it decides (on its own) to come up for air, it releases a couple of steel weights that fall to the sea floor, allowing the machine to float up to the surface. Ideally, the drone will do this when it has completed its mission or if it times out.

“Hopefully it runs and goes, does its mission, and then returns to the surface and tells you where it is to be retrieved,” Leichty said.

If something goes wrong, the weights on the vehicle are designed to rust off within about a day, which would force the orange explorer back to the surface. 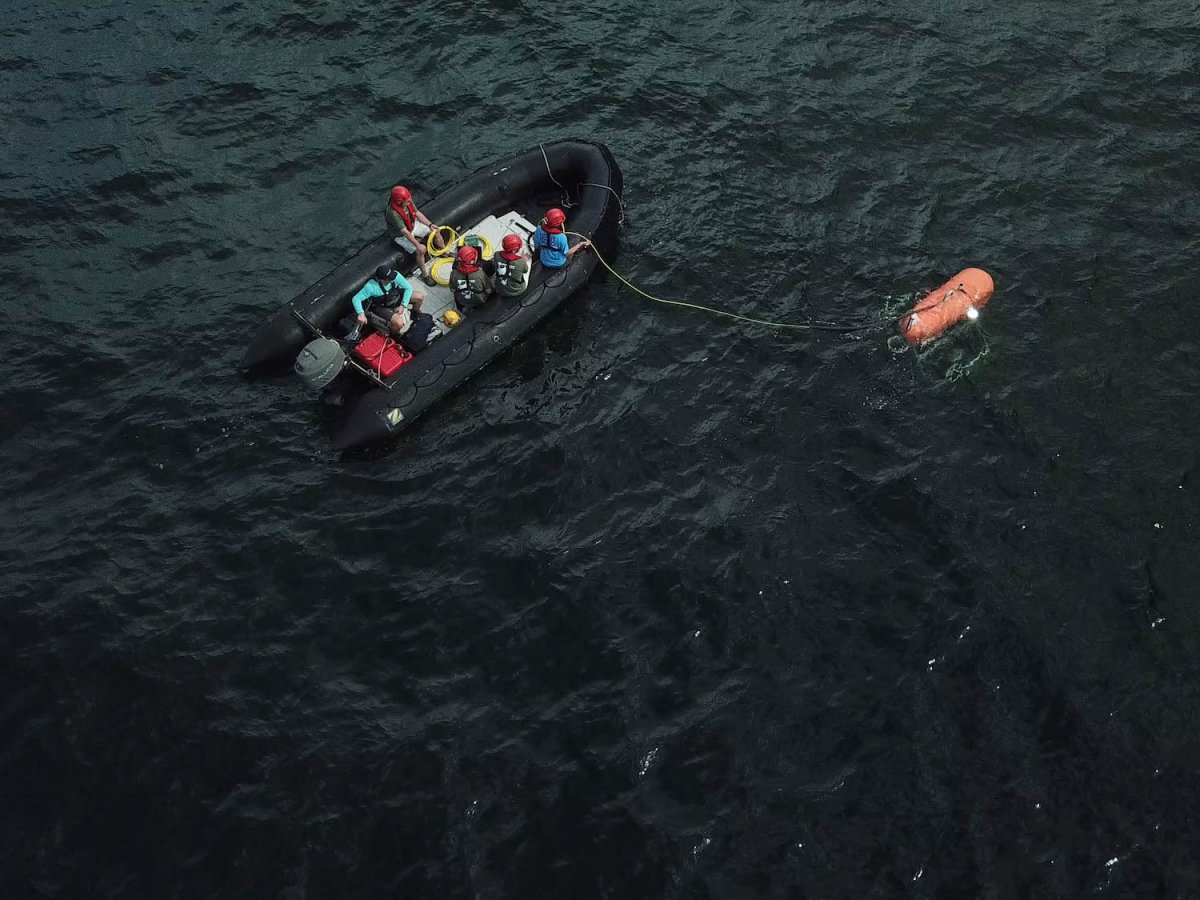 Searching for new kinds of life on Earth and in space

In the hadal zone, where Orpheus will one day travel if all goes to plan, the pressure can reach 16,000 pounds per square inch (psi), which is more than a thousand times the pressure at sea level (14.7 psi).

That’s not a place NASA has tended to care much about in the past – “NASA doesn’t really do ocean exploration,” Leichty said – but the pressure at the bottom of Earth’s oceans happens to be remarkably similar to the pressure on Jupiter’s tantalizingly watery moon, Europa.

“The ocean of Europa – that is thought to be one of the most likely places for life to exist right now, not just maybe in the past some time,” Leichty said.

That makes the Jovian moon a ripe place to search for aliens.

But before a mission to Europa ever becomes possible, scientists must learn how to recognise and observe forms of life that might thrive at such pressures, so that researchers don’t wind up ignoring an unknown sign of life that’s right in front of their eyes. The ability to recognise living beings at the bottom of the ocean – the otherworldly animals that thrive inside long, narrow ocean trenches – is one of Shank’s biggest concerns.

“How did trench animals come to be?” Shank wonders. “Did life start in the trenches and then migrate out of the trenches? Or did it migrate into trenches and get caught there and stay there?”

Many of the spots on Earth that the Orpheus team wants the drone to explore are near the planet’s subduction zones, where areas of the sea floor get pushed below continental crust and lava flows.

Submarine volcanoes are far more common than eruptions on land, and sizzling underwater vents sprout up in the areas where lava churns, creating an environment where life can thrive. Scientists didn’t realise these vents even existed until 1977.

Shank is convinced the team will find never-before-seen microbes in areas near these deep-ocean vents. That could lead to the development of new antibiotics and other drugs, as well as new ways of thinking about the necessary conditions for life.

Orpheus is designed to be a kind of ocean-floor detective in such areas; it’s being outfitted with sensors to detect methane, hydrogen sulfide, and helium, which are all promising ingredients for life.

“Animals like tube worms and clams and mussels and shrimp and snails love the hydrogen sulfide,” Shank said.

Unlike other underwater vehicles, Orpheus is designed to sit right on the sea floor and sniff these creatures out.

“Then it will pick up off of the sea floor and, like a grasshopper, land again somewhere else,” Shank said.

Eventually, the plan is for Orpheus to be joined by a fleet of other grill-sized drones. Shank referred to this as an “armada,” and said the troupe of about 20 drones would sniff around the deepest corners of world’s oceans for clouds of hydrogen sulfide, then zero in on them, land, and snap photos.

“These areas are going to be the next thing that will change the way we think about how life can exist on Earth – or any other planetary body,” he said.