The news this week was shocking: Earth’s atmosphere hit a catastrophic new peak of carbon pollution. But one company wasn’t shocked. It saw this dark future coming a long time ago.

As far back as 1982 – 37 years ago – scientists working for oil and gas giant Exxon expertly predicted the shape of climate change to come.

With chilling, unnerving prescience, they foretold the very future of human-made global warming and plotted its calculable trajectory. Then, they buried it.

This is not an allegation. It’s a documented fact: look at the graph they made. Marvel at how foresightful they were:

Almost 40 years ago, Exxon’s scientific team predicted exactly where we were headed if we kept burning fossil fuels, and their estimates line up almost perfectly with actual contemporary readings of carbon dioxide (CO2) pollutants heating up the planet right now: 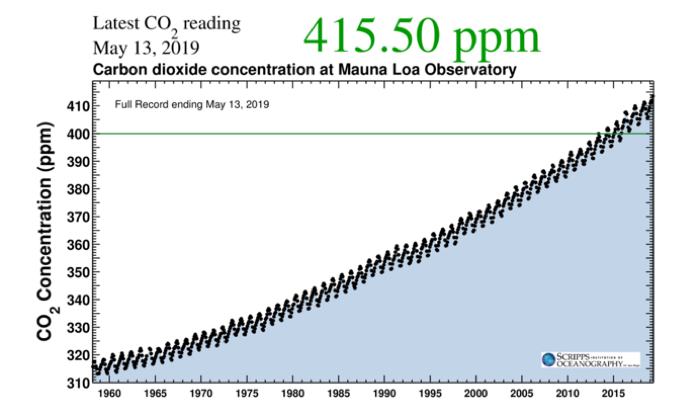 A few years ago, our atmosphere surpassed the threshold of 400 parts per million (ppm) of CO2. This wasn’t good. But soon after, we hit 410 ppm, and then, last weekend – for the first time in millions of years – levels exceeded 415 ppm.

Each time that ppm number goes up, it means the skies above us have become thicker with the CO2 pollutants that are making our planet dangerously hot.

If there were any doubt, and there really shouldn’t be by this point, that’s the exact opposite of what we’re trying to achieve.

What all this means – apart from the fact that we’re running out of chances – is that, as far as Exxon is concerned… everything’s going perfectly to plan.

In the early 1980s, the company that’s now called ExxonMobil had its scientists produce a “technical review” on the “CO2 ‘greenhouse’ effect which is receiving increased attention in both the scientific and popular press as an emerging environmental issue”. It was finished on 1 April 1982.

The document, which was intended to be “restricted to Exxon personnel and not distributed externally”, might never have surfaced and been seen in the outside world, if not for investigations by InsideClimate News. In 2015, this outlet won journalistic acclaim for a major series of reports on Exxon’s simultaneous knowledge and active denial of climate change phenomena over the course of four decades, including extensive funding and lobbying efforts.

This has included funding so called “think tanks” like The Heartland Institute in the US and the Institute of Public Affairs in Australia, who work closely with governments or in some cases even have actual politicians as their members.

In that eight-month-long investigation, a cavalcade of secret Exxon documents was dug up, including the 1982 report, which accurately gauged that CO2 levels would be approaching 420 ppm in the year 2020: almost exactly where we will be in a year’s time, given the concentration is currently increasing by about 3 ppm annually.

Of course, as the Exxon graph shows, the company’s scientists also projected how this CO2 increase would pair with an accordant surge in global temperatures – although the researchers expressed ambivalence over what this might mean for our future.

“Considerable uncertainty also surrounds the possible impact on society of such a warming trend, should it occur,” the report states.

“At the low end of the predicted temperature range there could be some impact on agricultural growth and rainfall patterns … At the high end, some scientists suggest there could be considerable adverse impact including the flooding of some coastal land masses as a result of a rise in sea level due to melting of the Antarctic ice sheet.”

Ultimately, despite anticipating “potentially serious climate problems”, the researchers suggested these issues would not occur “until the late 21st century or perhaps beyond”, and as such concluded it would be “premature” to make “significant changes in energy consumption patterns now to deal with this”.

Four decades later, we can only shake our heads – and resolve to not let more time slip away before we change our ways.

Incredible ‘shrinking’ planets could be a missing link between worlds
‘Structured water’ is not what people claim. Don’t believe the hype, scientist says
Humongous Sinkhole Appears in Chile, Leaving A Deep Void in the Desert
Warm waters are rushing towards the world’s largest ice sheet, scientists warn
‘Spiteful’ bacteria would rather starve their colony than let freeloaders thrive