These “hot particles” are not as stable as we once assumed. Our research shows they are likely releasing tiny chunks of plutonium and uranium which can be easily transported in dust and water, inhaled by humans and wildlife and taken up by plants. 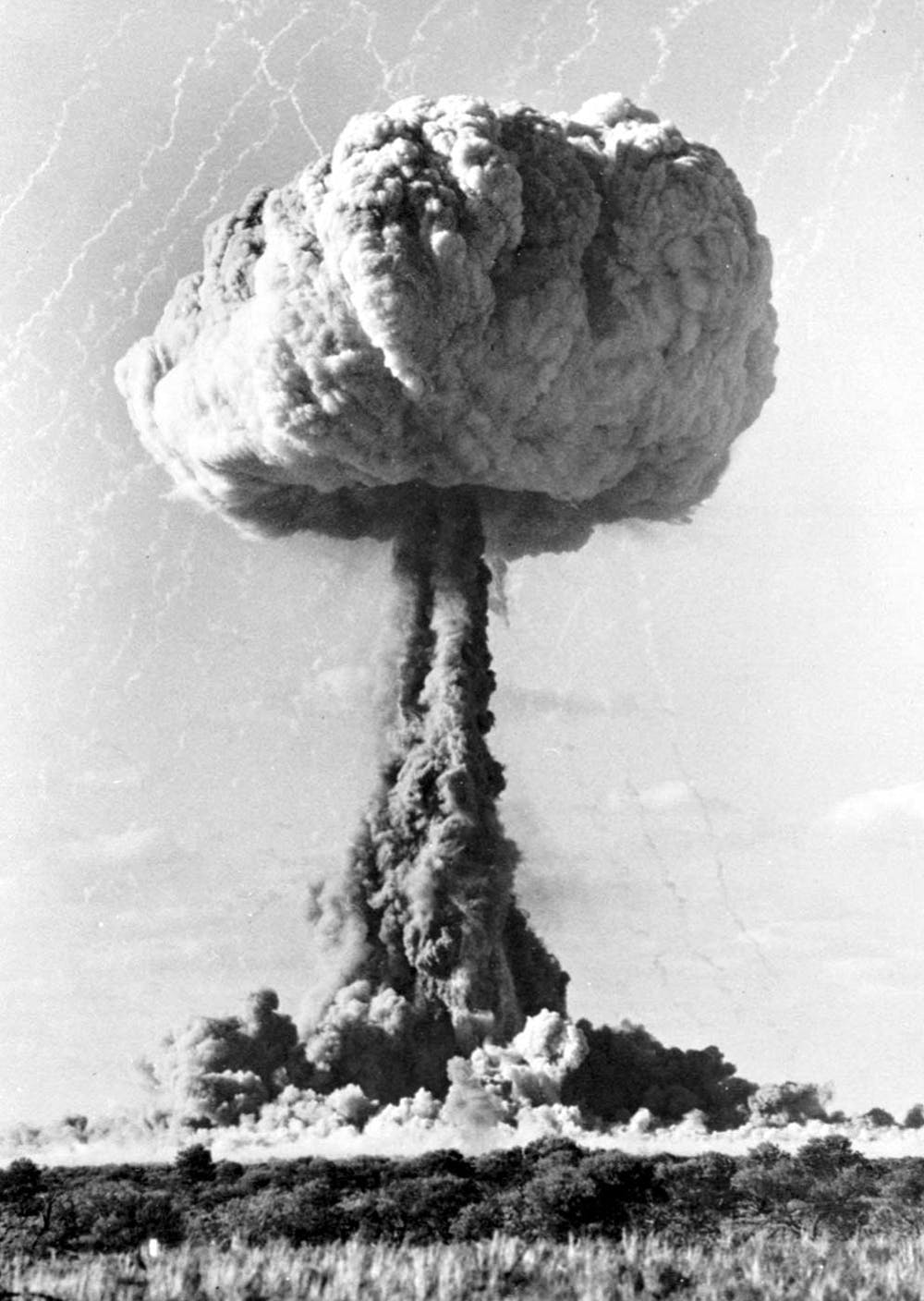 After the US atomic bombings of Hiroshima and Nagasaki in 1945, other nations raced to build their own nuclear weapons. Britain was looking for locations to conduct its tests. When it approached the Australian government in the early 1950s, Australia was only too eager to agree.

Between 1952 and 1963, Britain detonated 12 nuclear bombs in Australia. There were three in the Montebello Islands off Western Australia, but most were in outback South Australia: two at Emu Field and seven at Maralinga.

Besides the full-scale nuclear detonations, there were hundreds of “subcritical” trials designed to test the performance and safety of nuclear weapons and their components. These trials usually involved blowing up nuclear devices with conventional explosives, or setting them on fire.

These tests resulted in long-lasting radioactive contamination of the environment. The full extent of the contamination was only realized in 1984, before the land was returned to its traditional owners, the Maralinga Tjarutja people.

Despite numerous cleanup efforts, residual plutonium and uranium remains at Maralinga. Most is present in the form of “hot particles”. These are tiny radioactive grains (much smaller than a millimeter) dispersed in the soil.

Plutonium is a radioactive element mostly made by humans, and the weapons-grade plutonium used in the British nuclear tests has a half life of 24,100 years. This means even 24,100 years after the Vixen B trials that ended in 1963, there will still be almost two Nagasaki bombs’ worth of plutonium spread around the Taranaki test site.

Plutonium emits alpha radiation that can damage DNA if it enters a body through eating, drinking or breathing.

Until recently, we knew little about the internal makeup of these hot particles. This makes it very hard to accurately assess the environmental and health risks they pose.

Monash PhD student Megan Cook (the lead author on our new paper) took on this challenge. Her research aimed to identify how plutonium was deposited as it was carried by atmospheric currents following the nuclear tests (some of it traveled as far as Queensland!), the characteristics of the plutonium hot particles when they landed, and potential movement within the soil. 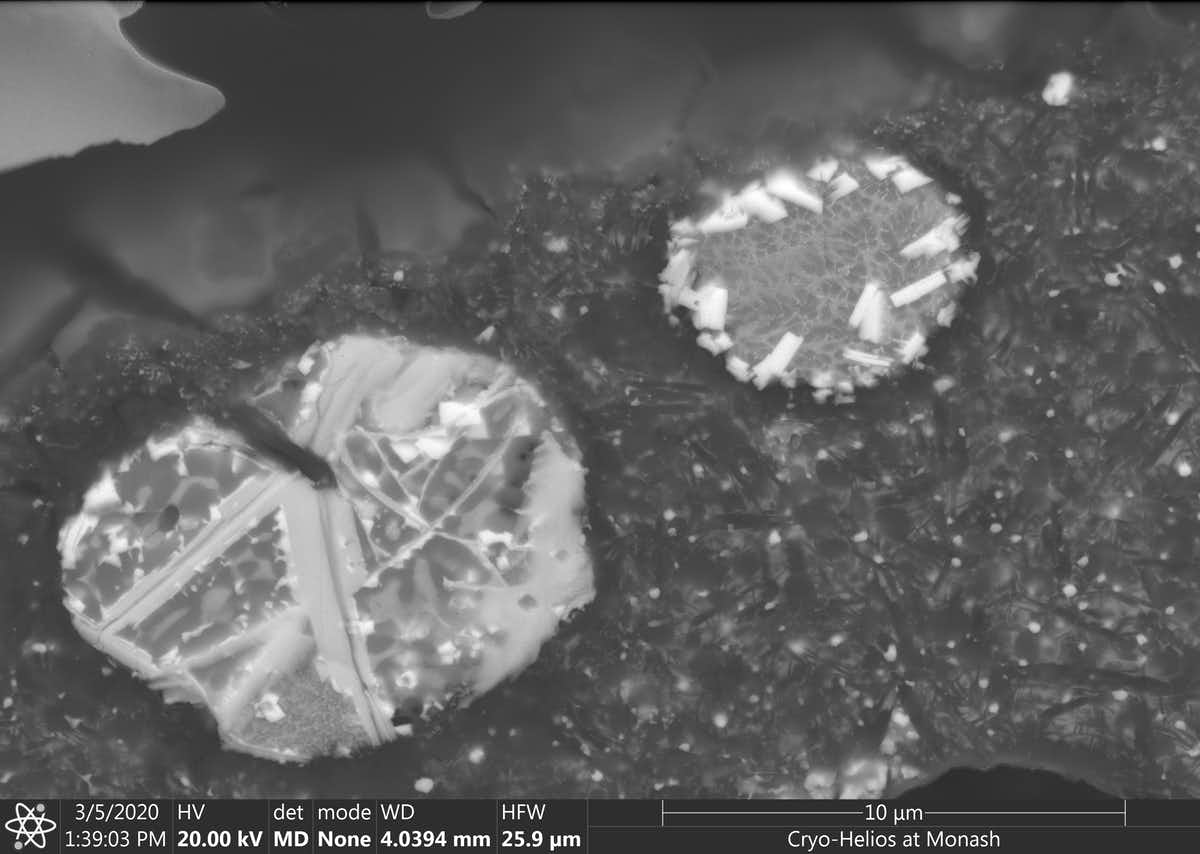 Above: Plutonium and uranium show up as bright lumps embedded in darker iron-aluminum alloy in this electron microscope image.

Nanotechnology to the rescue

Previous studies used the super intense X-rays generated by synchrotron light sources to map the distribution and oxidation state of plutonium inside the hot particles at the micrometer scale.

To get more detail, we used X-rays from the Diamond synchrotron near Oxford in the UK, a huge machine more than half a kilometer in circumference that produces light ten billion times brighter than the Sun in a particle accelerator.

Studying how the particles absorbed X-rays revealed they contained plutonium and uranium in several different states of oxidation – which affects how reactive and toxic they are. However, when we looked at the shadows the particles cast in X-ray light (or “X-ray diffraction”), we couldn’t interpret the results without knowing more about the different chemicals inside the particles.

To find out more, we used a machine at Monash University that can slice open tiny samples with a nanometer-wide beam of high-energy ions, then analyze the elements inside and make images of the interior. This is a bit like using a lightsaber to cut a rock, only at the tiniest of scales. This revealed in exquisite detail the complex array of materials and textures inside the particles.

Much of the plutonium and uranium is distributed in tiny particles sized between a few micrometers and a few nanometers, or dissolved in iron-aluminum alloys. We also discovered a plutonium-uranium-carbon compound that would be destroyed quickly in the presence of air, but which was held stable by the metallic alloy.

This complex physical and chemical structure of the particles suggests the particles formed by the cooling of droplets of molten metal from the explosion cloud.

In the end, it took a multidisciplinary team across three continents – including soil scientists, mineralogists, physicists, mineral engineers, synchrotron scientists, microscopists, and radiochemists – to reveal the nature of the Maralinga hot particles.

From fire to dust

Even under the semi-arid conditions of Maralinga, the hot particles slowly break down, liberating their deadly cargo. The lessons from the Maralinga particles are not limited to outback Australia. They are also useful in understanding particles generated from dirty bombs or released during subcritical nuclear incidents.

There have been a few documented instances of such incidents. These include the B-52 accidents that resulted in the conventional detonation of thermonuclear weapons near Palomares in Spain in 1966, and Thule in Greenland in 1968, and the explosion of an armed nuclear missile and subsequent fire at the McGuire Air Force Base in the USA in 1960.