The skies in Beijing turned orange recently, thanks to what was widely-reported as a massive sandstorm.

The problem, at least in terms of public health, is that it was not actually a sandstorm. It was a dust storm.

This might sound like an act of geological pedantry, but it represents a crucial difference, and it comes down to a question of size. Sand grains are mineral particles greater than 0.06 mm in diameter – the sort that scratches your ankles on a windy day at the beach and ends up spoiling the picnic by feeling crunchy in your sandwiches.

Beijing and other parts of northern China hit by biggest sandstorm in 10 years; at least 6 dead, 81 missing in neighboring Mongolia pic.twitter.com/rlJa0stgRf

Dust particles (or silt and clay as many geologists would term them) are those smaller grains, which would feel silky to the touch, and don’t scratch the skin. Crucially, these smaller, lighter grains may travel much, much further.

They are not reliant on the short-distance ballistic hops of the sand grains, but may find themselves suspended in a global atmospheric process that sees them transferred around the world. Sand will not readily blow hundreds of kilometers, or even around the world – dust will.

The grain size also matters as the finer dust particles – those less than 10 micrometers (pm10) and especially less than 2.5 micrometers (pm2.5) – are serious human health hazards, as they are small enough to be drawn deep into the lungs.

Dust storms in China have occurred since long before humans had a widespread impact on the landscape. During the repeated ice ages of the past 2.6 million years, huge volumes of dust were generated by the advance and retreat of ice sheets, settling to form deposits known as loess.

Over the millennia, these have accumulated to a thickness of up to 350 meters to form the Chinese Loess Plateau, covering an area larger than France. The loess is rich in mineral nutrients, and makes for productive agricultural soil. It is largely this farmland which is now being eroded again by the wind and recirculating as dust. 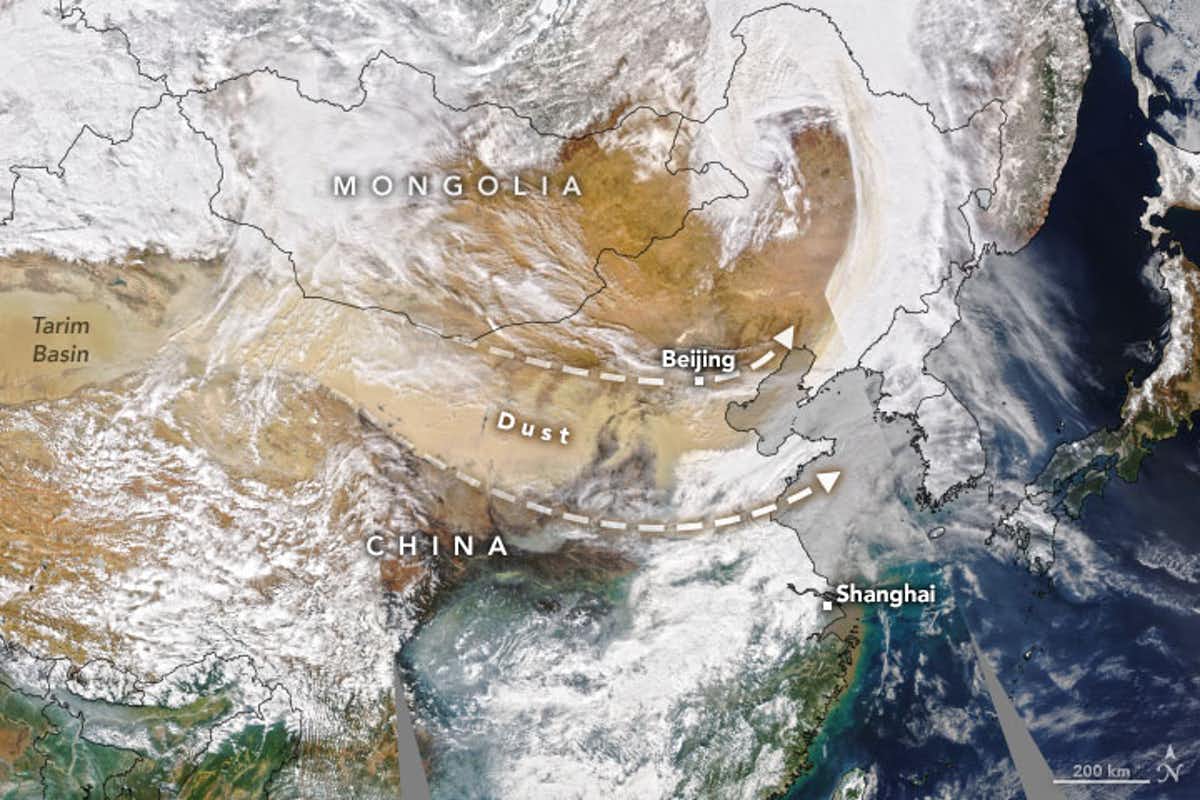 If we have seen such dramatic changes in the past, is the frequency of dust storms changing now? It is not wise to extrapolate from a single region such as China to the globe, as the pattern is complex and there is lots of variability even within the region.

Globally, the picture is equally complex. Studies in Israel have suggested an increase in dust storms in the past 30 years, whereas other research has implied a reduction in frequency in other regions.

So what is causing the present dust storms? Is this a purely natural process, or a function of climate change, or land mismanagement, perhaps? The answer is complex – and probably includes a little bit of each of these factors.

A recent study considered the combined role that different dynastic regimes and climate change have had on dust storm frequency in China over the past 2,000 years, and showed that an increase in dust storms coincided with both population increases and strengthened Asian monsoon circulation.

Paradoxically, the increased dust storm activity occurred during periods of increased rainfall, as it allowed dynasties to flourish and the population to grow, increasing demand for agricultural land clearance.

In other locations, the process is mostly natural. For instance, the remote and barely-habited Bodélé Depression in Chad, in the Sahara, is the greatest source of atmospheric dust in the world, despite its modest size.

This is thanks to the coincidence of hyper-arid desert conditions, a very erodible surface made of fine relic lake deposits and nearby mountains funneling wind across the surface.

It seems, on the face of it, a relentlessly bleak picture of landscape erosion, loss of productive agriculture land, atmospheric pollution and health impacts, yet there is a final aspect to the story of dust storms.

Their role in transporting crucial mineral nutrients, most notably iron, to the oceans has been recognized for some time, and so dust storms are sometimes considered “fertilizers” of the oceans’ phytoplankton – the base of most ocean food chains.

A 2014 study suggested more than three-quarters of dissolved iron in the northern Atlantic was derived from wind-blown Saharan dust, and other studies have suggested that Saharan dust plays a crucial role in fertilizing the Amazon rainforest with the nutrient phosphorus.

As such, the story of windblown desert dust, such as that seen over Beijing this week, is multi-faceted and global in scope.

A Mysterious Whirlpool Appeared Over Hawaii, And It Could Be Because of SpaceX
This Small Australian Marsupial Is Quite Literally Dying For Sex
Ancient Goo Spills The Secrets of How The Egyptians Mummified Their Dead
Wildfire Destruction in The Western US Has Doubled in Just 10 Years
We Can Now Hear The ‘Sound’ of One of The Most Beautiful Stars