It’s no secret that the world’s largest tropical rainforest, the Amazon, is under immense pressure, nearing an ecological tipping point and at risk of collapsing.

But the situation is much worse than perhaps we realize, according to new research that suggests the Amazon’s bleak future has arrived in the wake of rampant deforestation.

The new research – the most comprehensive assessment of the Amazon Basin’s influence on global climate to date – found that with fires, drought, and land clearing, the forest is releasing more heat-trapping gases than it stores in plants and soil.

This means the Amazon is most likely warming Earth’s atmosphere, not cooling it, and the worrisome effect is only expected to grow, says the group of over 30 scientists behind this work.

Moreover, the jungle can no longer be counted on to help offset greenhouse gas emissions from human activities, namely burning fossil fuels, that are squandering our remaining global carbon budget.

What sets this research apart is that unlike previous studies, this research tallies up all the climate-warming gases cycling through the Amazon Basin and into the atmosphere, and assesses the direct impacts of human activities on one of the largest carbon stores on Earth.

“Cutting [down] the forest is interfering with its carbon uptake; that’s a problem,” ecologist and lead author Kristofer Covey, at Skidmore College in New York, told National Geographic.

“But when you start to look at these other factors alongside CO2, it gets really hard to see how the net effect isn’t that the Amazon as a whole is really warming global climate.”

By and large, ecological studies and climate research on the Amazon Basin have focused squarely on the forest’s uptake and storage of CO2, and rightly so – CO2 makes up the bulk of humanity’s greenhouse gas emissions, which in the Amazon, are driven largely by forest degradation.

So severe is forest loss in the Amazon that some scientists have estimated the rainforest could flip from a carbon sink into a carbon source that releases more CO2 than it can hold as soon as 2035.

Researchers are also worried that with illegal land-clearing activities on the rise, the region is rapidly approaching a catastrophic ‘tipping point‘ where the Amazon is pushed to the brink and turns into a whole other, much drier ecosystem.

But CO2 is not the lone factor influencing Earth’s climate, and the Amazon Basin is not simple to study either, with its mountainous montane forests, mangrove wetlands, and river systems straddling nine countries in South America.

The two other big-name agents of climate change are nitrous oxide (N2O) and methane (CH4). These gases don’t last nearly as long in the atmosphere as CO2, but they are far more potent as greenhouse gases – trapping 300 times more heat per molecule than CO2, in the case of N2O.

Globally, emissions of both methane and nitrous oxide have increased substantially in the past decade or two. And now, with this analysis and the graphic below, we can appreciate how these lesser-studied gases tip the scales in the Amazon, specifically. 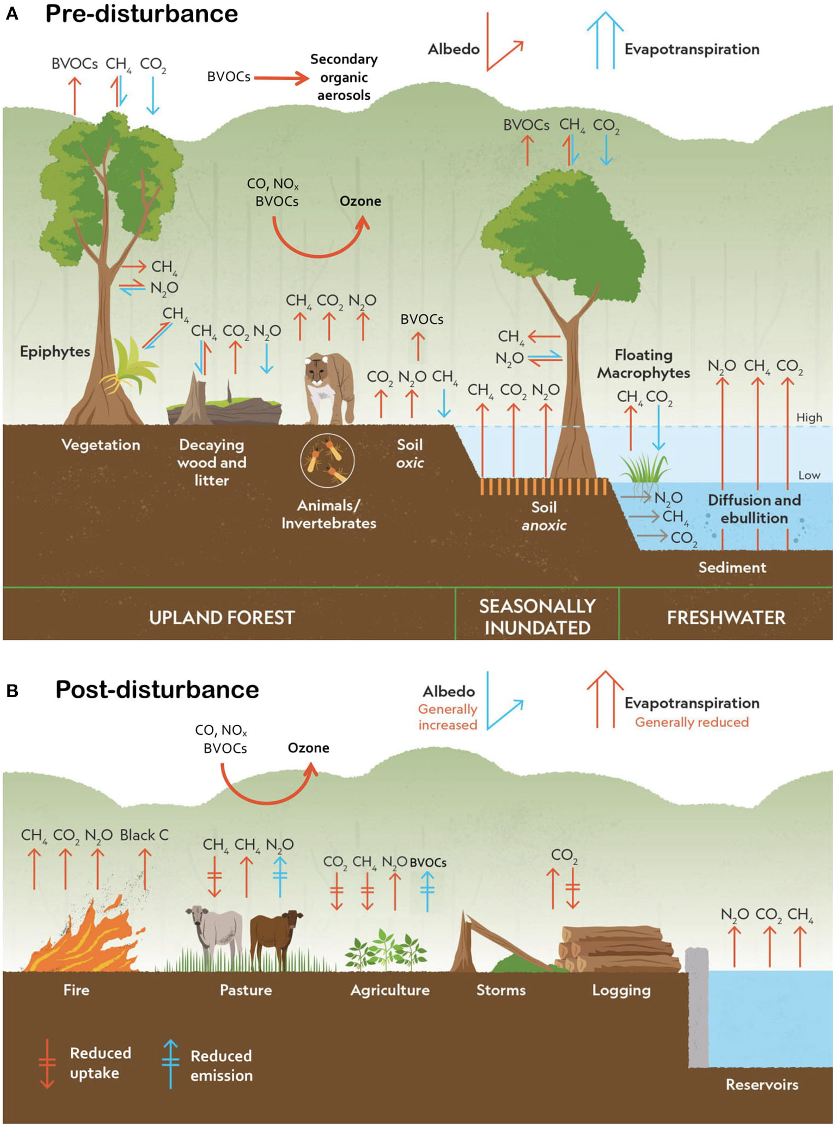 Above: Greenhouse gases cycling through the Amazon.

Analyzing existing data on greenhouse gas emissions and the combined effects of human impacts across the Amazon Basin, the researchers showed how the Amazon is probably worsening climate change by emitting more gases than it naturally absorbs.

Never before has a study of the Amazon Basin assessed data in such a way to consider the full suite of forest-climate interactions, which the study authors called a “daunting task” and “the central challenge limiting our understanding of the Amazon’s global climate impact”.

The ecosystem-wide analysis also gets deep in the gritty details, because given how huge the Amazon Basin is, even seemingly small changes in the amount of greenhouse gases absorbed or released by the forest (and its microbe-rich soils) add up to massive upheavals across the entire ecosystem.

Prolonged droughts decrease the Amazon’s ability to absorb CO2, and increase the chance of wildfires – which in 2019 burned at a record rate. Just like the illegal fires lit to clear land, these wildfires turn trees into soot particles that absorb sunlight and turn up the dial on atmospheric temperatures.

Meanwhile, industry-driven deforestation, up 60 percent since 2012 in the Brazilian Amazon, clears thousands upon thousands of square kilometers of forest each year for mining and agriculture, churning up soils, changing rainfall patterns, and increasing how much sunlight the Amazon reflects back into the atmosphere where greenhouse gases await.

Add to this equation dam building, extractive mining practices, seasonal flooding, severe storms, soil compaction for farmlands and grazing cattle – all of which are changing the forest and its emissions – and it’s understandable how the researchers were able to come to such a calamitous conclusion.

The team does acknowledge a large degree of uncertainty in their results, which they put down to a lack of data from some parts of the Amazon, especially its snaking river systems, and the unique ecological features of a forest so big it creates its own climate.

Yet even so, with the data that are available, the resounding result from their analysis is that the Amazon is releasing more heat-trapping gases than it stores, creating a net warming effect in Earth’s atmosphere.

Protecting the Amazon is now more urgent than ever before and that includes curbing deforestation and restoring Indigenous lands rights.

The research was published in Frontiers in Forests and Global Change.