For well over a thousand years, cherry blossoms in Japan have held the scent of spring and reflected the transient beauty of nature itself. Today, these falling flowers also carry the gravity of climate change.

In 2021, after an unusually warm spring, Kyoto has burst into color far sooner than expected. To date, this is the earliest cherry blossoms in the city have bloomed in more than 1,200 years.

We know that because imperial court documents and ancient diary entries on the nation’s cherry blossom festivals can be traced back to 812 CE. In all that time, the earliest blooming date was March 27 in the year 1409.

Over the centuries, the long-held tradition of cherry blossom viewing has grown from an aristocratic fancy to a fixture of Japanese life. Each year, from early to mid April, residents in Kyoto have held ‘hanami’ underneath the cherry trees to watch as hundreds of varieties of white and pink flowers bloom to their fullest.

Cherry blossoms are in full bloom.
I’m grateful to be able to see🌸 pic.twitter.com/XaYvodhwJT

While cherry blossoms in Kyoto may start to flower in March, their full bloom date – when the majority of buds are open to the skies – lies historically around April 17, although in the past century this date has retreated to April 5.

This year, before April even arrived, the moment had already passed. On Friday 26 March, officials announced cherry blossom trees in Kyoto had fully flowered.

“Evidence, like the timing of cherry blossoms, is one of the historical ‘proxy’ measurements that scientists look at to reconstruct past climate,” climate scientist Michael Mann told The Washington Post.

“In this case, that ‘proxy’ is telling us something that quantitative, rigorous long-term climate reconstructions have already told us – that the human-caused warming of the planet we’re witnessing today is unprecedented going back millennia.”

The flowering of the Japanese mountain cherry alone has been carefully detailed 732 times since the 9th century, representing the longest and most complete record of a seasonal, natural phenomenon from any place in the world.

Sifting through this 1,200-year-long series, scientists have mapped out a clear trend that looks very similar to climate change itself. As spring in the Northern Hemisphere arrives earlier with global warming, some plants and animals are also shifting their patterns of activity, including these blooms.

When scientists graph Kyoto’s full bloom dates over time, they look remarkably like the hockey stick shape of global warming itself. The flat part of the stick represents relatively stable cherry bloom dates in Kyoto, while the latter end shows a more rapid change in flowering events, as can be seen below. 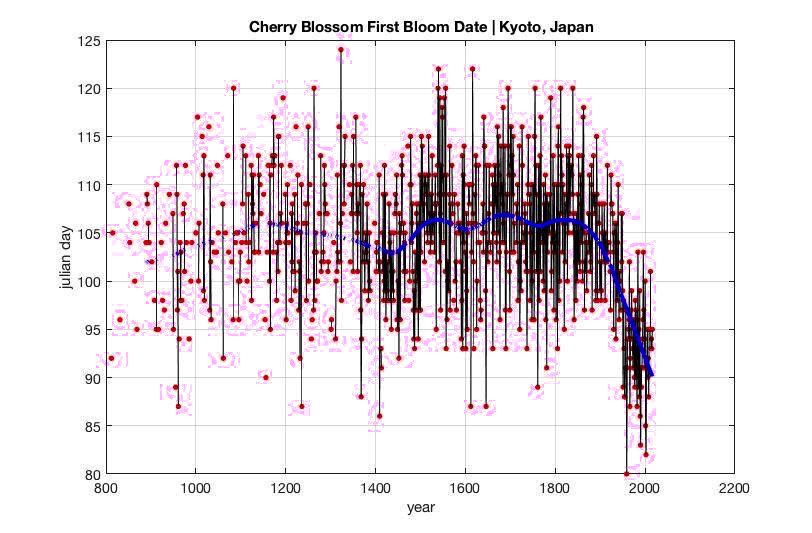 Since the 1830s, data show the Japanese mountain cherry tree has begun to flower earlier and earlier. Between 1971 and 2000, this specific type of tree was found to bloom on average a week earlier than all previous averages recorded in Kyoto.

Of course, these data are just for a single family of cherry tree in Japan; however, more recent records on cherry trees from 17 taxa have found similar rates of change. Over the past 25 years, these other species have begun blooming 5.5 days earlier on average, and scientists say this is mostly driven by warmer temperatures in February and March.

Nor is it just Kyoto where this is happening. This year in Tokyo, cherry blossom season has also arrived prematurely - 12 days earlier than historical records. In fact, this year ties with last year for the earliest bloom on record in Tokyo, joining the previous eight years in blooming well ahead of schedule of this city’s ‘normal’ March 25 date.

These changing blooms are throwing off many Japanese traditions that have held steady for hundreds of years. Future projections based on historical data suggest that by 2.5 °C warming, cherry blossoms will have already dropped in the mountainous city of Takayama, about halfway between Kyoto and Tokyo, by the time its annual spring festival rolls around.

Even cherry trees in Washington DC have begun to flower earlier after unseasonably warm springs. In 2020, the blooms here arrived roughly two weeks ahead of the long-term average of April 3 (recorded since 1921).

Under a mid-range emissions scenario, scientists estimate the peak bloom dates in this area of the United States will accelerate by an average of five days by 2050 and 10 days by 2080.

Unfortunately, plants and animals changing their patterns in response to climate change can put vital interactions between species out of sync with each other - such as blooms missing out on pollination. This shifting also creates havoc for farmers, because it is not always predictable – three weeks early one year may become one week late the next.

Of course, cherry blossoms aren’t the only plants affected by a rapidly warming world. The winter flowering of the Japanese apricot, for instance, has also shown recent changes associated with global warming. But most data on flora and fauna only go back a few decades.

Cherry trees in Japan, on the other hand, are considered the “best-documented examples of the biological effects of climate change in the world.”

As beautiful as these flowers appear, their blooms hold a much darker warning of what is to come.

Climate change has been killing rainforest trees for longer than we realized
Superconducting X-ray laser in California achieves temperatures colder than space
Extraterrestrial stone found in Egypt may be first evidence on Earth of rare supernova
The Moon will turn red tonight in a stunning ‘flower eclipse’. Here’s how to watch
Over 1,000 New Asteroids Discovered Hidden in Hubble Archives