Fish poop is full of carbon, and the ocean is full of fish poop. A new study estimates up to 16 percent of all the carbon in the world’s oceans come from fish faeces, fish breath, and other fish excretions.

That’s roughly 1.65 billion tons of carbon flushed into the depths each year, and all those droppings are part of what makes the ocean the largest active carbon sink in the world.

While there’s considerable evidence to date that krill and zooplankton help sequester carbon from the surface to the ocean deep, fish have only recently emerged as a crucial player in that biological ‘pump’.

“Our study is the first to review the impact that fishes have on carbon flux,” says ocean ecologist Grace Saba from Rutgers University-New Brunswick.

Because there aren’t many studies out there on the amount of fish carbon in regional let alone global waters, Saba admits there’s a large amount of uncertainty in their new estimates.

Further research is desperately needed on the absolute abundance of fish, their collective biomass, and their role in carbon transport to improve current estimates, but this review is a good and necessary start.

Together, researchers analysed five published studies on the passive carbon flux of fish poops, and fewer than 10 studies on the active transport of fish faeces to deeper waters – all that they could find in the available literature.

In the end, the results suggest fish excrement is a potentially significant source of carbon for the deep ocean. In a single day, studies show long cylinders of fish faeces can sink or be carried thousands of metres, and these pellets are oddly resistant to decomposition in the water.

Creating a global model, researchers estimate fish could have roughly the same impact on total carbon flux as zooplankton, although estimates for the latter are far more certain.

“The passive and active downward transport of particulate and dissolved matter mediated by fishes are likely significant components of both organic and inorganic carbon flux in the ocean but the information is uncertain and incomplete,” the authors write.

“Even with the available information being from mostly short-term studies that exhibit high reported variability among specific locations, the evidence is suggestive of a larger role played by fishes in the carbon cycle than previously thought.”

Photosynthetic plankton are said to be the backbone of ocean ecosystems because they fix carbon dioxide into organic carbon through photosynthesis in the upper layers of the ocean, where sunlight can still reach.

This organic carbon can then either sink passively into the ocean or it can be actively consumed and carried by bacteria, zooplankton or fish into deeper water. It can also be pumped down through diffusive transport when the carbon dissolves or is ‘breathed’ out by these same organisms.

Once that organic carbon reaches the seafloor, it can then be used by the benthic creatures that live in the deep. 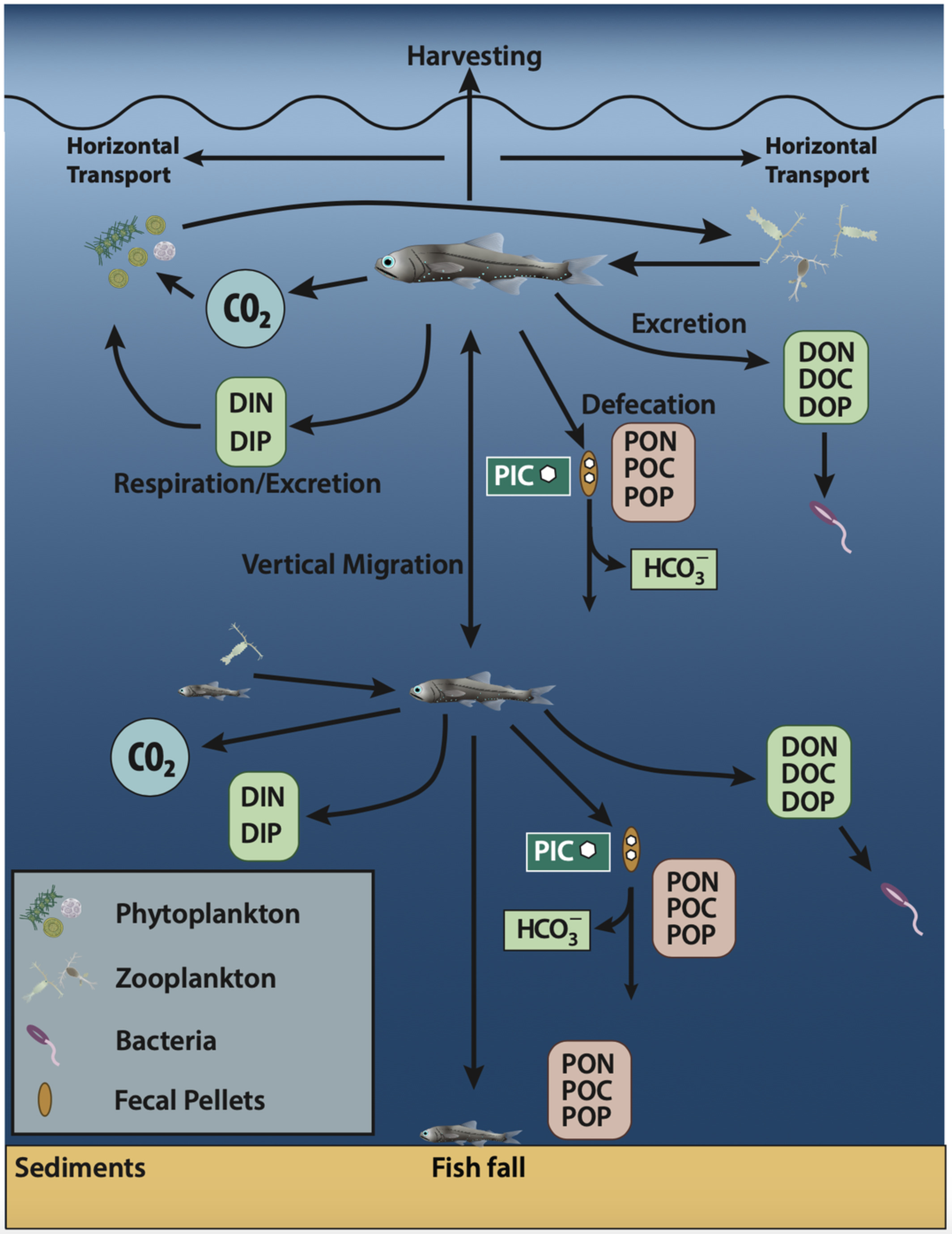 “Carbon that makes its way below the sunlit layer becomes sequestered, or stored, in the ocean for hundreds of years or more, depending on the depth and location where organic carbon is exported,” says Saba.

“This natural process results in a sink that acts to balance the sources of carbon dioxide.”

Above this point, carbon can be reintroduced to the atmosphere through seasonal or yearly circulation of ocean waters, which means it’s a threat to our current climate crisis.

Fish appear to be vital in storing ocean carbon in deeper parts, whether it be through their own biomass, active migration, respiration or passive pooping, and yet without more data, it’s impossible to say how vital these creatures are with any certainty.

Ultimately, this means we don’t know what effect climate changes or continued harvesting of fish will have on the rate or magnitude of carbon flux in our oceans

Given the many threats that face our fish stocks, further research on the biomass of fish and associated carbon fluxes is timely, the authors argue.

Future studies on how deep-sea mining could potentially impact the deep ocean’s carbon storage is an “especially high priority“, they add.

If the biological pump that transports carbon from the surface to the ocean deep begins to slow down or carry less organic matter, it could be catastrophic to the environment and to human society.

Some recent studies have attempted to put a number on how much money would be lost if the ocean’s carbon pump slipped into decline. Increasing carbon emissions for the North Atlantic were found to cost somewhere between US$170 and $3,000 billion for mitigation, and between $23 and $401 billion in adaptation. And that’s just one ocean.

“Based on the current fragmented data, it is impossible to estimate the total significance of fish carbon, but this figure is absolutely worth knowing,” wrote one of the authors, marine biologist Angela Martin in 2017.

“Protecting marine ecosystems and organisms to enhance their contribution to carbon capture and storage might just be a cost-effective, cross-cutting and high impact component of broader climate change mitigation and adaptation plans.”

The study was published in Limnology and Oceanography.