The remains of a 1,200-year-old pagan temple to the Old Norse gods such as Thor and Odin have been discovered in Norway – a rare relic of the Viking religion built a few centuries before Christianity became dominant there.

Archaeologists say the large wooden building – about 45 feet (14 meters) long, 26 feet (8 m) wide, and up to 40 feet (12 m) high – is thought to date from the end of the eighth century and was used for worship and sacrifices to gods during the midsummer and midwinter solstices.

Old Norse culture was famous and feared by some a century later, after bands of Norse sailors and warriors known as the Vikings started trading, raiding and colonizing throughout Europe and into Iceland, Greenland and Canada.

This is the first Old Norse temple found in the country, said archaeologist Søren Diinhoff of the University Museum of Bergen.

“This is the first time we’ve found one of these very special, very beautiful buildings,” Diinhoff told Live Science. “We know them from Sweden and we know them from Denmark. … This shows that they also existed in Norway.”

The Norse began building these large “god houses”, as they’re called, in the sixth century. The god houses were much more complex than the simple sites, often outdoors, that the people previously used to worship the Old Norse gods.

“It is a stronger expression of belief than all the small cult places,” he said. “This is probably something to do with a certain class of the society, who built these as a real ideological show.”

Archaeologists unearthed the foundations of the ancient building last month at Ose, a seaside village near the town of Ørsta in western Norway, ahead of preparations for a new housing development. 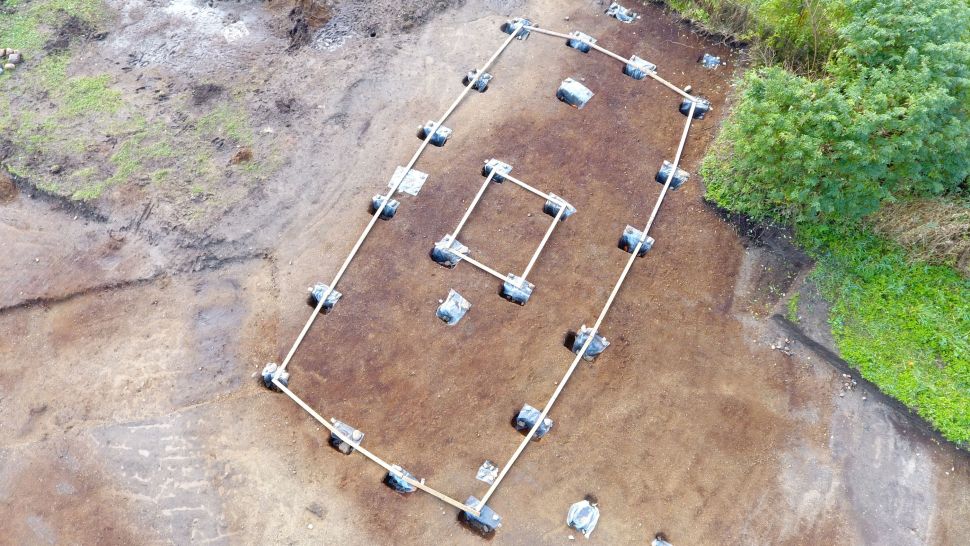 Post-holes that show its distinctive shape. (University Museum of Bergen)

Their excavations revealed traces of early agricultural settlements dating to between 2,000 and 2,500 years ago, including the remains of two longhouses that would have each been the center of a small farm for a family and their animals, Diinhoff said.

The remains of the god house at Ose, however, are from a later time when the area began to be dominated by an elite group of wealthy families – a distinction that arose as Scandinavian societies began to interact with the more stratified societies of the Roman Empire and the Germanic tribes of northern Europe.

“When the new socially differentiated society set in, in the Roman Iron Age, the leading families took control of the cult,” he said.

Norse religious worship became more ideological and organized, and god houses at Ose were patterned on Christian basilicas that travelers had seen in southern lands, he said.

As a result, Old Norse temples featured a distinctive high tower above the pitched roof, which was a copy of the towers of early Christian churches, he said.

Although the wooden building is now long-gone, the post-holes that remain show its shape, including the round central posts of its tower – a very distinctive construction that was only ever used in god houses, Diinhoff said. “It would have been very impressive.”

The purpose of the site is also revealed by a concentration of cooking pits where food for religious feasts was prepared, and numerous bones – the remains of animal sacrifices.

A large white “phallus” stone, roughly representing the male genital organ, was also found nearby several years ago and was probably part of the Old Norse fertility rituals, Diinhoff said.

Ceremonies would have been held in the god house for important festivals on the religious calendar, such as the midsummer and midwinter solstices – the shortest and longest nights of the year, respectively.

Meat, drink and sometimes precious metals like gold would have been offered to wooden figurines within the building that represented the Old Norse gods – in particular the war god Odin, the storm god Thor, and the fertility god Freyr, who were commonly worshipped in the Old Norse religion and gave their names in English to Wednesday, Thursday and Friday.

As the gods could only partake of the festival food in spirit, the physical food and drink would be enjoyed by their worshippers. “You would have a good mood, a lot of eating and a lot of drinking,” Diinhoff said. “I think they would have had a good time.”

The Old Norse religion was suppressed from the 11th century, when Norway’s kings forcibly imposed the Christian religion and tore down or burned buildings like the god house at Ose to enforce worship in the new Christian churches.

So far, there’s no evidence that the god house at Ose was part of that purge, Diinhoff said.

Further work could reveal the house was among the pagan buildings destroyed at the time. “It would be ideal if we could explain that,” he said. “But we’re not there yet.”

Astronomers Spot The Biggest Galaxy Ever, And The Scale Will Break Your Brain
Giant Asteroid Unleashed a Devastating Martian Megatsunami, Evidence Suggests
Forests at Risk of Burning an Extra 30 Days a Year Without Climate Action
Ancient Drains Under The Colosseum Reveal The Bones of an Unlikely Gladiator
Ant Babies Ooze a Weird Kind of ‘Milk’, And The Whole Colony Slurps It Down