Seventeen decapitated skeletons dating back about 1,700 years have been discovered in three Roman cemeteries at Knobb’s Farm in Cambridgeshire, in the UK.

Archaeologists who excavated the site think that the people were executed for violating Roman laws. However, scholars not affiliated with the research expressed mixed views about this explanation.

The cemeteries hold the burials of 52 people, and the 17 decapitated bodies include those of nine men and eight women and all over 25 years of age at time of death, a team of researchers reported in a paper published online May 19 in the journal Britannia. 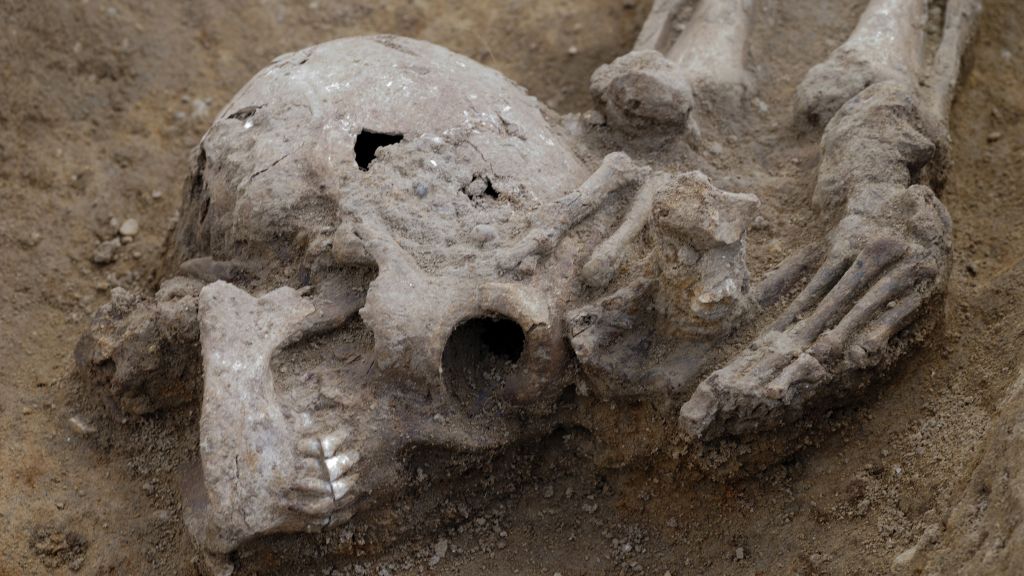 Many of their heads were buried at their feet. (Dave Webb/Cambridge Archaeological Unit)

In many cases, the heads of the decapitated individuals were buried beside their feet and pottery was placed where their head normally would have been. Some of the bodies were also placed prone (stomach down) in their graves.

Related: Photos of decapitated skeletons buried in a Roman cemetery

The researchers believe that the decapitated people were executed. They noted that the number of capital crimes in Roman law increased dramatically during the third and fourth centuries, around the time these skeletons were buried.

Surviving archaeological evidence suggests that the Roman military used Knobb’s farm as a supply center, and they would have dealt harshly with any infractions, the researchers said.

“During the third and fourth centuries, the penalties available under Roman law grew steadily harsher. The number of crimes that carried the death penalty grew from 14 at the start of the third century to around 60 by the death of Constantine in AD 337,” the researchers wrote in the journal article, noting that security concerns were one of the reasons for the increase in the death penalty.

During the third and fourth centuries there were numerous civil wars within the Roman Empire, with multiple people often fighting to be named emperor. Additionally attacks from so-called “barbarians” were a major concern at this time.

Despite possibly being executed, the individuals were still buried with pottery vessels and in some cases were placed in coffins.

“A decapitated female had by far the richest collection of grave goods, having been buried with two vessels and a necklace of cannel coal beads,” Isabel Lisboa, the archaeologist who led excavations, told Live Science. Cannel coal is a type of coal that lights up easily.

“Under Roman law, family and friends could request the return of the body of an executed criminal for burial,” the team wrote in the journal article.

If that policy were the case, it could explain why the executed individuals were allowed something approaching a proper burial.

The people executed were likely not slaves, as “slaves had no status” and likely would not have been given burials, much less coffins and grave goods, Lisboa said.

Live Science contacted several scholars not involved with the research to get their thoughts on the discovery. Many didn’t reply at the time of publication; but the few scholars who did expressed skepticism that Roman law had much to do with the execution of these individuals.

“What we know about the sites of Roman judicial executions suggests that they were principally at cities and towns, as public spectacle and for their deterrent effect,” said Simon Cleary, an emeritus professor of Roman Archaeology at the University of Birmingham in the UK, who noted that Knobb’s farm was not near any major town or city.

A law made by an emperor in Rome was hard to enforce in a distant location, Cleary told Live Science.

“Really, it was up to the local magistrates, landowners or state officials to do, or not do, what the emperor commanded,” Cleary said.

“If it [the decapitated burials] were the result of such legislation, then one would expect to find execution burials, particularly decapitations, all across the empire. This simply does not happen. Decapitation burials are almost entirely confined to Britain,” Cleary said.

“So unless Britain was an area which took imperial legislation far more seriously than the rest of the empire, this suggests that explanations within Britain need to be looked for,” Cleary said.

Cleary added that he thinks that it’s possible that these people were executed but that Roman law may have had nothing to do with the reasons why they were killed.

“By the fourth century the Roman army had for centuries literally been a law unto itself, with no come-back for civilians” said Cleary.

Why most decapitated burials in the Roman Empire occurred in Britain is unclear.

“Sometimes Roman Britain could be really, really weird, especially in the treatment of the dead – there are many other practices besides decapitated or prone burials that to our eyes look bizarre. To the eyes of people at the time they may have appeared perfectly comprehensible” said Cleary.

Other scholars also expressed doubts that Roman law had much to do with the decapitated burials.

“Personally, I think that it is highly unlikely that the executions at Knobb’s farm were anything to do with late Roman legal processes,” said Caroline Humfress, director of the Institute of Legal and Constitutional Research at the University of St. Andrews in Scotland.

“If they have a judicial context, it is more likely to be localized and related to summary executions,” that is an execution performed without a trial, Humfress told Live Science.

Still, other scholars thought that these people could have been executed in accordance with Roman law.

“Official executions would be carried out under the authority of the provincial governor, not local justice, and would reflect imperial ideas of criminality rather than local” ones, said Grubbs.

She noted that women in the Roman Empire were often targets for accusations of sorcery and adultery, both of which could be considered capital crimes by the Romans.

Excavation of the site was carried out between 2001 and 2010. The excavation was entirely funded by a company called Tarmac and took place before a quarry was expanded, Lisboa said.

Why did Rome fall?

In Photos: Ancient Home and Barracks of Roman Military Officer

Photos: Gladiators of the Roman Empire

A Lost Interview With The ‘Father of The Big Bang’ Was Just Discovered
Incredible Footage Shows Planets Circling a Star Light-Years Away
Stunning Green Comet Will Be Closest to Earth Today, at Peak Brightness
A Mysterious Whirlpool Appeared Over Hawaii, And It Could Be Because of SpaceX
Scientist Accidentally Discovers The Oldest Brain of Any Vertebrate