A procession of floats carried the mummified remains of 22 pharaohs, including Egypt’s most powerful ancient queen, through Cairo Saturday evening, in an eye-catching parade to a new resting place.

Under hefty security, the mummies were driven on floats seven kilometers (four miles) across the capital from the iconic Egyptian Museum to the new National Museum of Egyptian Civilisation.

Dubbed the “Pharaohs’ Golden Parade”, the 18 kings and four queens travelled in order, oldest first, each aboard a separate vehicle decorated in ancient Egyptian style. 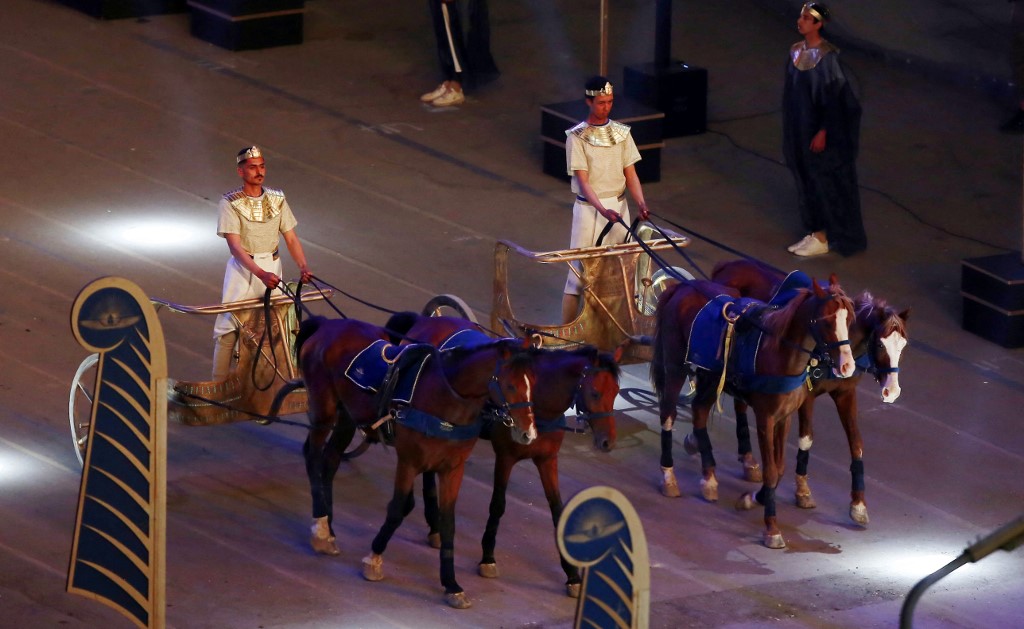 Both pedestrians and vehicles were barred from Tahrir Square, site of the current museum, and other sections of the route.

Images of the slick parade and an equally carefully choreographed opening ceremony were broadcast live on state television, to rousing music.

The mummies entered the grounds of the new museum to a 21-gun salute, after a slightly shorter than expected journey time of around half an hour. 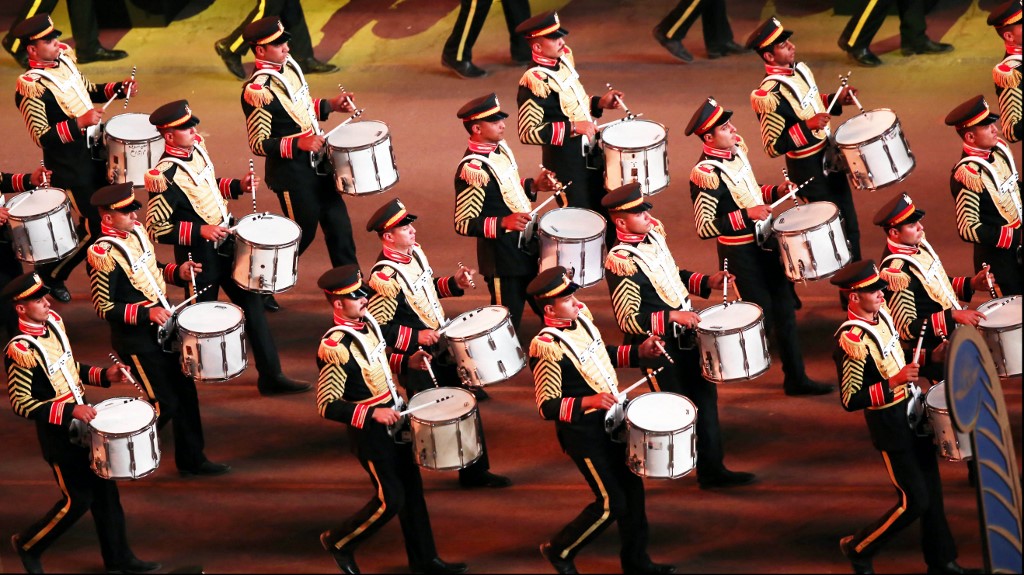 “This grandiose spectacle is further proof of the greatness… of a unique civilization that extends into the depths of history,” said President Abdel Fattah al-Sisi just ahead of proceedings.

Seqenenre Tao II, “the Brave”, who reigned over southern Egypt some 1,600 years before Christ, was on the first chariot, while Ramses IX, who reigned in the 12th century BC, brought up the rear.

Another great warrior, Ramses II, who ruled for 67 years, and Queen Hatshepsut, the most powerful female pharaoh, were also on the short voyage.

Emblazoned with the name of their allocated sovereign, the gold and black colored carriages were fitted with shock absorbers for the trip, to ensure none of the precious cargos were accidentally disturbed by uneven surfaces. 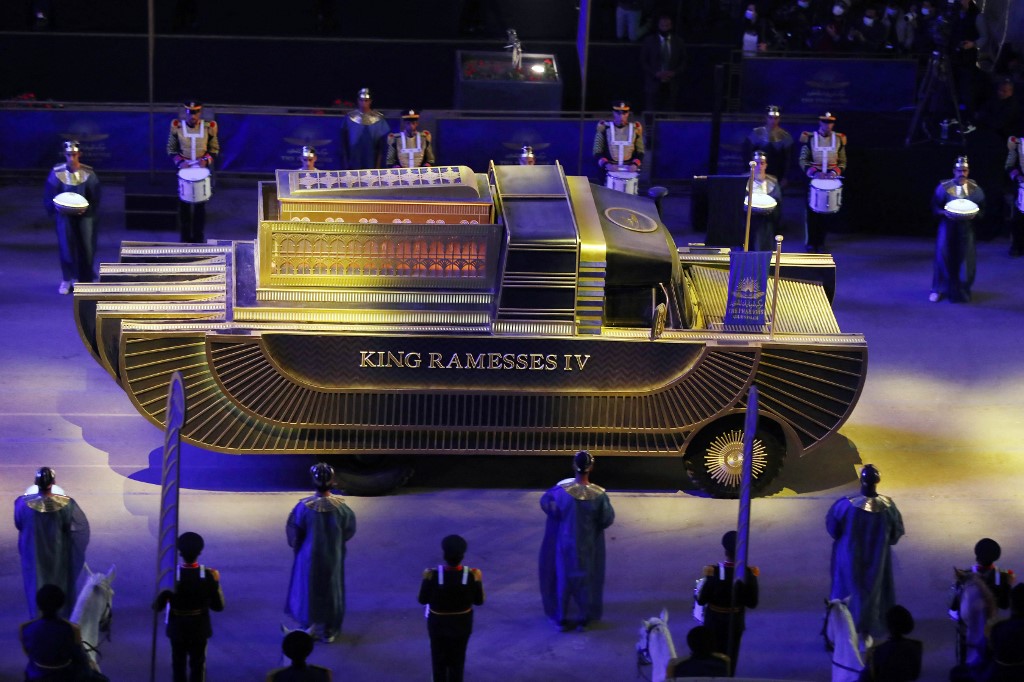 Discovered near Luxor from 1881 onwards, fascinating new details of the pharaohs’ lives – and deaths – are still emerging.

A high-tech study of Seqenenre Tao II, involving CT scans and 3D images of his hands and long-studied skull fractures, indicate he was likely killed in an execution ceremony, after being captured in battle.

For their procession through Cairo’s streets, the mummies were placed in special containers filled with nitrogen, under conditions similar to their regular display cases. 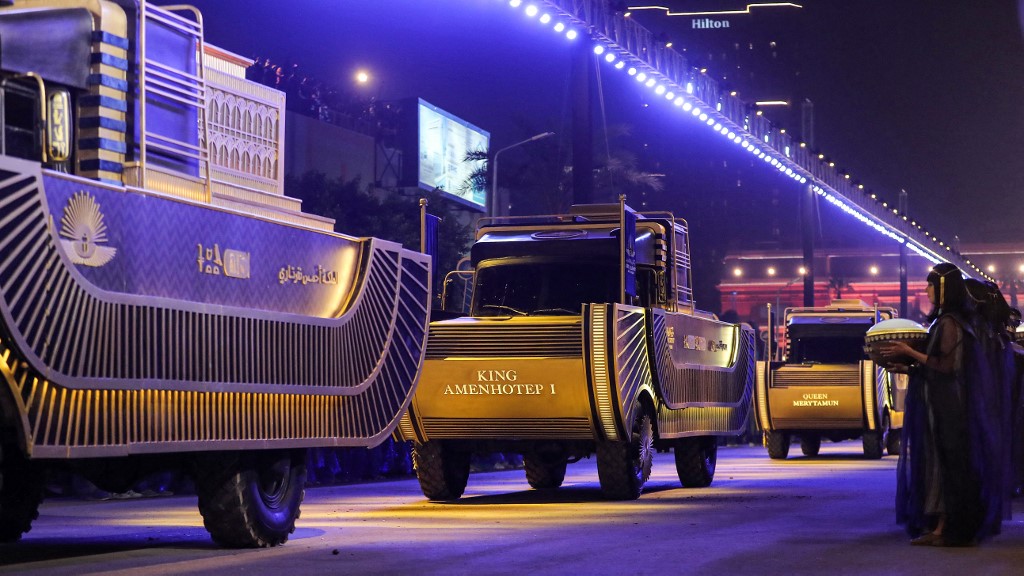 The new resting place, the National Museum of Egyptian Civilisation in the Fustat district of Old Cairo, consists of sleek, low-rise buildings topped with a pyramid amid expansive grounds.

The mummies will undergo 15 days of laboratory restoration before they are showcased individually in their new home, in an environment redolent of underground tombs.

They will be accompanied by a brief biography.

In their new home, they will occupy “slightly upgraded cases”, said Salima Ikram, professor of Egyptology at the American University in Cairo.

Temperature and humidity control will also be enhanced.

The “museum has what it takes to preserve (mummies), the best laboratories… it is one of the best museums we have,” Waleed el-Batoutti, adviser to the tourism and antiquities ministry, told state television. 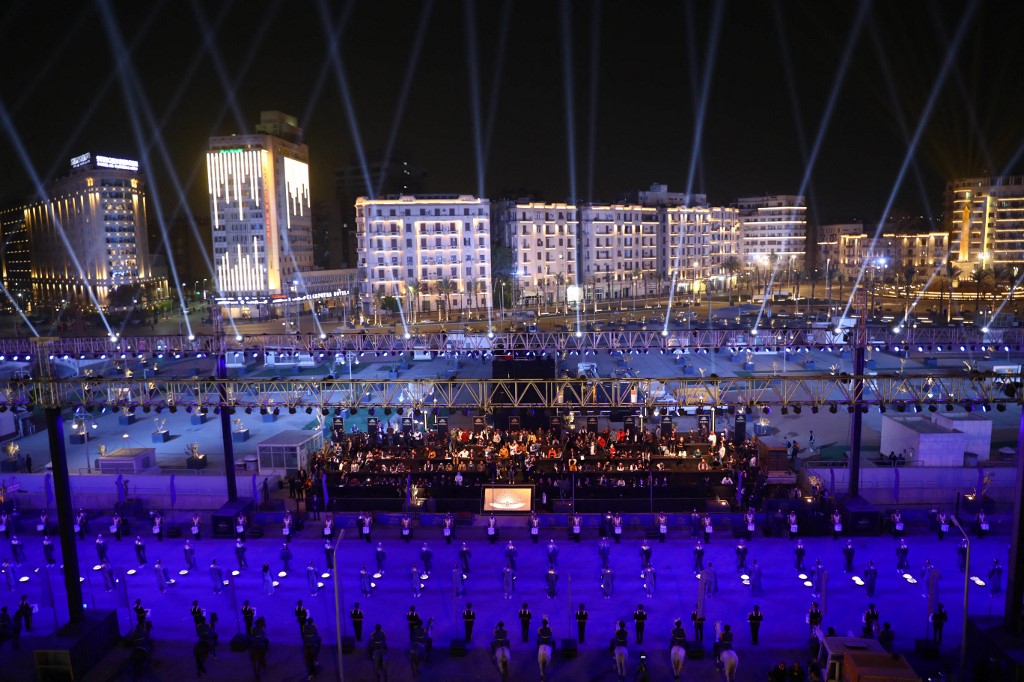 ‘Curse of the Pharaoh’

The National Museum of Egyptian Civilisation opened its doors to limited exhibits from 2017 and will open fully on Sunday, before the mummies go on display to the general public two weeks later.

In the coming months, the country is due to inaugurate another new showcase, the Grand Egyptian Museum, near the Giza pyramids.

It too will house pharaonic collections, including the celebrated treasure of Tutankhamun. 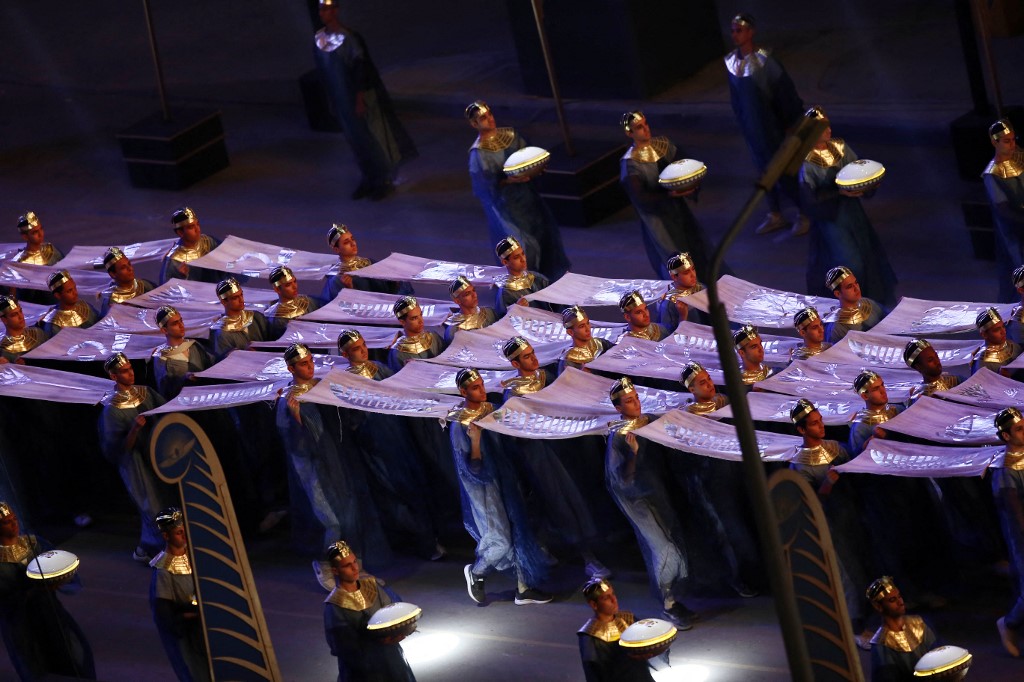 Discovered in 1922, the tomb of the young ruler, who took the throne briefly in the 14th century BC, contained treasures including gold and ivory.

A so-called “curse of the pharaoh” emerged in the wake of Tutankhamun’s unearthing in 1922-23.

A key funder of the dig, Lord Carnarvon, died of blood poisoning months after the tomb was opened, while an early visitor likewise died abruptly in 1923.

With the parade coming only days after several disasters struck Egypt, some inevitably speculated on social media about a new curse provoked by the latest move.

The past days have seen a deadly rail collision and a building collapse in Cairo, while global headlines were dominated by the struggle to refloat the giant container ship MV Ever Given which blocked the Suez Canal for almost a week.

The mummies’ re-housing “marks the end of much work to improve their conservation and exhibition,” said UNESCO Director-General Audrey Azoulay, who was in Cairo for the parade.

“This raises emotions that go much further than the mere relocation of a collection – we will see the history of Egyptian civilization unfold before our eyes.” 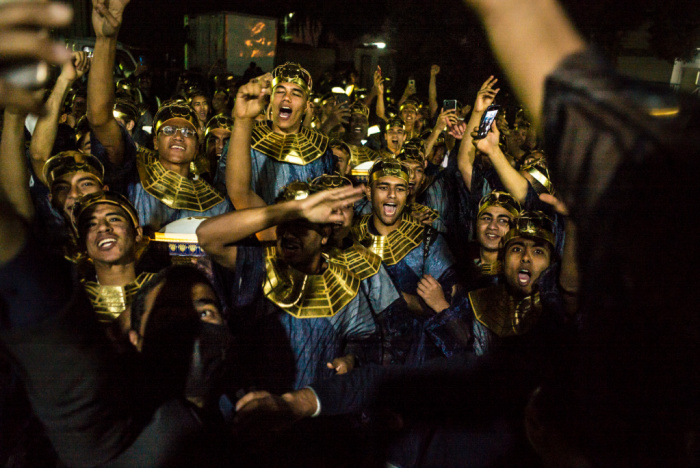 Who are the pharaohs who moved home in Cairo?

Here is a list of the pharaohs being rehoused at the National Museum of Egyptian Civilisation and a description of each.

1 – Seqenenre Tao II, known as “the Brave”, he reigned over southern Egypt some 1,600 years before Christ and led a war against the Hyksos, a Semitic people who had invaded the country.

2 – Queen Ahmose-Nefertari, his powerful and influential daughter, she was married to her brother Ahmose I who was the first monarch of the 18th Dynasty.

3 – Amenhotep I, second pharaoh of the 18th Dynasty, he was a child when he became king and ruled with the help of his mother, Queen Ahmose-Nefertari.

4 – Ahmose-Meritamun, Ahmose-Nefertari’s daughter, she was both the older sister and wife of Amenhotep I.

5 – Thutmose I, the third pharaoh of the 18th Dynasty, he ascended the throne after Amenhotep I died without an heir and helped expand Egyptian rule in the south.

7 - Queen Hatshepsut, known as the “foremost of noble ladies”, she declared herself pharaoh although in ancient Egypt women could not accede to that role. But she rose to become a powerful monarch under whose rule numerous projects were built and trade with other countries flourished.

8 – King Thutmose III was remembered as one of the great warrior kings of the New Kingdom, whose battle at Megiddo is considered a model of military strategy.

9 – King Amenhotep II, his son, was known as an excellent charioteer and all-round athlete as well as skilled with bow and arrow.

He secured Egypt’s borders and fought military campaigns that secured immense wealth and power, and was also known for expanding the Karnak temple complex near Luxor.

11 – Amenhotep III ruled for 37 or 38 years. His reign was known for its opulence and the grandeur of its monuments, including the Colossi of Memnon – two massive stone statues near Luxor that represent him and his wife.

13 – Seti I, son of Ramses I, ruled for at least 21 years during which he led several military campaigns to reimpose Egypt’s authority outside its borders.

His activities and victories were recorded in the temple of Amun at Karnak. His tomb in the Valley of the Kings is one of the best preserved royal sepulchres with vivid colours.

14 – Ramses II ruled for 67 years during which he was known as a great warrior and prolific builder who ordered the construction of temples across Egypt, including the famous Abu Simbel and the Ramessseum, his mortuary temple.

17 – King Siptah came to the throne during the 19th Dynasty as a child and his stepmother Taworset, wife of Seti II, acted as regent.

18 – Ramses III, king of the 20th Dynasty, was known as the last of the great warrior pharaohs of the New Kingdom.

Several papyri recount a so-called “harem conspiracy” involving high officials by his wife, minor queen Tiye, plotting to kill him to put her son Pentawer on the throne.

CT scans of his mummified body have shown that the king’s throat had been cut from behind.

19 – Ramses IV succeeded his father Ramses III but only ruled for six or seven years.

20 – Ramses V ruled for only about four years and died without an heir to the throne.

21 – Ramses VI, one of the sons of Ramses III, ruled for eight years.

Bacteria Can Use Plastic Waste as a Food Source, Which Isn’t as Good as It Sounds
An Expert Explains Why The Radioactive Water Stored at Fukushima Should Be Released
Mysterious ‘Zone of Uncertainty’ Inside The Brain Reveals a Surprise
This Species of Carnivorous Plant Evolved Into a Toilet And Is Now Winning at Life
Mysterious White Clouds Keep Popping Up Near The Bahamas, And No One Knows Why