Human sacrifice has been around for centuries – the Maya, Aztecs, and ancient Egyptians killed prisoners of war, volunteers, and slaves over the course of their histories. But child sacrifice, especially mass killings, are incredibly rare.

Previously, evidence of the largest youth sacrifice ever – 42 children – was discovered at Templo Mayor in Tenochtitlán, the ancient Aztec capital, according to National Geographic.

The Chimú people blew that record out of the water.

Ruins of Chan Chan, the capital of the Chimú empire, sit nearby the modern-day town of Huanchaco. In 2011, a local pizza shop owner told Gabriel Prieto, a professor of archaeology from the National University of Trujillo, to check out a nearby vacant lot full of human bones.

Kristin Romey, archaeology editor for National Geographic and author of the magazine’s exclusive article on the Chimú findings, told Business Insider that Prieto assumed the shop owner had found a forgotten cemetery.

But once Prieto started digging, he realised the bodies were all children, and all 500 years old. Llamas were unearthed too.

Then it came to light that they had all been systematically killed.

Since then, Huanchaquito-Las Llamas, or Las Llamas for short, has been a bustle of activity for archaeologists. “As the excavation seasons progressed, the sheer number of victims was just staggering – no one had ever seen anything like it before,” Romey said.

More burials were uncovered on a nearby site in the summer of 2018. The second site, named Pampa la Cruz, yielded more children and llamas to add to the total. The running tally is 269 children, 466 llamas, and 3 adults. It’s the largest mass child sacrifice to date in the archaeological record.

In an archaeological saga that began in 2011 and will likely continue in the years to come, experts have tried to understand the what prompted this mass child sacrifice.

Take a look at some photos in the February 2019 issue of National Geographic from the excavation sites, which could help archaeologists shed light on what happened that fateful day some 550 years ago.

Children and baby llamas were sacrificed and buried together.

Prieto, along with John Verano of Tulane University led the excavation of both sites. Together, their team confirmed that some 550 years ago, during the twilight of the Chimú empire, this ancient people ritually killed their children.

Many of the children – all between ages 5 and 14 – had faces smeared with a red pigment. Their chests were cut open, ribs dislocated, and their hearts were likely removed. The sacrificial llamas that accompanied them met the same grisly fate.

Child sacrifice in the archaeological record is rare because it doesn’t make a lot of economic sense, Romey said.

“For most of human history, making it past the age or five or so was a big thing. It took a lot of effort and luck. So why would a society wipe out a part of their population that they had already spent so many resources on to just to survive past birth, only to get rid of them before they were old enough to work, fight, or reproduce?” 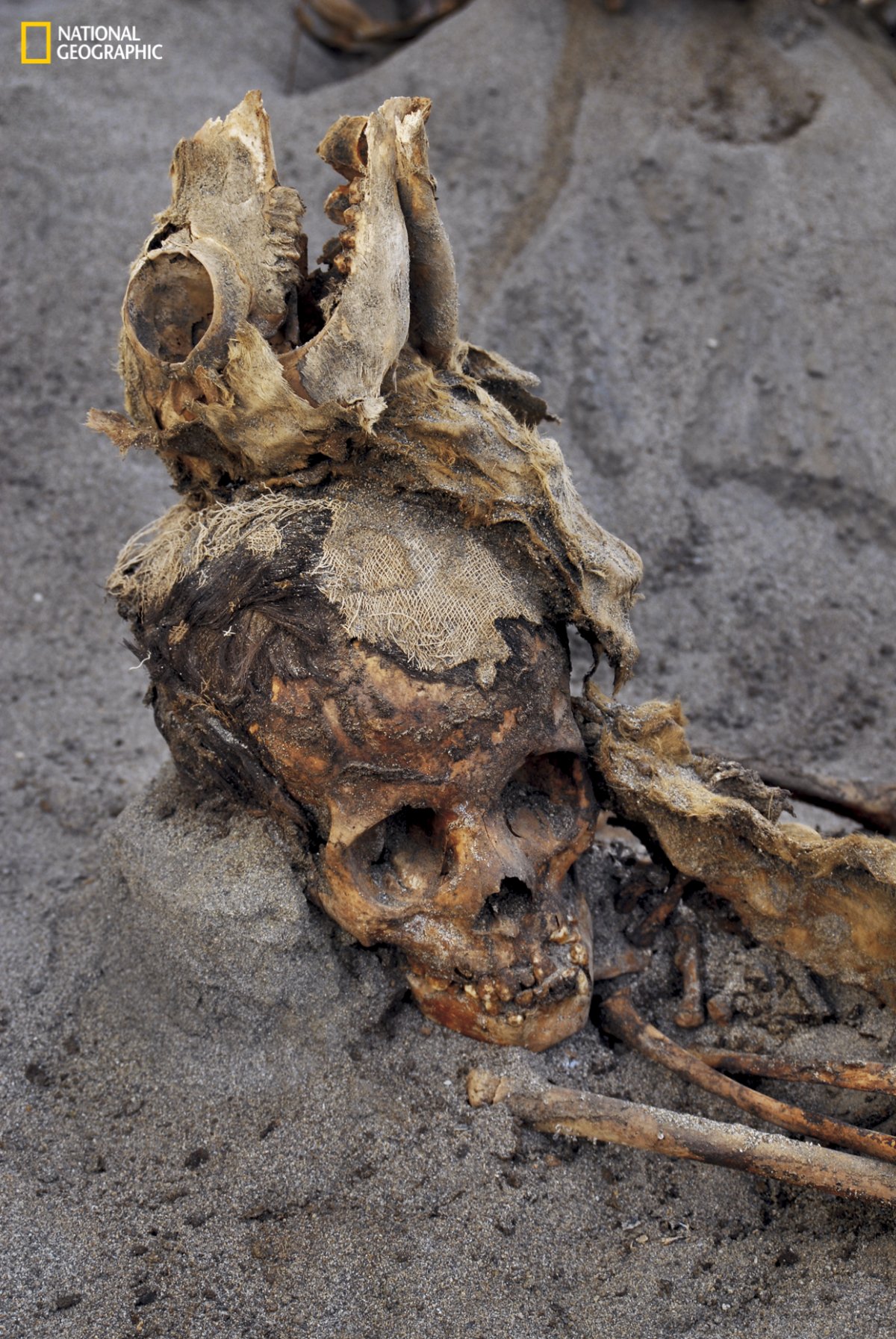 Sacrificing young llamas was similarly costly, as the animals provided the Chimú with food, transportation, and wool.

“Why cull a herd so young?” Romey wondered.

The llamas were all 18 months old, buried facing the Andes to the east. Only brown or light brown llamas were killed. Black and white llamas were spared, it seems.

Killing a future generation of llamas was also a major sacrifice – these animals were sources of food, wool, and transportation.

“In this sense, some think that llamas would have been involved since they were such a critical source of transport, and could aid in movement between our world and the beyond,” she said.

Arguably, the cost of sacrificing a child is far greater than sacrificing an adult. But there may have been spiritual reasons for the choice.

“There are arguments that the children were considered liminal – they weren’t full-fledged people yet and as such could communicate better with the spiritual world,” Romey said.

“And of course, there’s the emotional argument that it is much more painful and valuable to sacrifice your own flesh and blood rather than an elderly or sick member of the community or a foreign captive.”

Each child was killed with a slash to the sternum. Finding the knife that made the cuts was a ‘total Indiana Jones moment’ for the archaeologists.

The sacrificed children met their deaths at the end of a cut across the sternum. A lack of “false start” cuts suggest that they were made by trained hands, according to National Geographic.

“I was literally standing next to Prieto when he unearthed the sacrificial knife,” Romey recalled.

At first, she and the archaeologist weren’t sure what the object was, given the knife’s odd shape. “Then he shook it and it made a rattling noise. We just looked at each other in disbelief,” she said. “Later on we recalled that it felt like a total Indiana Jones moment.” 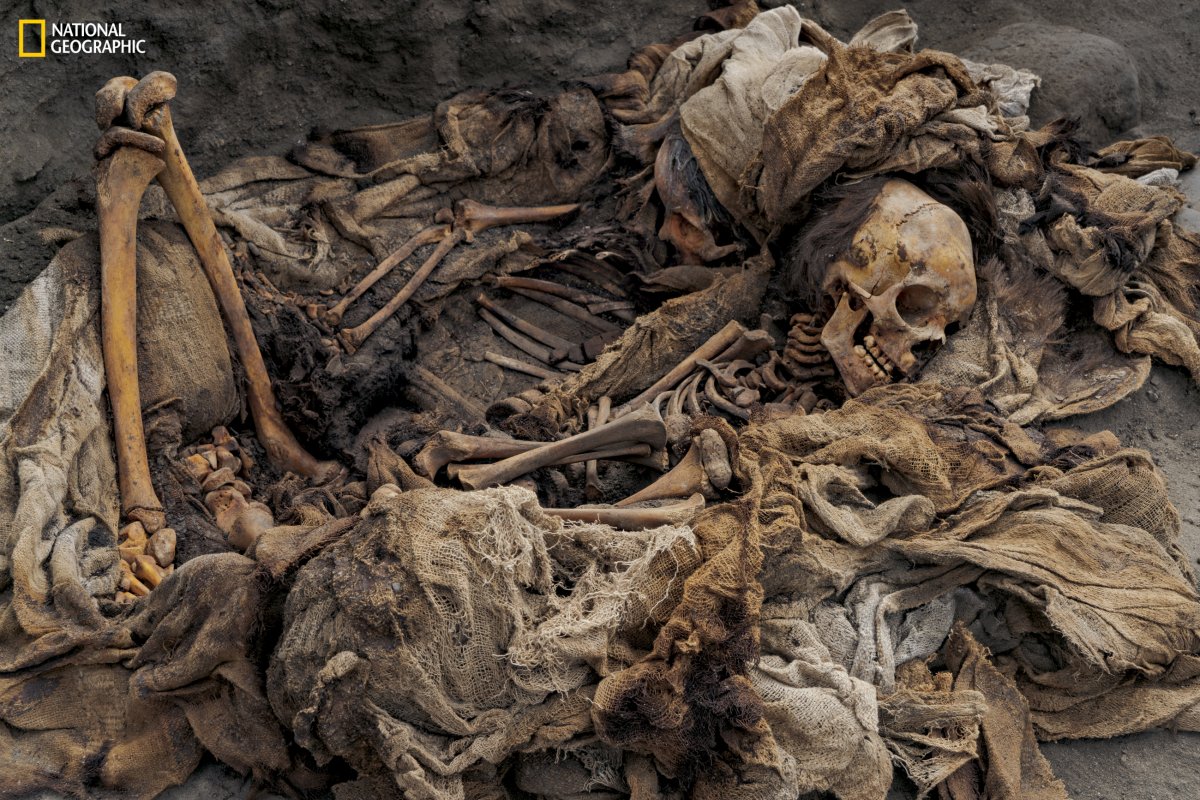 The remains of two children rest beside each other at the Pampa la Cruz mass burial site. (Robert Clark/National Geographic)

Three adults – two women and one man – were also found buried nearby the Las Llamas site, likely felled by blunt-force trauma to the head.

Archaeologists are confident that the three adults were likely involved in the ceremony somehow.

They were “disposed of casually without any apparent ritual, and were probably dispatched after they did their part in the ceremony,” Romey said.

“The one adult male that was found was unusually big for the time, and the researchers suspect that he might possibly have been the executioner.”

Footprints of sandaled adults, barefoot children, and young llamas paint a picture of the mass killing event in a dried mud layer. 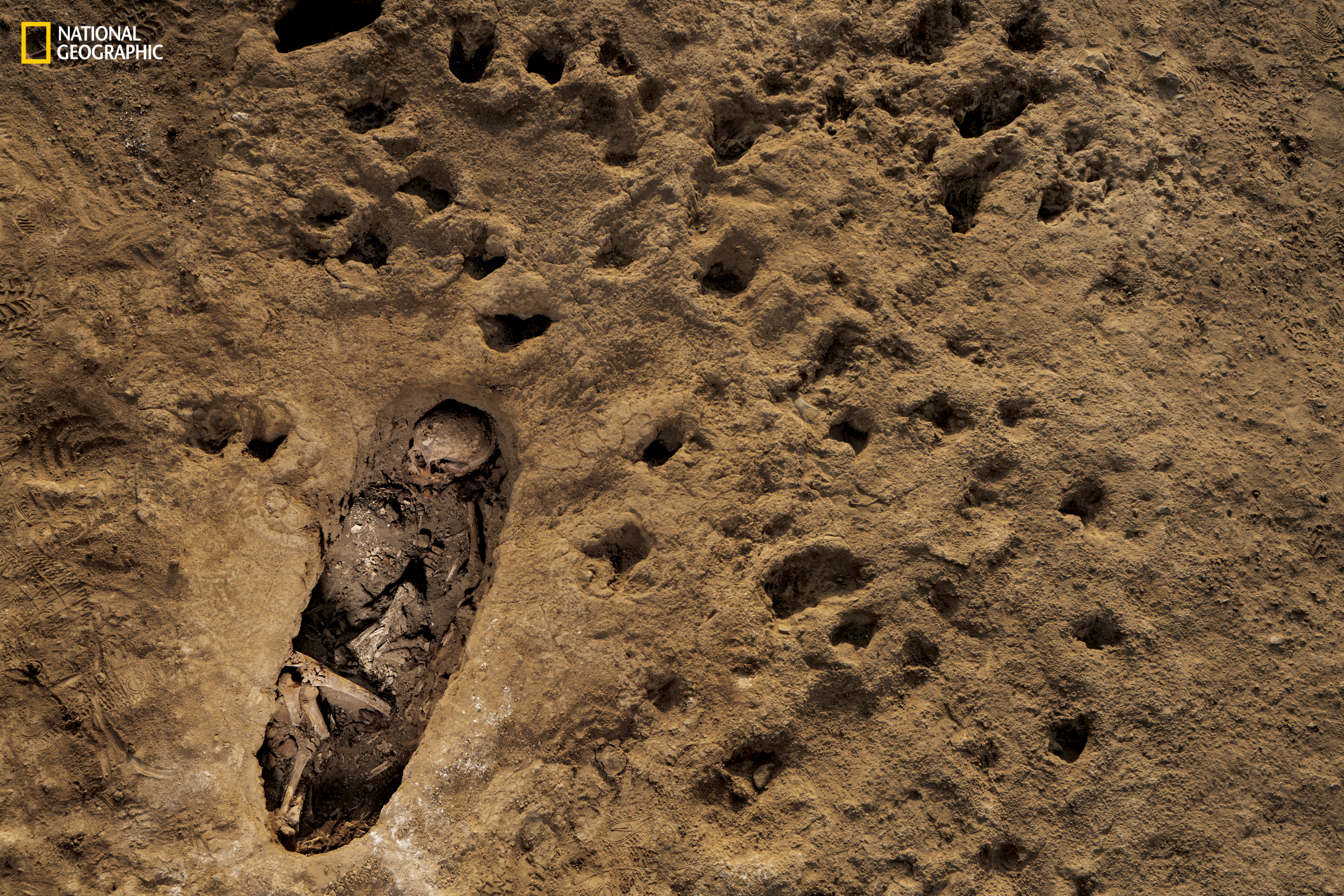 The hoof prints of young llamas are preserved in a deep layer of mud around the grave of a sacrificed child at Huanchaquito. (Robert Clark/National Geographic)

Analysis of the prints suggest a ritual procession, according to National Geographic. The children and llamas were led to the center of the Las Llamas site alive, where they were then sacrificed and promptly buried.

Deep skid marks from hoof prints seems to suggest the llamas were reluctant to meet their grisly ends.

These children may have been offered up to placate the gods after a season of heavy flooding.

One of the prevailing theories for the “why” behind the Chimú’s sacrifice is that they were an attempt to appease the purportedly angry weather gods.

Right around the time of the sacrifices, between 1400 and 14500, there was an El Niño event, which could’ve contributed severe rainfall and flooding in the area.

That flooding may have wreaked havoc on agriculture, causing the Chimú to starve and take drastic action.

Romey doesn’t think El Niño was the only culprit behind the Chimú’s drastic sacrifice.

“Most societal collapses come from being hit on all sides by a variety of forces,” Romey said. “But it definitely played a big role, as El Nino events really mess with coastal Peru to this day.”

She pointed out that the Inca were also moving in on the Chimú at the time experts think the sacrifice took place; the takeover was complete about a decade later.

“So this was a time of high anxiety, when a once-powerful empire probably felt that things were spinning out of control environmentally, financially, and politically.”

These children all appeared to be well cared for. They came from all over the empire.

It’s not clear how the children were selected for this ritual.

But they were buried without any customary grave goods or adornments, and in odd positions – prone on their backs, or curled up – instead of in the typical sitting position.

The second site provided new information about the Chimú’s belief systems and trade networks, thanks to the newly uncovered burials with feathered robes, headdresses, and jewellery. 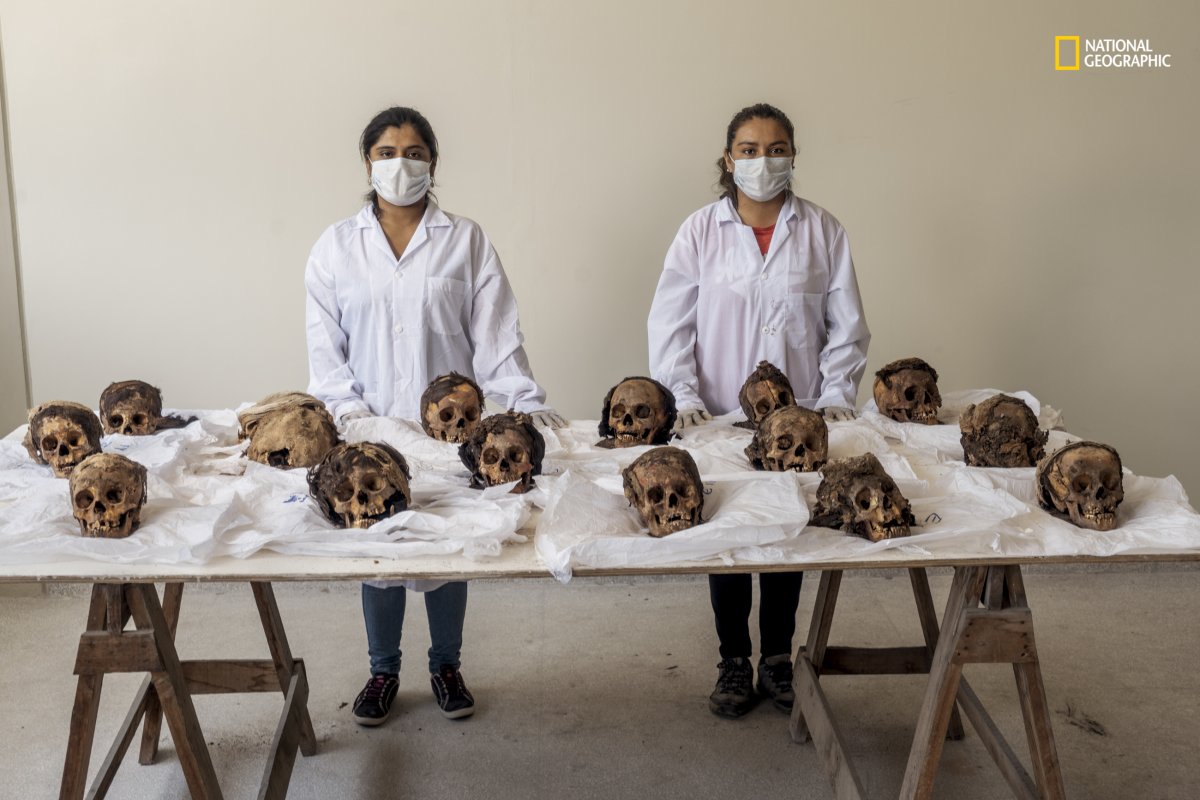 Huanchaco boasts an extensive archaeological legacy that will only grow in time.

All told, there were 137 children and 206 llamas uncovered at Las Llamas, and 132 children and 260 llamas found at Pampa la Cruz.

Romey said archaeologists are continuing to dig at Pampa la Cruz, and she wouldn’t be surprised if they found more graves.

“This little surfing town, Huanchaco, is literally just beyond the walls of what was once one of the biggest and most powerful cities in the Americas,” she said.

“Imagine if 500 years from now New York City was a ruin being dug by archaeologists. This would be like digging up Williamsburg and Long Island City.”

National Geographic broke the story of the mass sacrifice earlier in 2018. With an exclusive in their February 2019 issue, they offer a deeper exploration into the forces that drove the Chimu to their violent ends.

Why were nine children buried with grave goods and head regalia and the rest not? What societal, or supernatural, forces selected these children in particular for a ritual sacrifice?

Each discovery in Huanchaco sheds a little more light on the 550-year-old mystery.

But all this is all about trying to get into the heads of a society that lived centuries ago and left no written records, Romey said.

So we’ll never really know for sure.

Earth’s Inner Core May Right Now Be in The Process of Changing Direction
Dozens in 7,000 Year Old Mass Grave Were Carefully Decapitated After Death
A Rare Green Comet Can Be Seen in The Sky, And It May Be Our Last Chance
Dogs Can Be Aggressive For Lots of Reasons, And One of Them Is You
Scientists Have Built a Macroscopic Tractor Beam Using Laser Light