Humanity’s artistic heritage just got a new historical milestone. In a cave wall deep in the forests of the isle of Borneo, archaeologists have just confirmed that a depiction of some sort of cow is the world’s oldest known figurative piece of art.

It dates back to between 40,000 and 52,000 years ago, during the Upper Palaeolithic and the last ice age – at least 5,000 years older than the previous record-holder for figurative cave paintings, from the nearby Indonesian island of Sulawesi.

It’s been known since the 1990s that the caves of East Kalimantan on Borneo contain a large number of ancient paintings. However, it was thought that they were relatively young – only about 10,000 years old.

Then archaeologist and geochemist Maxime Aubert of Griffith University in Australia – who has previously determined the age of nearby Sulawesi cave art – turned to radiometric dating to find out for sure.

He tested not just the cattle paintings – likely a species of wild cattle called bantengs – but also the myriad hand silhouettes scattered all over the cave. One of the three bantengs in this panel is at least 40,000 years old. (Luc-Henry Fage)

“The oldest cave art image we dated is a large painting of an unidentified animal, probably a species of wild cattle still found in the jungles of Borneo – this has a minimum age of around 40,000 years and is now the earliest known figurative artwork,” he explained in a statement.

That’s not just cave paintings. It’s all figurative artworks, including the previous title-holder – the Löwenmensch figurine, a sculpture from Germany with the head of a lion and the body of a human. It’s between 35,000 and 40,000 years old.

So how do you date a rock painting? Well, if you get lucky – and Aubert and his team did – some rock will have grown over the art in the intervening millennia. A tiny section of the let’s-call-it-a-banteng had been covered by a layer of calcite.

This calcite can then be subjected to a technique called uranium-thorium dating.

“Rainwater seeps through the limestone and dissolvesa  small amount of uranium. Uranium is radioactive and with time it decays to make another element, thorium. The rate of decay is precisely known,” Aubert told ScienceAlert.

“They key is that uranium is soluble in water but thorium is not. So when a calcite coating forms form rainwater on top of a painting, it initially contains uranium but no thorium. If we take a sample [from] thousands of years later and measure the ratio of uranium versus thorium, we can calculate the age of the coating.”

Of the types of art in the cave, hand stencils made with a similar red pigment were dated across a long timespan. One had a maximum age of 51,800 years, while two were a minimum of 37,200 years old.

Hand stencils made with a darker, mulberry-coloured pigment were considerably younger, coming in at around 20,000 to 21,000 years old. It was perhaps around this time that a new type of art made an appearance in the cave – human stick figures, boats and geometric shapes, painted in black pigment.

This, the archaeologists said, indicates a cultural shift around 20,000 years ago, with the focus of art moving from the natural world to one dominated by the human experience. We don’t know who painted the art, or why – but the changes in style and content is a tantalising clue. 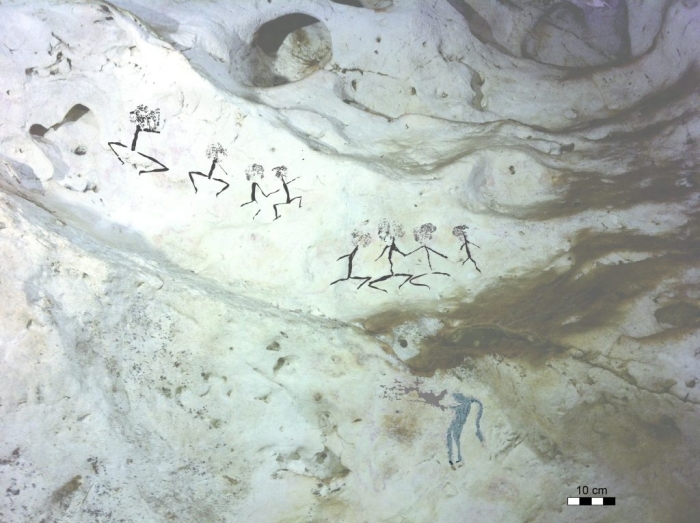 “This possibly reflects the arrival of another wave of humans,” Aubert said, “or a natural evolution in art development coinciding with the onset of the Large Glacial Maximum and a potential increase in population size in that part of Borneo owning to more favourable conditions for humans.”

We know, he said, that humans arrived in the region roughly 70,000 to 60,000 years ago – yet, curiously, there seems to be no cave art from those early millennia.

“Maybe that’s because it hasn’t been found or dated, maybe they were different waves of human migration, maybe the dating for the earliest arrival or humans in Southeast Asia and Australia is wrong, or maybe it has to do with population density – population could have significantly increased,” he noted.

It’s not just local history that’s affected. Combined with the Sulawesi art, the East Kalimantan art represents a shift in how we need to think about global culture. Previously, Europe had been thought of as the birth place and centre of human creativity.

But, just as the Europeans were daubing cave walls with their experiences, so too were the people of Borneo and Sulawesi, half a world away. And the age of the art, from Borneo to Sulawesi, suggests a migration pattern.

“Cave art could have potentially been exported from Borneo to Sulawesi and potentially further all the way to Papua and Australia,” Aubert said.

The team’s research has been published in the journal Nature.

Ancient Goo Spills The Secrets of How The Egyptians Mummified Their Dead
The First Stars May Have Been Heavier Than 100,000 Suns
Scientists Reveal The Most Precise Map of All The Matter in The Universe
A Mysterious Whirlpool Appeared Over Hawaii, And It Could Be Because of SpaceX
AI Predicts We’ll Breach Our Climate Goal in Just 10 Years