As beautiful and unspoilt as the Antarctic wilderness is, it can also be very lonely (unless you’re a penguin). After news of a researcher at the Bellingshausen Station on King George Island allegedly stabbing and injuring a colleague, we wonder if cabin fever got the better of the team working there.

The injured man was flown to a hospital in Chile after allegedly being stabbed in the chest, Sky News reports. Russian news agencies are putting the incident down to “tensions in a confined space” – but for now that’s about all we know.

Reports indicate that the man allegedly responsible was flown to St Petersburg and arrested for attempted murder, after the incident on 9 October. He apparently surrendered without putting up any resistance. 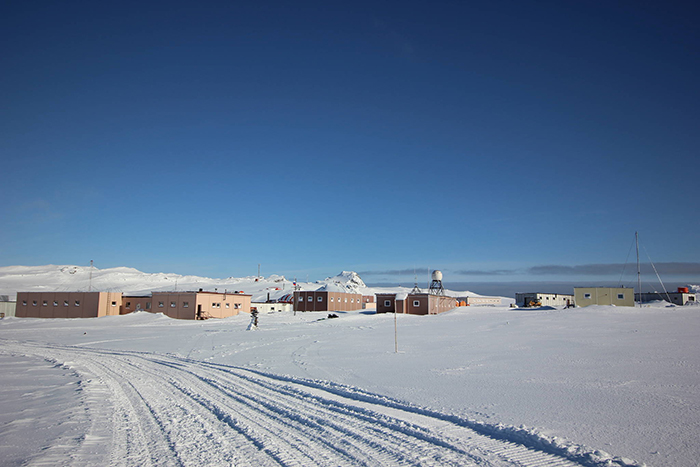 According to one source, the two men had been part of the team of researchers at Bellingshausen for six months.

The station was founded by the Soviet Union in 1968, taking its name from 19th-century Russian explorer Fabian Gottlieb von Bellingshausen. He’s credited as being one of the first two people to see Antarctica, in 1820.

He went on to be the second person to circumnavigate the continent, after James Cook.

But not long after human beings first stepped foot on Antarctica, we’ve been having problems coping with the isolation – and of course the extreme cold.

Go back to the Belgian Antarctic Expedition of 1897, for instance. Having been trapped by ice, the crew were forced to spend winter with their ship locked in the frozen continent, leading to numerous physical and mental health problems.

One man reportedly walked off across the ice, announcing he was returning to Belgium. “Time weighs heavily upon us as the darkness slowly advances,” wrote ship doctor Frederick Cook.

Our coping mechanisms haven’t improved all that much in the decades since, it would seem.

The oldest continuously occupied station in Antarctica is the Orcadas Base weather station on Laurie Island, established in 1903.

We often think of the frozen wilderness as uninhabited, but in fact there are now more than 90 active, permanent research stations on the continent. They’re run by dozens of countries, and staff some 4,000 people in the summer months.

Thankfully, incidents like the one at Bellingshausen Station are few and far between. The mysterious case of Rodney Marks – possibly poisoned at Amundsen-Scott South Pole Station in 2000 – remains Antarctica’s only suspected murder, and remains unsolved.

There was also a fight involving two cooks and a hammer in 1996 – as per the Antarctic Treaty, the misdemeanour was investigated by the home country of those involved. In that case, the FBI were called in, but no permanent injuries were recorded.

Let’s hope “tensions in a confined space” continue to be kept down to a minimum, but researchers living on Antarctica would do well to stay vigilant.

In terms of the science behind cabin fever, very little research has looked at it specifically – not least because there isn’t an agreed-upon definition, even if most of us know the sort of cooped up, isolated conditions we’re talking about. It also overlaps with a lot of other symptoms and moods.

Based on a 1983 study, cabin fever meant “feelings of dissatisfaction at home, restlessness, boredom, irritability, and needing to break routine” to many of the 35 people interviewed for the research.

If scientists want to look more closely at cabin fever and how it can take hold, we’ve got a suggestion about where they should take a field trip – and they’ll need to wrap up warm.

Could ‘The Last of Us’ Ever Happen? The Real Risks of a Fungus Pandemic
The Mysterious Asymmetry of Jupiter’s Asteroids May Finally Be Explained
Bar Graphs Induce a Hidden Bias in Interpretation, Experiment Shows
Are Your Cats Playing or Fighting? Researchers Think They Can Tell The Difference
Physicists Used Sound Waves to Give a Tiny Sun Its Own Kind of Gravity