Much like Egypt’s pharaohs, the emperors of China’s Western Han dynasty had a thing for being buried inside pyramids – although less recognisable than the iconic ones we know from places like Giza.

Scattered along the outskirts of Xi’an along the banks of China’s Wei River, the sides of these burial mounds align with the cardinal points. At least, some do. Others are twisted to face a different direction, and Italian researcher Giulio Magli thinks he knows why.

Magli is what you might call an archaeoastronomer – a researcher who looks at the relationship between ancient architecture and celestial arrangements.

He argues the explanation behind two distinct patterns of orientation among the tombs of the Western Han emperors might have to do with how some family traditions chose a different way to show how powerful they were. 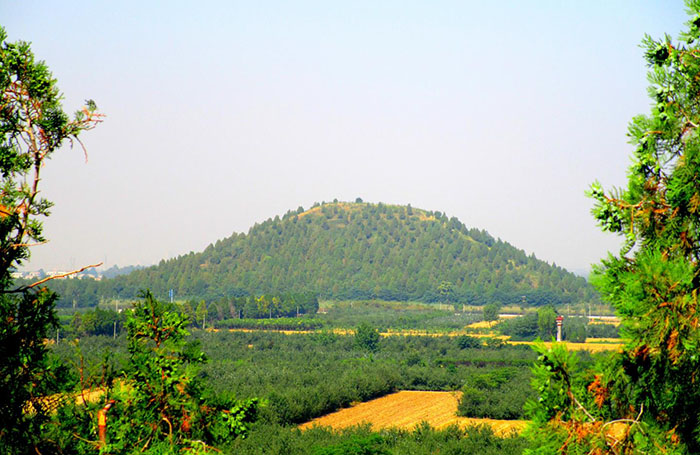 To some rulers, the cardinal points of north, south, east, and west were all important. Lining up your tomb with the globe’s axis was a sign that you were still number one.

But a number of the tombs have a slight rotation, off from by as much as nearly 14 degrees.

Either a mistake was made, or some ancient Chinese emperors allied themselves with a different set of powers.

If you’re not familiar with the western Han dynasty, you might still know of at least one of the emperors – Qin Shi Huang. His reign unified warring states in 221 BCE, possibly giving us the name China, so you don’t really get more famous than having a massive country named after you.

If that doesn’t grab you, Qin is also famous for ordering the construction of an army of terracotta warriors to watch over his grave.

The pre-modern world is full of pyramid-like structures. Not because they were swapping notes or watching the ancient equivalent of Grand Designs, but because it’s actually the simplest way to build big structures that won’t fall down easily.

To make them meaningful and show how rulers were allied with forces of nature, architects could either fit them into the aesthetics of the landscape, or line them up with something even bigger still – the heavens.

Many of Egypt’s pyramids are aligned similarly, for example, with barely a slight deviation from the cardinal points. Exactly how they carried this out is still debated, with a recent study suggesting they used the stars at the equinoxes.

Qin was no different. He also had his elongated pyramid line up in a nearly perfect north-south direction. It’s almost certain that his architects used the positioning of the Sun and constellations to find the direction of the geometric South Pole.

While Qin did a great job bringing together the states, his peace didn’t last long. A few years later the squabbling states were unified once again, this time under Liu Bang, who became known as Emperor Gaozu of Han.

When Gaozu died, he also went for eternity under a pyramid. Only this one pointed a few degrees off south, closer to the 167 degree mark.

Just to mix it up, the next emperor didn’t even bother with a pyramid, going for a boring old mound instead. But emperor number four went back to squared sides, again matching the cardinal points.

Numbers five and six once again twisted their tombs, nearly lining up with Gaozu. But not quite.

On this went, showing a pattern dividing the dynasty into two distinct classes of pyramid, one within a single degree of north, the other off by between 8 and 14 degrees.

What gives? A wobbly compass perhaps?

Magli rules this out using paleomagnetic data, and doesn’t think it was a mistake of any other kind. He also rules out distinct forms of Chinese geomancy, or feng shui, based on a lack of supporting evidence.

Instead, he thinks the deviation comes down to something called precession. The axis on which Earth rotates leans in one direction as it orbits the Sun, pointing towards two spots in the sky called the celestial poles.

This lean wobbles slightly over time, slowly drawing a circle that takes about 25,700 years to complete. That means what is celestial north today – lining up with the star Polaris – wasn’t the same around two millennia ago.

But if we trace the path of Polaris back over history, its maximum western point would more or less line up with the odd orientation of each tomb around the time of its occupant’s passing, according to Magli.

Polaris was an important star in Chinese tradition, seen as the great emperor of the heavens. So it’s possible some members of the dynasty figured they’d skip the old north-south tradition and show they were allied with this powerful star instead.

It’s a rather speculative idea, but Maglis makes a strong case for the odd pattern of tombs, and his paper sure makes for a compelling new addition to what we know on ancient pyramid alignment.

This research was published in Archaeological Research in Asia.