Around 6,200 years ago, 41 people in what is now Croatia were killed and buried in a mass grave, and members of their own community may have murdered them, according to new analysis of the remains.

Adult men and women were among the dead, but ages in the group ranged from 2 years old to 50 years old, and about half of the skeletons belonged to children.

Many of the killing blows were strikes to the skull that landed from behind, and there were no marks on the arm bones that indicated the victims tried to defend themselves from their attackers, scientists reported in a new study.

Genetic analysis showed that about 70 percent of the deceased were not closely related to other victims, but all shared common ancestry.

Researchers suspect that the massacre may have been prompted by a sudden population boom or shift in climate conditions that depleted resources and led to indiscriminate mass murder.

The grave was discovered in 2007, when a man who lived in a small village in the hills of Potočani, Croatia, was digging a foundation for a garage, and heavy rains exposed a pit holding dozens of skeletons.

Archaeologists with the University of Zagreb happened to be conducting a survey nearby, and they were able to start investigating the mass grave on the day it was discovered, said Mario Novak, lead author of the new study and head of the Laboratory for Evolutionary Anthropology and Bioarchaeology at the Institute for Anthropological Research in Zagreb, Croatia.

The pit is small, measuring about 6.5 feet (2 meters) in diameter and 3 feet (1 m) deep, and at least 41 bodies had been unceremoniously dumped there.

At first, the archaeologists thought that the remains were modern, either from World War II or the Croatian War of Independence in the 1990s, Novak told Live Science. But there were no contemporary objects in the pit – just fragments of pottery that looked to be prehistoric.

And when researchers inspected the victims’ teeth, they found no dental fillings. Radiocarbon dating of bones, soil and pottery fragments confirmed the age of the burial, dating it to around 4200 BCE.

The researchers identified 21 of the victims as children between the ages of 2 years and 17 years old, and 20 as adults between 18 years and 50 years old; 21 of the dead were male and 20 were female. 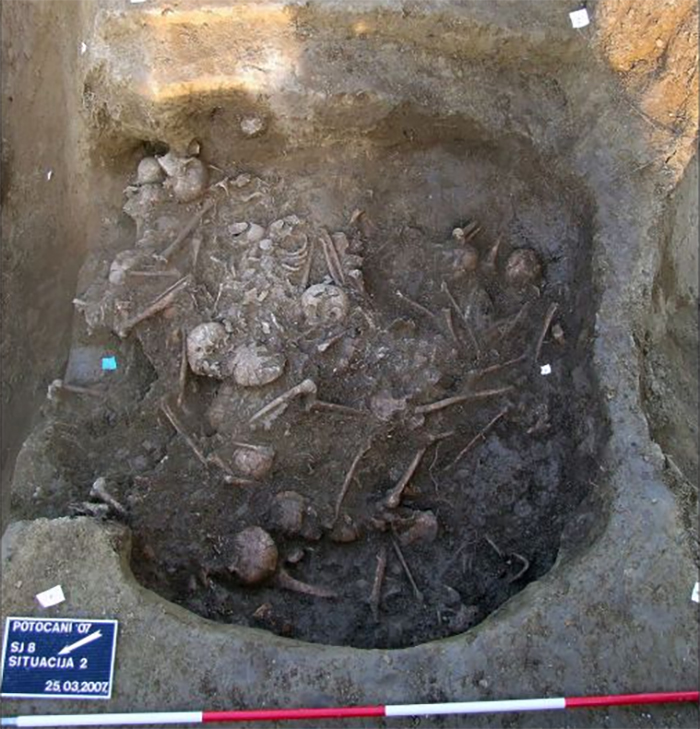 Above: The Potočani mass burial, with the upper layers of the pit showing numerous commingled skeletons.

But how did they end up buried together? For the new study, Novak and his colleagues sampled DNA from remains and analyzed the bones of 38 individuals. When the researchers inspected the bodies, they found that most had at least one traumatic injury at the back of the skull, and some skulls had as many as four punctures.

Mass graves in medieval Europe frequently contained people of all ages and sexes who succumbed to the Black Death, but the victims in the Potočani pit died by violence, not of infectious disease, Novak explained.

“The only plausible scenario was a massacre,” he said.

Distribution of men and women, and of adults and children, was roughly equal, and there were no wounds to their limbs or faces, so they likely weren’t killed in a skirmish during combat.

It is unknown if the victims were restrained or otherwise incapable of defending themselves – “if someone attacks you with a club or a sword, you reflexively raise up your forearm to protect the head,” which would have left at least some remains with cut marks on the arm bones, Novak said. “But we didn’t see any facial injuries, and no defensive injuries whatsoever.” Above: Three penetrating injuries on the right side of the skull of a young adult female from Potočani.

Genetic data showed that only 11 of the victims were close relatives, so the massacre wasn’t targeting a specific family group. Neither did it look like a planned discriminatory killing, in which foes tended to murder older men while taking women captive.

“In this case, it was just random killing, without any concern for sex and age,” Novak said.

A Neolithic death pit that was recently described in Spain also held a jumble of skeletons – male and female, young and old. DNA showed that the victims were recent arrivals to the region, so they may have been slaughtered by locals protecting their territory, Live Science previously reported.

But genetic evidence from the site in Potočani indicated that even though most of the dead weren’t closely related, they shared common ancestry. This means that they weren’t newcomers; rather, they came from a local population that was homogeneous and stable, “so we can exclude that this massacre was associated with the influx of new immigrants,” Novak said.

The most likely explanation is one that archaeologists and climatologists have suggested for other ancient massacre sites in Germany and Austria dating to about 5,000 years ago, in which adults and children were also killed indiscriminately and thrown into shallow mass graves.

In those scenarios, prolonged climate change that caused flooding or droughts – perhaps combined with an unexpected population boom – could have led to squabbles over precious resources.

And in Potočani, one of those struggles turned deadly.

“By studying such ancient massacres, we might try to get a glimpse into the psychology of these people, and maybe try to prevent similar events today,” Novak said.

“We have evidence of ancient massacres going back to 10,000 years ago, at least. Today, we also have modern massacres – the only thing that’s changed is we now have more efficient means and weapons to do such things. But I don’t think human nature or human psychology has changed much.”

The findings were published online March 10 in the journal PLOS One.

Back to the Stone Age: 17 key milestones in Paleolithic life

In Photos: The Life and Death of Ancient ‘Urbanites’