Archaeological work ahead of the construction of a controversial road tunnel beside Stonehenge has led to the discovery of ancient graves, including one with the remains of a baby dating back more than 4,500 years; a strange earth enclosure; and prehistoric pottery, among other buried treasures.

Some of the finds may have been used by people who built the mysterious Neolithic monument, and all of the discoveries show that the region was inhabited by different ancient peoples for thousands of years.

“Collectively, [the finds] allow us to build up an ever-more-detailed picture of what people were doing and how they were living in the area around Stonehenge,” Matt Leivers, a consultant archaeologist for Wessex Archaeology, told Live Science.

Related: In photos: A walk through Stonehenge

Before breaking ground on the $2.4 billion project to move a nearby highway underground, UK authorities have tasked Wessex Archaeology with making a thorough investigation of the land above it.

To do this, archaeologists walked the fields and created trenches and pits to test for archaeological remains and artifacts along the 2-mile-long (3 kilometer) strip where the road tunnel is planned, Leivers said in an email.

The team was guided by surveys from the air and used geophysical survey equipment to look for land disturbed by digging and structures in the distant past.

Although the UK government approved the controversial Stonehenge tunnel in 2020, the project still faces legal challenges; opponents say it will damage one of the world’s most precious ancient landscapes.

The latest finds were made during preliminary studies of the area, before 18 months of full archaeological excavations are expected to begin later this year, Leivers said.

Foremost among the latest finds are several graves, unearthed just to the southwest of the Stonehenge circle, that are thought to be from the Beaker culture, which is named after their practice of burying the dead with bell-shaped pottery drinking vessels.

The Beaker people lived in Western Europe between 4,800 and 3,800 years ago, beginning in the Chalcolithic period when the first copper tools came into use.

In one of the graves, the researchers found a simple pot alongside the remains of a baby, though only the ear bones remain. Another pit nearby contains the remains of a woman who died in her 20s, her body crouched around a relatively ornate pot or beaker.

The research team also found a fragment of a copper awl or needle and a mysterious cylindrical shale object, perhaps part of a staff or club, in her grave.

Both graves are thought to be about 4,500 years old, which would make them about the same age as the smaller “bluestones” around and within the main circle of large sandstone “sarsens” at Stonehenge, Leivers said.

Buried caches of other ancient artifacts, including pottery vessels, flints, and deer antlers that may have been used for digging have also been found along the planned tunnel route. 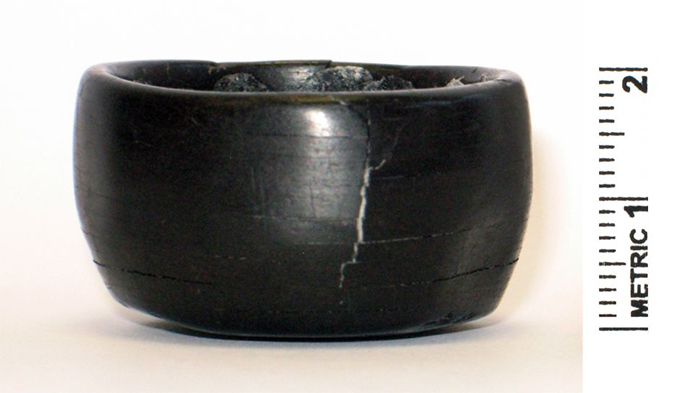 Above: This strange cylindrical object, made of shale, was discovered in one of the ancient graves. It may have been part of a ceremonial staff or club.

“Stonehenge was built over a very long period of time; even individual phases of its construction could have taken years or decades to complete,” he said. “It’s entirely conceivable that the people who left those things behind or who were buried nearby had some role in Stonehenge’s construction.”

The preliminary investigations have also unearthed ditches to the southeast of the monument that could be part of an Iron Age fort known locally as “Vespasian’s Camp” – named after the Roman general, later emperor, who led a military force in the area during the Roman invasion of Britain after A.D. 43. Even so, there’s no evidence the fort had anything to do with him.

The archaeologists also found a pattern of buried ditches south of the graves that appears to form an enclosure. It seems to date from a period in the middle to late Bronze Age, after about 3500 years ago, when there was a settlement nearby, Leivers said.

He added  that the team found large quantities of burned flint in the soil around it, perhaps indicating that some dirty or smelly activities took place there.

Highways England – a government-owned company tasked with operating, maintaining and improving England’s motorways and major roads — contracted Wessex Archaeology to study the site of the proposed Stonehenge tunnel, which is designed to finally rid the famous Neolithic site of road traffic by rebuilding part of a nearby highway underground.

Stonehenge sits on otherwise vacant land, but the road has run only a few hundred feet to the south since the 19th century; cars and trucks on the road can be easily seen and heard from within the stone circle.

Opponents say the project will cause irreparable damage to the ancient landscape and result in the loss of thousands of prehistoric artifacts and archaeological remains. Among the proposed alternatives are bypasses to the south of the Stonehenge site that would remove most of the road traffic from the area.

Leivers said the tunnel that goes past Stonehenge is the least-interesting part of the project archaeologically, because the proposed method of boring the tunnel deep underground will have no impact on artifacts or remains near the surface.

“It’s only at the tunnel portals and along the road to the east and west that the archaeology will be affected,” he said

Instead, the full excavations due to start later this year will let archaeologists study a long transect landscape on both sides of the Neolithic monument.

“These are the parts that people don’t look at as often, away from the stones themselves, so it is a very valuable opportunity to place Stonehenge in its wider landscape context,” he said.

Image gallery: Digging up at tomb at the Swedish Stonehenge

AI Predicts We’ll Breach Our Climate Goal in Just 10 Years
Scientists Discover a Weird New Form of Ice That May Change How We Think About Water
Embers of an Ancient Inferno Pinpoint The Worst Extinction in Earth’s History
Incredible ‘Fairy’ Robot Sails on The Breeze Like a Floating Dandelion
A Hidden Food Web Exists in The Desert, And It Thrives on Death