A cave ancient Romans believed to be a gate to the underworld was so deadly that it killed all animals who entered its proximity, while not harming the human priests who led them.

Millennia later, scientists believe they have figured out why – a concentrated cloud of carbon dioxide that suffocated those who breathed it.

Dating back 2,200 years, the cave was rediscovered by archaeologists from the University of Salento back in 2011.

It was located in a city called Hierapolis in ancient Phrygia, now Turkey, and it was used for animal sacrifices of bulls led through the Plutonium – or Pluto’s Gate, for the Classical god of the underworld – by castrated priests.

As the priests led the bulls into the arena, people could sit on raised seats in an arena and watch as the fumes emanating from the gate brought the animals to their death.

“This space is full of a vapour so misty and dense that one can scarcely see the ground. Any animal that passes inside meets instant death. I threw in sparrows and they immediately breathed their last and fell,” wrote Greek historian Strabo (64 BCE – 24 CE).

It was this phenomenon that alerted the archaeology team to the cave’s location. Birds flying too close to the cave’s entrance suffocated and dropped dead – showing that, thousands of years later, it’s still just as deadly as ever.

The culprit is seismic activity under the ground, according to volcanologist Hardy Pfanz of the University of Duisburg-Essen in Germany, who led research into the cave’s seeping gas back in 2018. A fissure running deep beneath the region emits large amounts of volcanic carbon dioxide. 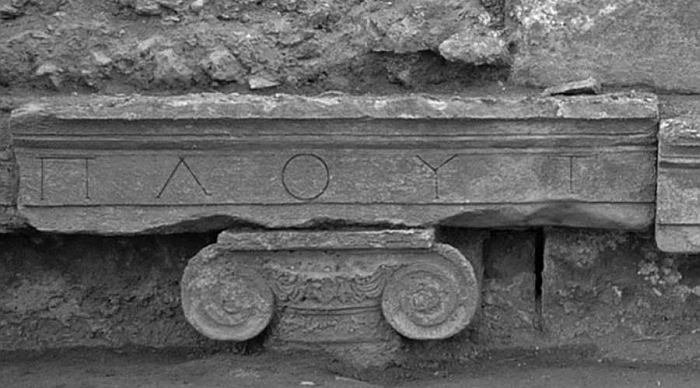 An inscription at the site to underworld gods Pluto and Kore. (Francesco D’Andria/University of Salento)

The team took measurements of the carbon dioxide levels in the arena connected to the cave, and found that the gas – slightly heavier than air – formed a ‘lake’ that rose 40 centimeters (15.75 inches) above the arena floor.

During the day, there’s still some carbon dioxide extending about 5 centimeters, evidenced by dead beetles found by the research team on the floor of the arena. And inside the cave, they estimated CO2 levels ranged between 86 and 91 percent at all times, since neither Sun nor wind can enter.

The team notes in their paper that there was a strong tourism element to the cave’s properties. Tourists could be sold small animals and birds that they could throw to the floor of the arena to be sacrificed, and on feast days, larger animals would be sacrificed by priests.

“While the bull was standing within the gas lake with its mouth and nostrils at a height between 60 and 90 cm, the large, grown priests (galli) always stood upright within the lake caring that their nose and mouth were way above the toxic level of the Hadean breath of death,” the team wrote in their 2018 paper.

“It is reported that they sometimes used stones to be larger.” 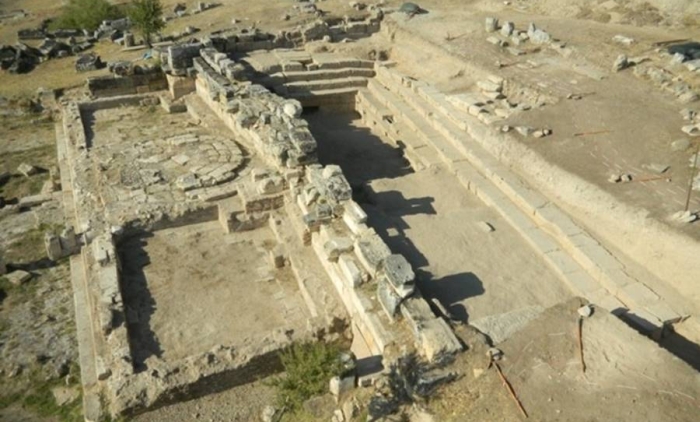 The site as it looks today. (Francesco D’Andria/University of Salento)

The spectators would see large, strong bulls succumbing to the fumes within minutes, while the priests remained strong and hale – a testament to the power of the gods or the priests, supposedly.

However, the researchers believe that the priests were well aware of the properties of the grotto and its arena, and probably conducted major sacrifices at dawn or dusk on calm days for maximum effect.

They could also have put their heads inside or entered the cave itself at midday ceremonies to demonstrate their own potency, holding their breath to survive.

But the presence of oil lamps also suggests that the priests went near the cave at night, according to the researcher who found it, Francesco D’Andria.

However they conducted their ceremonies, the discovery could help reveal the locations of other Plutoniums by studying seismic activity.

The research was published in the journal Archaeological and Anthropological Sciences.

A version of this article was first published in February 2018.

‘Funky Worm’ Fossil Helps Explain The Mysterious Origins of Amphibians
Sword Mistaken For Replica Is Actually An Ancient 3,000-Year-Old Weapon
Mysterious White Clouds Keep Popping Up Near The Bahamas, And No One Knows Why
Dozens in 7,000 Year Old Mass Grave Were Carefully Decapitated After Death
The Latest Milky Way Survey Shows Off an Incredible 3.32 Billion Celestial Objects