The partially mummified remains of an urbane Pompeii resident have been discovered in a tomb outside the city center erected before the famous eruption that buried the town in ash.

According to the inscriptions on the tomb, the deceased was a man named Marcus Venerius Secundio, who was in his 60s when he died and was, at one point, enslaved. Later in life, after being freed, Secundio became a well-off priest who conducted rituals in Latin and Greek.

The tomb inscription referring to these Greek rituals is the first direct evidence of Greek performances being held in the Italian city.

“That performances in Greek were organized is evidence of the lively and open cultural climate which characterized ancient Pompeii,” Gabriel Zuchtriegel, director of the Archaeological Park of Pompeii, said in a statement. 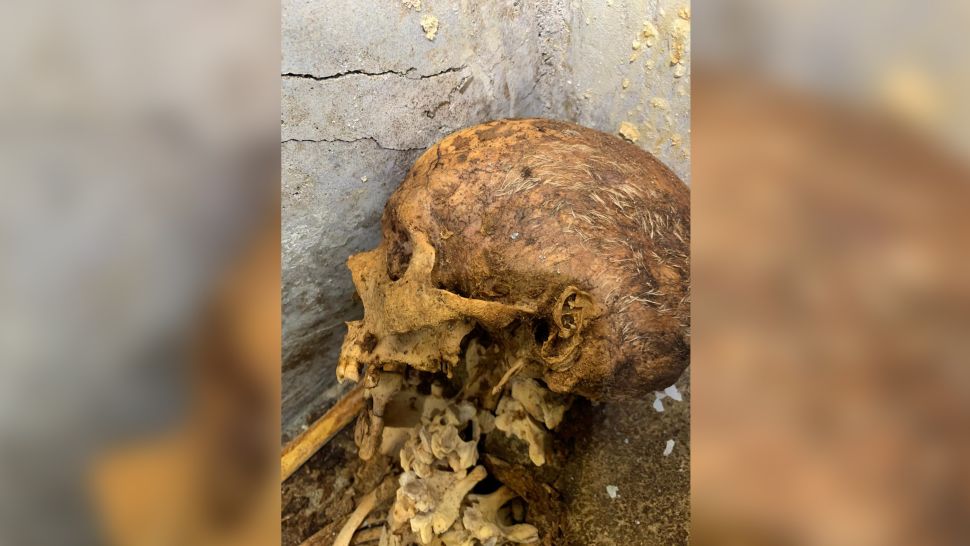 Above: A close view of the mummification of Marcus Venerius Secundio. Though the body is nearly 2,000 years old, close-cropped hair and an ear are still visible on the skull. The remains have been taken to a laboratory so researchers can learn more about whether this mummification was intentional.

Secundio’s remains rest in a rectangular masonry tomb that was once painted with images of green plants on a blue background; traces of this paint still grace the outside walls of the tomb. The partially mummified body was tucked into a sealed alcove in the tomb with an arched ceiling. Close-cropped hair and an ear are still visible on the skull.

Archaeologists also recovered scraps of fabric and two glass bottles called ‘unguentaria’ from Secundio’s tomb. Unguentaria are often found in Roman and Greek cemeteries and may have held oils or perfumes for graveside rituals.

The tomb also contained two funerary urns, including a beautiful blue-glass urn belonging to a woman whose name is recorded as Novia Amabilis (“kind wife”). Cremation was the most common method of burial for Pompeiians during the Roman period, according to archaeologists.

It’s not clear why Secundio’s remains weren’t cremated. It’s also not clear if his body mummified naturally or if it was treated to prevent decomposition.

“We still need to understand whether the partial mummification of the deceased is due to intentional treatment or not,” University of Valencia archaeologist Llorenç Alapont said in the statement.

Above: Blue glass urn found in the tomb of Marcus Venerius Secundio. The urn likely contains the cremated remains of a woman named Novia Amabilis.

The tomb is in the Porta Sarno Necropolis, which sits just outside the town walls by the Porta di Nola gate. A number of notables were buried in the necropolis, including city administrator Marcus Obellius Firmus, who lived during the reign of Emperor Nero (between 54 and 68 CE), according to ArchaeoSpain, a field school that coordinates internships at Pompeii and other sites.

What is known of Marcus Venerius Secundio’s life comes from a previously discovered record-keeping tablet belonging to the banker Cecilius Giocondus, as well as the inscription carved in marble on Secundio’s tomb. He was a slave at the temple of Venus before his release, after which he joined the priesthood of the imperial cult, dedicated to glorifying the memory of the Roman emperor Augustus, who ruled from 27 BCE to 14 CE.

(Archaeological Park of Pompeii/University of Valencia)

Above: Inscription on the tomb names Marcus Venerius Secundio and says that he performed four days of performances in Greek and Latin as a priest in the imperial cult.

As one of these “Augustales”, Secundio “gave Greek and Latin ‘ludi’ for the duration of four days”, according to the tomb inscription. “Ludi graeci” were theater performances in Greek, Zuchtriegel said.

“It is the first clear evidence of performances at Pompeii in the Greek language, which had previously been hypothesized on the basis of indirect indicators,” he said.

These performances indicate that Pompeii in the first century was a multi-lingual, multi-ethnic place where Eastern Mediterranean cultures melded.

In photos: A journey through early Christian Rome

Photos: Gladiators of the Roman Empire

These toadlets are so tiny they can’t balance anymore, and the footage is ridiculous
The deep ocean might store way less carbon than we hoped
NASA is on a mission to reclaim lost moondust. And some cockroaches
This weird star survived a supernova only to shine even more brightly than before
This plant lurks underground to trap prey in a way we’ve never seen before