High in the Himalayas of India, amid the snow-capped peaks, nestles a mystery. Roopkund Lake is a shallow body of water filled with human bones – the skeletons of hundreds of individuals. It’s these that give the lake its other name, Skeleton Lake, and no one knows how the remains came to be there.

One hypothesis is that some catastrophe, a single event such as a powerful storm, had befallen a large group of people. But DNA analysis of 38 of the skeletons has turned that idea on its head.

The remains appear to come from distinct groups of people from as far as the Mediterranean, and they arrived at the lake several times over a 1,000-year span.

“Through the use of biomolecular analyses, such as ancient DNA, stable isotope dietary reconstruction, and radiocarbon dating, we discovered that the history of Roopkund Lake is more complex than we ever anticipated,” said geneticist David Reich of Harvard Medical School.

The story began to unfold a decade ago. Geneticist Kumarasamy Thangaraj of India’s CSIR Centre for Cellular and Molecular Biology sequenced the mitochondrial DNA of 72 of the skeletons.

As Thangaraj and his late colleague Lalji Singh had expected, some of the skeletons had DNA consistent with a local Indian origin. But some did not. Several skeletons appeared to have originated around West Eurasia.

This warranted further investigation – a deep dive by way of whole genome sequencing. Genome-wide DNA was successfully generated for 38 individuals. These 38 genomes were then compared against 1,521 ancient and 7,985 present-day individuals from around the world. 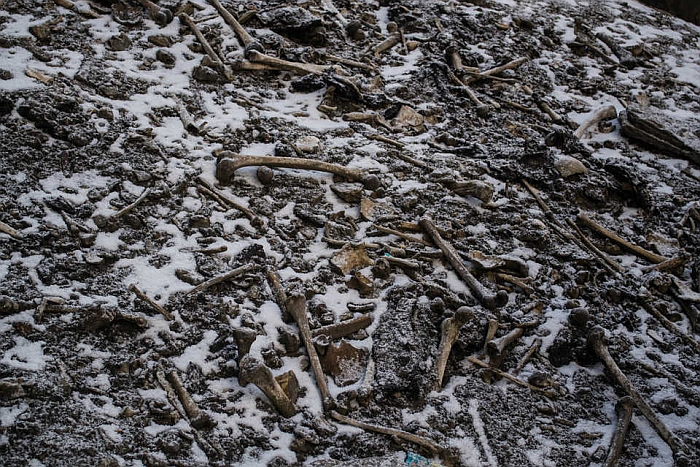 This analysis revealed three distinct groups. The largest consisted of 23 individuals with DNA similar to that of people from present-day India. Apart from this, they seemed genetically unrelated.

The second-largest group, comprising 14 individuals, was a huge surprise. Their DNA was most similar to people in present-day Crete and Greece.

Finally, the one remaining individual had DNA suggesting a Southeast Asian origin.

“We were extremely surprised by the genetics of the Roopkund skeletons,” said evolutionary biologist Éadaoin Harney of Harvard University.

“The presence of individuals with ancestries typically associated with the eastern Mediterranean suggests that Roopkund Lake was not just a site of local interest, but instead drew visitors from across the globe.”

Analysis of isotopes extracted from the bones supported these findings. Certain stable isotopes in the soil can be taken up into plants, which are then consumed by people. The isotopes replace some of the calcium in teeth and bones; these can then be matched to geographical locations.

“Individuals belonging to the Indian-related group had highly variable diets, showing reliance on C3 and C4 derived food sources. These findings are consistent with the genetic evidence that they belonged to a variety of socioeconomic groups in South Asia,” said archaeologist Ayushi Nayak of the Max Planck Institute for the Science of Human History.

“In contrast, the individuals with eastern Mediterranean-related ancestry appear to have consumed a diet with very little millet.”

Even more surprising was the staggered arrival times of the groups. Radiocarbon dating placed the Indian-related bones between the 7th and 10th centuries CE. It’s possible they were divided into different groups at different times within this timespan.

But the other two groups, from the Mediterranean and from Southeast Asia, were dated to between the 17th and 20th centuries CE. That’s just a few hundred years ago. And it’s possible that the remains that haven’t been tested could include other groups, from other times and other regions.

It’s possible we may never know – but future research could contain answers.

“It is still not clear what brought these individuals to Roopkund Lake or how they died,” said geneticist Niraj Rai of the Birbal Sahni Institute of PalaeosciencesRai.

“We hope that this study represents the first of many analyses of this mysterious site.”