It was found in 2015 – an isolated clue to a macabre mystery set in motion thousands of years in the past.

This ancient puzzle consisted of just a single piece: a solitary human cranium, discovered all by itself with no other skeletal remains around, resting inside a cave in Bologna, Italy, at the center of a cavernous depression the locals call Dolina dell’Inferno (Hell’s sinkhole).

It was not an easy thing to find.

The well-concealed skull, missing its lower jawbone, could only be reached by traversing a difficult cave passage called the Meandro della cattiveria (Maze of Malice), and then ascending a vertical shaft to a height of 12 meters (39 ft), where the cranium rested on a rocky ledge. 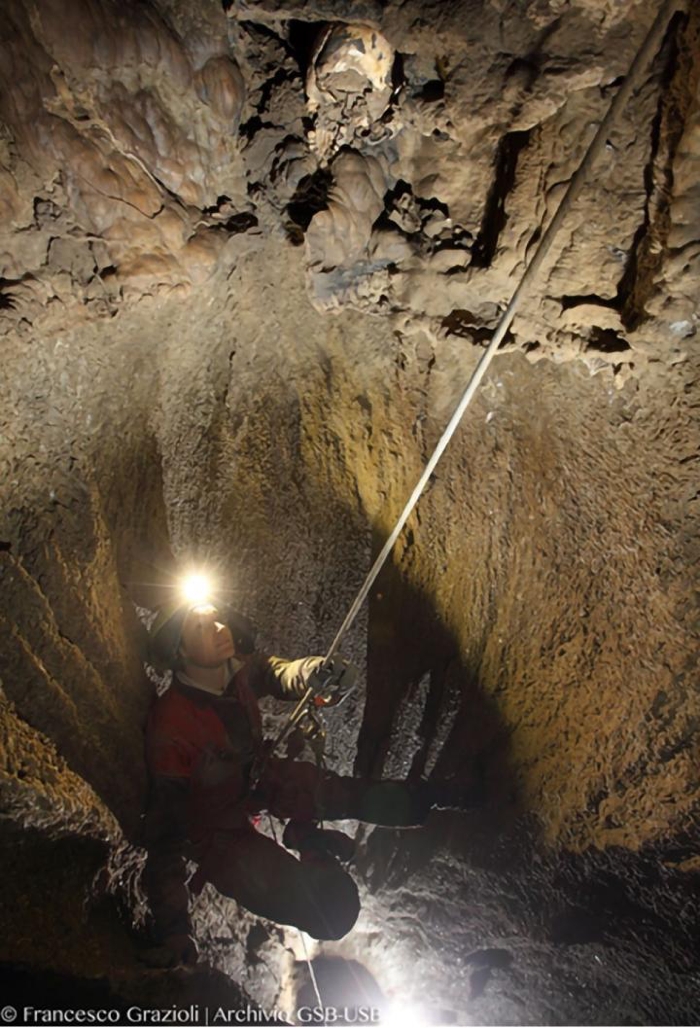 Due to difficulty in accessing the spot, speleologists weren’t able to retrieve the cranium until 2017, at which point researchers had a chance to study this mysterious, ancient specimen.

The lonesome skull turned out to be ancient indeed, with radiocarbon dating suggesting the cranium belonged to an individual who lived sometime between 3630 and 3380 BCE, placing them within the archaeological context of the early Eneolithic (aka Chalcolithic) period of the region.

Other Eneolithic human remains have been found in the general area; not in Hell’s sinkhole, but in a rock shelter approximately 600 meters (nearly 2,000 ft) away from the cave in which the skull was found.

So, the greater context makes some sense. But how exactly did this solitary skull get so far away from its Eneolithic counterparts, positioned high up on a ledge, yet buried within a malicious maze of a cave, and concealed at a depth of 26 metres (85 ft) below the ground?

According to anthropologist Maria Giovanna Belcastro from the University of Bologna – the first author of a new analysis of the skull’s unusual fate – a number of factors were at play.

Belcastro’s team investigated the cranium, which the team says most likely came from a young woman, aged between 24 and 35.

Evidence of various lesions on the sides of the skull are likely the result of human manipulations of the skull at the time of the woman’s death, the researchers suggest, perhaps reflecting ritualistic acts to remove flesh from the cranium, as part of a funeral custom.

Other lesions on the cranium, some believed to have been sustained antemortem (prior to death), may have been due to an injury that killed the woman, and other markings could be evidence of a kind of medical treatment delivered by her people.

As for how the skull became so separated from the rest of its skeleton, the researchers hypothesize that the cranium may have intentionally or accidentally been removed from the rest of the body, before rolling or being pushed along the ground by water or mud flows, until it somehow came to the edge of Hell’s sinkhole, ultimately falling within the depression.

Over time, water infiltration in the sinkhole could have dissolved gypsum deposits within the cave, creating the vertical shaft beside the skull’s secure resting place.

“The reactivated cave passage started evolving downward, with the formation of a lateral sinking creek and carving out the maze lying below,” the researchers write in their paper.

“This new reactivation was able to entrench approximately 12 meters of gypsum, connecting to the lowering base level.”

Various sediments lodged within the cranial cavity offer some support for this argument, suggesting matter got stuck inside the skull during water or debris flow, as the skull made its improbable, chaotic journey into the cave. Signs of other trauma to the cranium suggest plenty of bumps along the ride.

This hypothetical interpretation isn’t what necessarily happened, of course, which is something we can never truly know for sure. But as the researchers point out, of all the parts of a human skeleton, the shape of a skull makes it the most suited to doing a runaway.

“If the skeleton was intact by the time of this sequence of events, other skeletal elements, different in shape and size, might have remained stuck elsewhere and dispersed during transportation,” the authors suggest.

“The cranium would have rolled more easily than other skeletal parts in a water stream and debris flow… During its decomposition and those dynamic phases, it would have been filled with sediment. Therefore, it would have reached the cave and come to a stop on the plateau where it was found.”

The findings are reported in PLOS One.

Scientists Have Built a Macroscopic Tractor Beam Using Laser Light
An Expert Explains Why The Radioactive Water Stored at Fukushima Should Be Released
Dozens in 7,000 Year Old Mass Grave Were Carefully Decapitated After Death
Scientists Create Shapeshifting Humanoid Robot That Can Liquefy And Reform
There’s a ‘Lost City’ Deep in The Ocean, And It’s Unlike Anything We’ve Ever Seen