Fossil footprints found on the shore of an ancient lake bed in New Mexico’s White Sands National Park date as far back as 23,000 years ago, making them the oldest ever found in North America.

That timing means humans occupied southern parts of the continent during the peak of the final ice age, which upends our previous understanding of when and how they moved south.

The previous idea was that the first people to occupy North America crossed a land bridge that existed between modern-day Siberia and Alaska during the last ice age, between 26,500 and 19,000 years ago.

According to that theory, they would have had to settle near the Arctic because ice sheets covering Canada made it impossible for them to go south.

Then later, once these glaciers melted between 16,000 and 13,500 years ago, the migration toward South America began.

This new finding, however, “definitively places humans in North America at time when the ice sheet curtains were very firmly closed,” Sally Reynolds, a paleoecologist at Bournemouth University in England and co-author of the new study, told Insider.

So most likely, Reynolds said, humans migrated south in multiple waves, and one of those was before the last ice age. Those early people may have even sailed down the Pacific coast.

“Then more came down after the ice receded,” Reynolds said.

The finding was published Thursday in the journal Science, and the study also describes nearby tracks found from mammoths, dire wolves, and giant ground sloths – prey for ancient humans.

The oldest known footprints in the Americas

Reynolds’ team found 60 human footprints between 21,000 and 23,000 years old. The researchers estimated the tracks’ age by dating microscopic seeds from an aquatic plant found in layers of lake sediment that sandwiched the prints.

The footprints are now the oldest in the Americas, taking over from a 15,600-year-old footprint found in Chile a decade ago.

Most of the tracks belonged to teenagers and children, the team found, possibly indicating the youngsters played in the area while adults hunted and gathered.

Reynolds said that before this finding, the earliest estimate as to when humans started occupying North America was 16,000 years ago.

The only clue that people might have arrived earlier is a set of stone tools and artifacts found in remote Mexican cave. Archaeologists estimated that sediment ensconcing those artifacts was 32,000 years old, but that’s not a trustworthy measure, Reynolds said. Artifacts can migrate up and down through sediment layers over time.

“Footprints, by contrast, are fixed on the landscape,” Reynolds said. 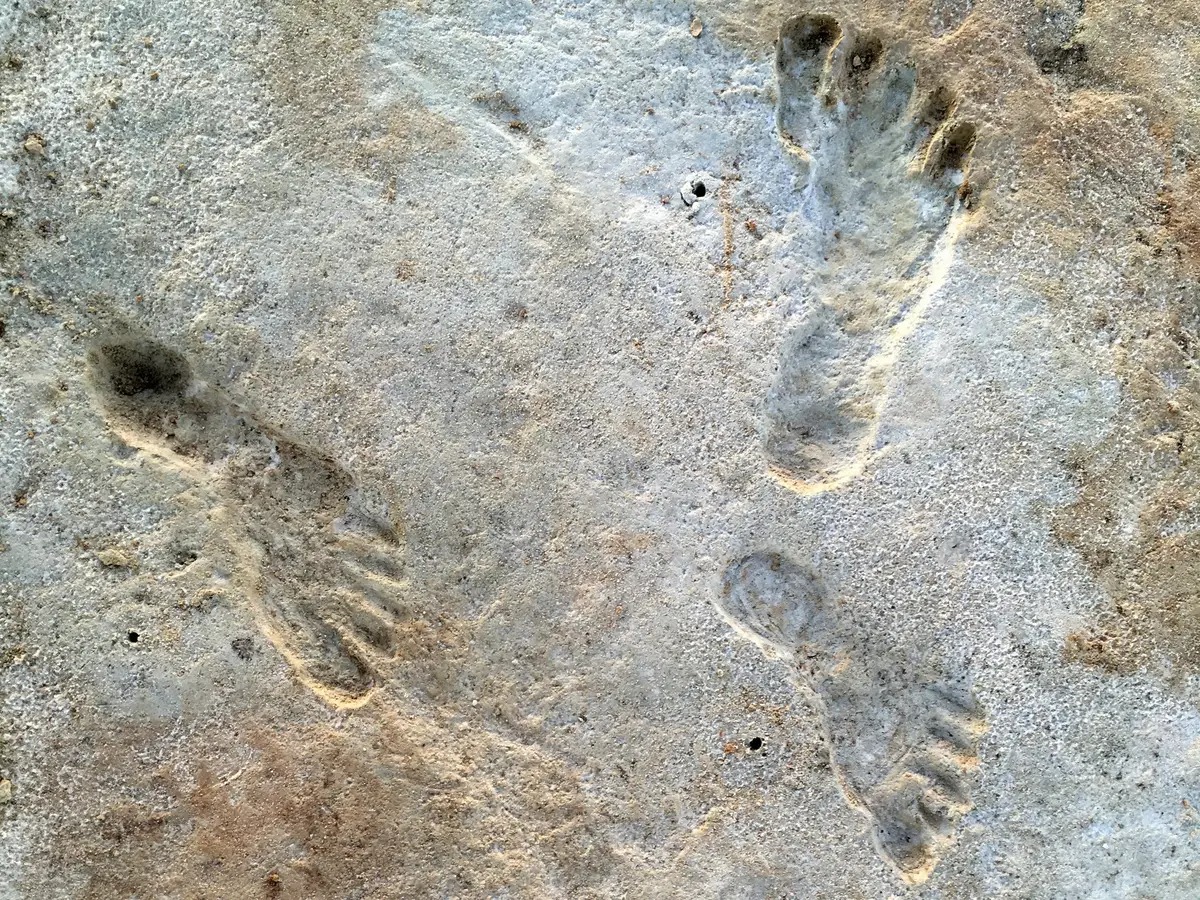 Humans could have traveled south by boat

Reynolds said it’s not yet clear how, exactly, humans traveled to the White Sands site – though there are several leading theories.

One suggests they traveled down the west coast via an ice-free corridor of land. Another proposes that they came by boat, possibly sailing from modern-day Russia or Japan and then expanding south by hugging the Pacific Coast.

Reynolds said she also thinks it’s possible our ancestors might have crossed the continent then sailed down the Atlantic coast, before trekking to New Mexico.

“There’s this hovering question mark over the role of their seafaring skills,” she said.

This isn’t the first remarkable discovery to come from the White Sands site.

“Its value goes far, far beyond the date of these new footprints,” Reynolds said.

Three years ago, her team uncovered a different set of human and animal tracks at the site dating back to about 15,500 years ago. Those footprints revealed an epic battle between predator and prey: A human was stalking a giant sloth.

“The human was walking right behind it,” Reynolds said, adding, “and the sloth is absolutely not liking it.”

Giant ground sloths went extinct some 12,000 years ago. Around the same time, up to 90 percent of all large-bodied animals in the world, including mastodons, prehistoric horses, and ancient giant armadillos, also went extinct.

Many archaeologists think that early humans in the Americas played an outsized role in that mass extinction there, given that it happened within a few millennia of their arrival.

“Humans show up and megafauna start dying,” Reynolds said. “It seems like an obvious cause and effect relationship.”

Scientists Don’t Know What to Do With This Weird ‘Blue Goo’ Ocean Organism
JWST’s First Glimpse of Mars Reveals The Red Planet in a New Light
Octopuses Have Favorite Arms They Use to Grab Different Prey
The Frogs Vanished, Then People Got Sick. This Was No Harmless Coincidence.
Earth’s First Continents Sank Into The Planet Before Rising Up Again