In the mud of London’s Thames river, a strange skeleton that lay hidden for 500 years has finally seen the light of day. Face-down, one arm upflung, the only remnants of his clothing a pair of half-rotted, thigh-high black leather boots.

It’s those boots that have archaeologists abuzz – an incredibly rare find.

“It’s extremely rare to find any boots from the late 15th century, let alone a skeleton still wearing them,” explained Beth Richardson of the Museum of London Archaeology (MOLA) to National Geographic.

Because the British Isles have such a rich and ancient history, England has legislation to ensure that archaeological assessments and appropriate preservation measures are carried out for all major development.

So the bones were found as part of excavations for the Thames Tideway Tunnel, a project to divert sewage away from the Thames, in a bid to reduce pollution.

It’s not unusual to find artefacts and remains in and around the Thames. The area around the river has been inhabited for a long time, and anyone who’s lived near a body of water knows how easy it is to lose items in the murky depths. But clothing of any kind is extremely rare.

“Historic clothing mostly survives accidentally, and the further back in time, the less there is. The majority of survivals are therefore elite or special garments that are exceptional compared with what the majority of people would have worn,” dress historian and archaeological textile specialist Hilary Davidson of La Trobe University in Melbourne, who was not associated with the discovery, told ScienceAlert.

“Also, it’s extremely rare to find boots still on their wearer. Most medieval footwear found in London was originally discarded into rubbish heaps, which is where it survived.”

The fact that he was still wearing the boots – as well as his location, face-down pose, and preliminary assessment of his bones – have allowed archaeologists to make a few educated guesses about his death, and the life he led beforehand.

The boots were well made, stitched with flax thread, with reinforced soles and stuffed with an unknown plant material, perhaps for a better fit. 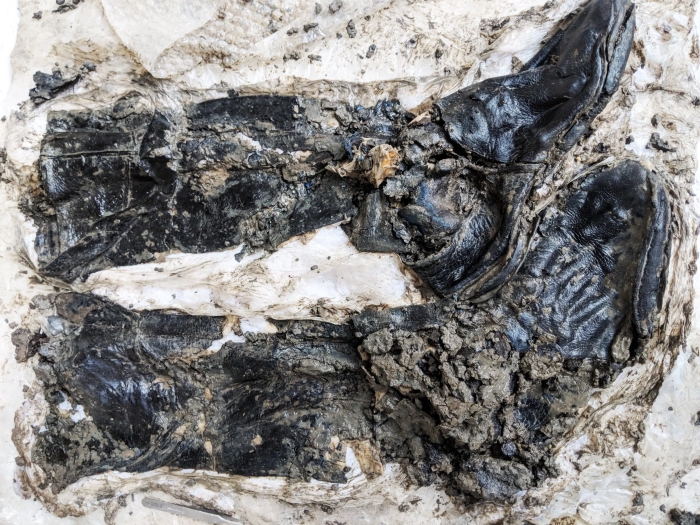 These boots are made for lastin’. (Museum of London Archaeology)

This lifestyle is supported by the style of the boot, which, according to Davidson, was not high fashion of the time, but close to the everyday shoes of the working class seen in paintings in the 14th and 15th centuries.

If he was a river-worker, this could help explain the remarkable state of the boots’ preservation.

“The tanning process makes leather even more durable, and if his boots were for working in the water they may have had extra protection like oils, fats, pitch or resin worked into the hide which has helped them last for 500 years – better than his skin.”

And they even offer clues as to how he died. MOLA notes that leather was a highly prized material at the time, often reused and recycled. So, had he been buried by his loved ones, it’s likely they would have removed his boots for re-use first.

This suggests that his death was a tragic one, either by accident or design, and examination of his bones supports this theory. He was less than 35 years old. However, since his bones show no signs of trauma, we’ll probably never know whether he was pushed, fell, or jumped.

Ongoing conservation work on the boots will hopefully reveal more about material reality – what people wore, how they wore it, and their relationship with the dangerous river that has proven to be an incredible thread woven throughout history.