The skulls of two baboons, mummified more than 3,000 years ago, have helped narrow down the location of a fabled “land of plenty”, which once supplied ancient Egypt with gold, frankincense, myrrh and monkeys.

Known as the land of Punt, or ‘God’s land’, this faraway fantastical realm may have actually existed outside its renowned mythology, despite no physical remnants of it having ever been found.

Ancient writings and drawings from the time have many archaeologists convinced the land of Punt was located somewhere around the Red Sea and was pivotal in the rise of the spice routes, also known as the maritime silk roads, which first linked Eastern and Western cultures and commerce.

Or perhaps they should have been called the ‘baboon beats’. Researchers now think the traffic of a sacred monkey, known as the Hamadryas baboon (Papio hamadryas), was “an important, contributing factor to the rise of Red Sea trade during the 2nd millennium BC.”

Ancient Egyptians seemed to have revered the Hamadryas baboon. The god Thoth, the supreme being of the moon and wisdom, is sometimes represented as a baboon (Thoth is also often depicted with the head of an ibis), with statues of the deity at temples. The ancient Egyptians also buried baboon mummies in tombs.

As such, ancient Egyptians travelled great distances to acquire living baboons. Their trade is actually the first recorded transplant of foreign fauna in human history.

The land of Punt was a major emporium for monkeys and Hamadryas baboons specifically. Artwork shows these animals being transported back to Egypt on boats and sometimes by land, yet the ancient trade of animals is often overlooked when historians discuss Punt’s mystery location. 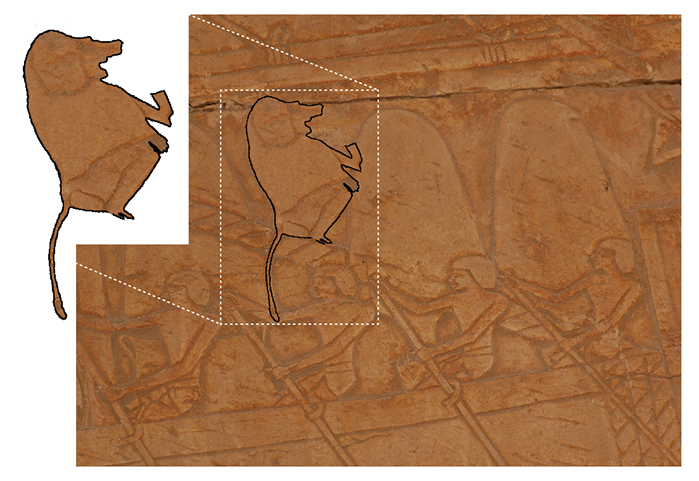 Detail from the walls of an Egyptian mortuary temple. The baboon is one of seven examples of Papio hamadryas depicted in the rigging of Egyptian ships returning to Egypt from Punt. (Nathaniel Dominy)

Tracing the origins of numerous baboon mummies found in ancient Egyptian temples and tombs, researchers now think the Hamadryas species was sourced from a region spanning Ethiopia, Eritrea, Djibouti, and some of Somalia and Yemen.

“This result is a testament to the tremendous reach of Egyptian seafaring during the 2nd millennium BC,” the authors write.

“It also corroborates the balance of scholarly conjecture on the location of Punt.”

In the past, experts have argued the fabled lands of Punt sit near the Somali coast. Others think they continue eastward toward Eritrea or include more of the Arabian Peninsula, such as present-day Yemen. There are even those who argue the land stretches as far as Uganda or Mozambique, although this notion is more strongly disputed.

“Many scholars view trade between Egypt and Punt as the first long maritime step in a trade network known as the spice route, which would go on to shape geopolitical fortunes for millennia,” explains anthropologist Nathaniel Dominy from Dartmouth College.

“Baboons were central to this commerce, so determining the location of Punt is important.” 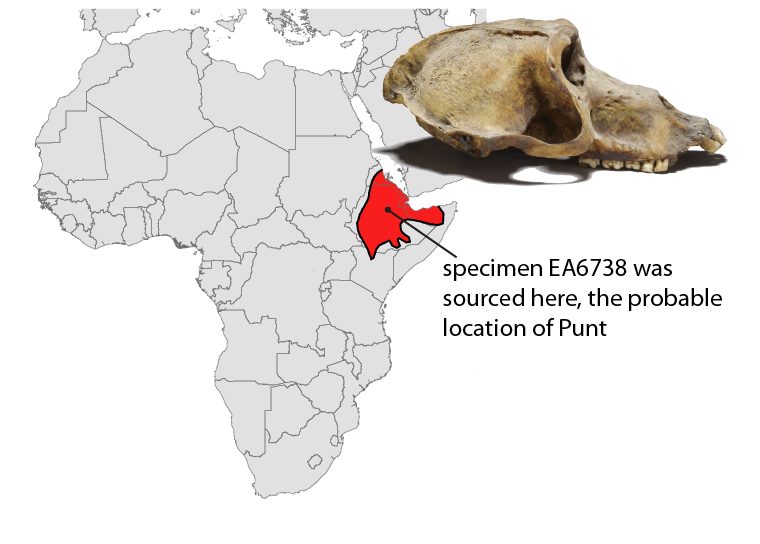 Map of Africa and skull of specimen EA6738 with import from somewhere in the red shaded region, a likely location for the fabled land of Punt. (Jonathan Chipman and Nathaniel Dominy)

Apart from examining mummified baboons, researchers analysed the tissue of 155 modern baboons from 77 locations (which existed within the current hypothesised location for Punt). Comparing the chemical compositions in the monkeys’ teeth, bones, and hair, the team was able to generally figure out where they came from.

Chemical signatures left in the animal’s remains can tell us information about where they lived. The mix of strontium isotopes vary with the food they eat, for example, and are fixed in the tooth enamel early in life.

Analysing these chemical signatures, the new findings show both the hamadryas mummies – EA6738 and EA6736 – were not born in Egypt. Instead, the authors think these mummified remains, permanently positioned like the god Thoth, came from a location in Eritrea, Ethiopia or Somalia.

One of the hamadryas monkeys, EA6738, appears to have lived in Egypt for many years. Its original home was found to sit squarely within the natural distribution of its species – right where Punt is thought to exist.

The other monkey, EA 6736, died shortly after arriving in Egypt. With just days or months in a new land, its hair and enamel did not have enough time to become tainted with Nile sediments.

Because their canines had all been pulled, the authors think these monkeys were living around people, possibly as royal pets, fruit harvesters, or even police animals. As the authors note: one bite from these fellas could cut through a thigh muscle right to the bone.

In contrast, five mummified baboons of another species, traded across Africa several hundred years earlier, appear to have been born and raised in Egypt under very different circumstances.

Because Egypt was thought to be devoid of any monkey species, the authors think it provides “tantalising hints of a captive breeding program for baboons at this time, probably in Memphis, an ancient capital in Lower Egypt, northwest of the Red Sea.”

What these monkeys were used for is another matter, but they appear to have lived harder lives than the idolised hamadryas. Their mummified bodies showed remnants of prolonged indoor confinement and vitamin D deficiencies.

“Setting aside the puzzling question of why ancient Egyptians deified P. hamadryas, the level of reverence was sufficient to justify the importation, husbandry, and mummification of it and another species, P. anubis, the olive baboon,” the authors write.

While often forgotten by historians and archaeologists, mummified baboons from ancient Egypt might be the last remaining clue to the long lost land of Punt.

“Trade in exotic luxury goods, including baboons, was the engine behind early nautical innovations,” says Dominy.

“For over 150 years, Punt has been a geographic mystery. Our analysis is the first to show how mummified baboons can be used to inform this enduring debate.”

The study was published in eLife.

Black Swans Could Be Entirely Wiped Out by a Single Virus, Scientists Warn
‘Extraordinarily Close’ Asteroid About to Zoom Past Earth, NASA Says
Archaeologists Find Hidden Ruins of ‘Complete’ Roman-Era City in Egypt
Scientists Create Shapeshifting Humanoid Robot That Can Liquefy And Reform
Could ‘The Last of Us’ Ever Happen? The Real Risks of a Fungus Pandemic