The foothills of the Andes mountains are revealing their bloody secrets: the ancient skeletons of sacrificed children.

Four of the skeletons – belonging to two children, a teenager and one adult – date to the Wari culture.

These four skeletons represent the region’s first known examples of human offerings from the Wari civilization, Edgar Bracamonte Lévano, the excavation’s director and research archaeologist with the Royal Tombs of Sipán museum, told Live Science in an email. 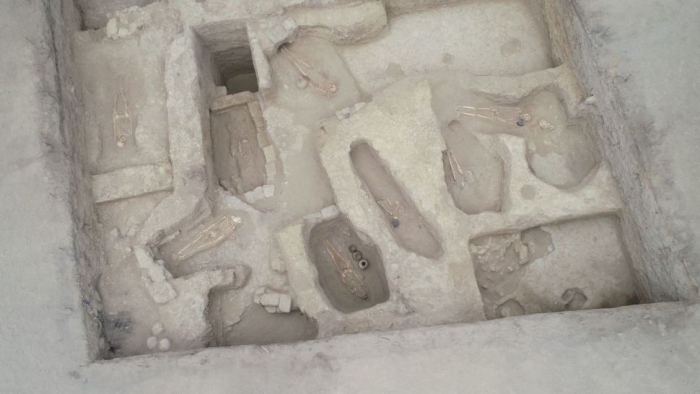 An overhead view of the excavation site. (Edgar Bracamonte Lévano)

In addition to human remains, the excavation uncovered skeletons from eight guinea pigs, as well as several alpacas and llamas, all of which were likely sacrificed. They also uncovered pots, bottles, and a knife with a half moon-shaped blade.

Related:Photos: the amazing mummies of Peru and Egypt

Bracamonte Lévano recognized the tombs as Wari because they were surrounded by three distinctive, D-shaped enclosures typical of the culture’s religious spaces.

The human offerings may have been “part of a possible ritual carried out at the time of starting the construction of these Wari-style religious spaces,” he said.

In addition to the four human offerings, the archaeological team uncovered a fifth individual who had undergone secondary burial. “That is to say, he was buried elsewhere and [then] reburied inside the D-shaped enclosure,” Bracamonte Lévano said. 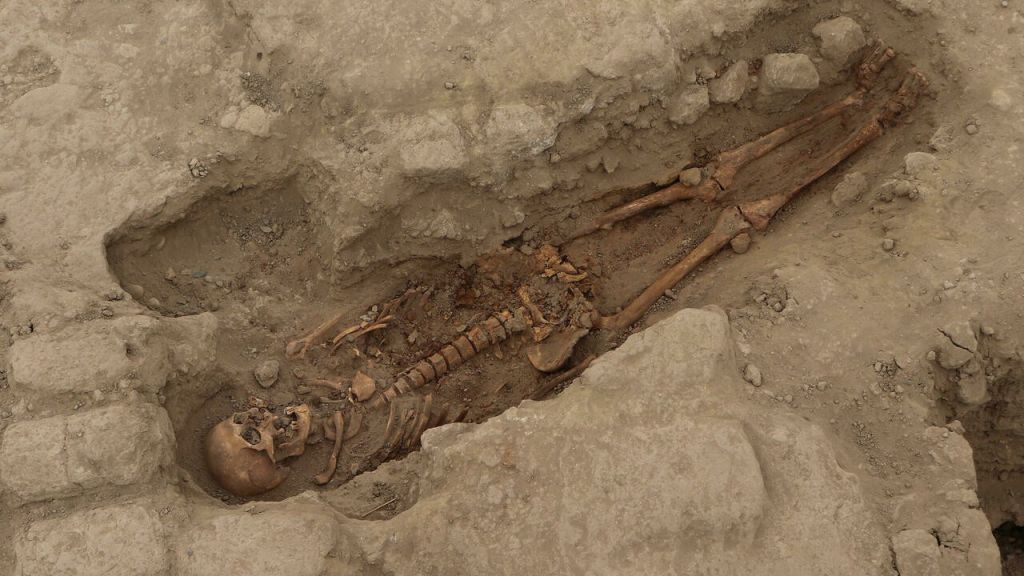 The Wari civilization flourished along the mountains and coasts of modern-day Peru from around AD 500 to 1000. Wari people were known for their finely woven textiles and sculpted pottery, as well as their roads and terraced agriculture, according to the World History Encyclopedia. These roads would later be incorporated into parts of the Inca Empire.

While the exact structure of Wari society remains open to debate, archaeologists have found evidence suggesting that religion was deeply intertwined with politics and that women were included at the highest levels of governance, as Live Science previously reported.

The other 25 skeletons found buried – though not sacrificed – at the site belonged to the Mochica, or Moche, culture. This civilization thrived in what is now Lambayeque from around AD 100 to 700, and would later be supplanted by the Wari.

Unlike Wari art, which tends toward abstract shapes and patterns, Moche art is famous for its more literal, naturalistic style. That makes artifacts from the two cultures easily distinguishable, Bracamonte Lévano said.

Among the most significant Moche discoveries in recent years is the Lady of Cao mummy, a tattooed noblewoman whose forensic reconstruction was the subject of a 2017 National Geographic documentary.

The Lord of Sipán, another famous Moche mummy discovered in 1987, resides in the Royal Tombs of Sipán Museum under Bracamonte Lévano’s watchful eye.

What Exactly Does It Mean to Die of ‘Old Age’?
There’s a New Quantum Computing Record: Control of a 6-Qubit Processor in Silicon
We May Finally Know Why Oceans in The Southern Hemisphere Are Getting So Warm
Your Body Smells When It’s Stressed And Your Dog Can Sniff It Out
Narwhals Are So Weird, Scientists Used Chaos Theory to Explain Their Behavior