East Africa is famously the birthplace of humankind and the location where our ancient hominin ancestors first invented sophisticated stone tools.

This technology, dating back to 2.6 million years ago, is then thought to have spread around Africa and the rest of the Old World later on.

But new research, published in Science, has uncovered an archaeological site in Algeria containing similar tools that may be as old as 2.44 million years.

The team, led by the archaeologist Mohamed Sahnouni, excavated stone tools at the site Ain Boucherit that they estimate are between 1.92 million and 2.44 million years old.

This suggests that human ancestors spread to the region much earlier than previously thought or that the stone tool technology was simultaneously invented by earlier hominin species living outside east Africa.

The artefacts belong to the “Oldowan” – the oldest known stone tool industry. Rounded river cobbles, used as hammer stones, were used to flake other cobbles, turning them into simple cores. The flakes were then transformed into scrapers and various knives by resharpening their edges.

Essentially this was a tool kit for processing animal tissue, such as marrow, bone and brain tissue, but also plant material. However, it is not known for sure which hominin species first created Oldowan tools – potentially Australopithecus or Homo habilis.

The stone tools are very similar to those of early Oldowan sites in East Africa. Bones at the site even have cut marks, where a stone tool has gouged into the bone during butchery. The cut marks may mean these hominins were actively hunting. 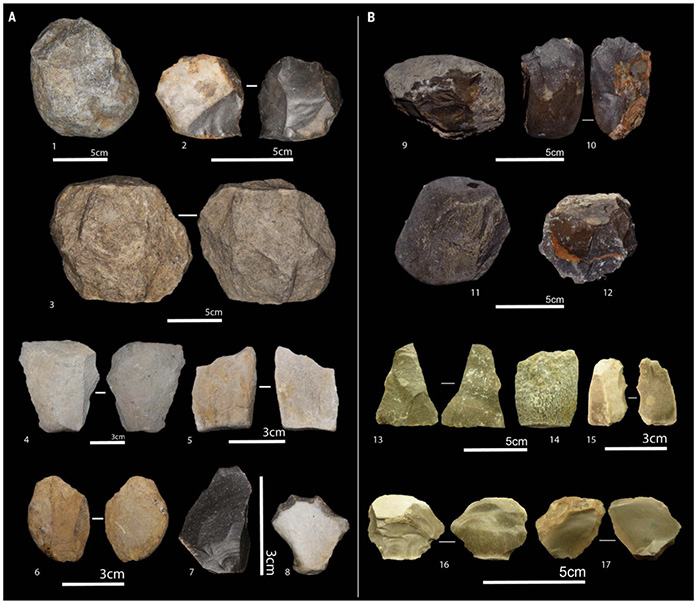 Some Oldowan tools found at the site, including cores and flakes (Shanouni et al., Science, 2018)

But we have only ever found early Oldowan tools in the east African rift valley before, more than 4,000 kilometres (2,500 miles) away. We have always assumed that it started there some 2.6 million years ago, so we shouldn’t find it so far from its original home at that age unless we have missed something.

Many archaeologists do indeed suspect there is an unseen ghost somewhere in the machine.

There have been discoveries of early hominin sites to the south, in Chad, that suggest that some of our earliest ancestors lived well beyond East Africa.

Oldowan-like sites have also been found outside of Africa, in Georgia, beginning at 1.8 million years ago – which seems surprisingly early.

The new discovery is telling us that our focus on East Africa as the birthplace of early humans is too narrow – we should be doing what Sahnouni and others have done all along and looking elsewhere.

The same team recently published findings about another Oldowan site in Algeria that is about 1.75 million years old, but to find early Oldowan tools well over half a million years earlier is a bit of a game changer.

It all hinges on how reliable that 2.44 million-year-old date really is. Dating specialists will be scrutinising the details very carefully. According to the paper, four different techniques were used.

Palaeomagnetic dating measures the direction and intensity of the Earth’s magnetic field in sediments – this is locked into rocks when they form, helping to tell us how old they are.

The team found that the upper level mapped onto a short period of normal polarity taking place between 1.77 million and 1.94 million years ago.

The lower level’s sediments fitted into a long period of reversed direction at between 1.94 million and 2.58 million years ago.

However, they used a less common version of the technique that was operating close to its upper limit of reliability at this age range. The measurement delivered an age of 1.92 million years old, younger than suggested by paleomagnetism.

There are some concerns about how suitable this last method is but the team has been honest about that. They also compared the dates with extinction times of animals present at the site, which suggested the date wasn’t impossible.

To get a better idea of the maximum age of the tools, they used a technique for estimating the rates of sedimentation – basically how long the different layers at the site took to build up.

You have to throw in some fancy statistical work though, and map it onto the palaeomagnetic results. Extrapolating backwards in time, the team calculated that the actual age of the lower level is 2.44 million years old.

I suspect dating specialists will be looking at this carefully.

Now to our ghost. The oldest tools ever found outside of Africa are the ones from Georgia dated to 1.8 million years ago. There is a small Oldowan-like site in Pakistan from around the same time and more core-and-flake sites in east China at 1.66 million years ago.

If the Georgian site represents the first move out of Africa, then these early African migrants got to Pakistan and China extremely quickly. 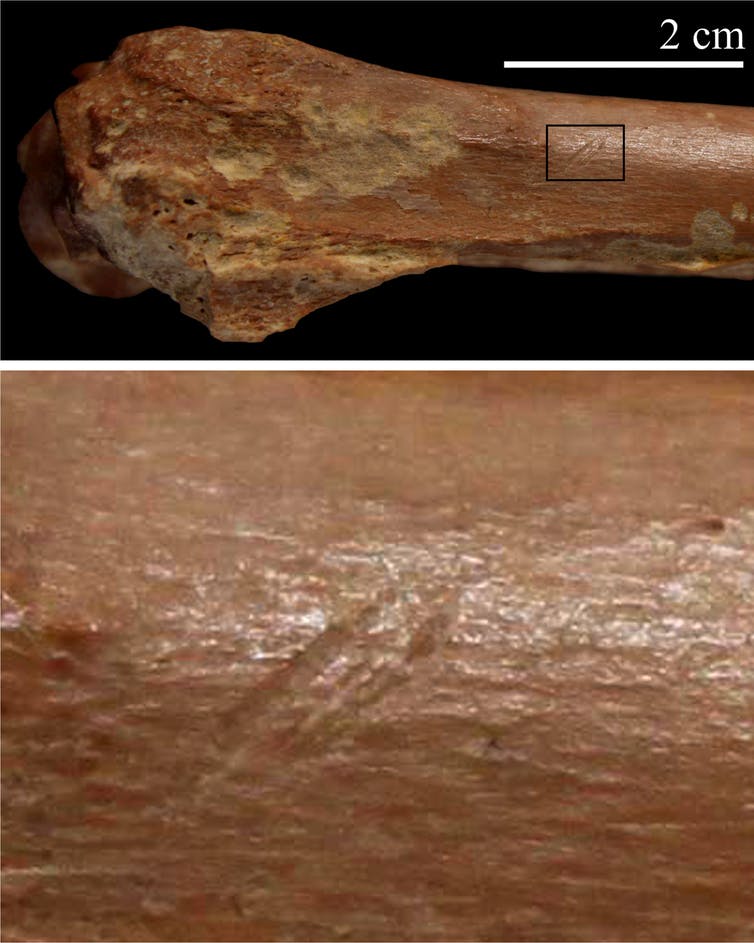 In Georgia, the tools may have been made by early Homo erectus, which dates back to about 1.8 million years ago.

As there is a Homo erectus specimen from China dated to 1.6 million years old, it is easy to assume that Homo erectus must have been the species that spread the tool technology around the world – and much quicker than we had thought.

But we cannot be sure of that. What if our ghost was an earlier hominin species from Africa predating Homo erectus – such as Homo habilis?

Maybe our mysterious hominin began to migrate out from Africa before 1.8 million years ago, and carried its core-and-flake industry eastwards.

That would certainly give it more time to cover those huge distances. Perhaps Homo erectus only migrated eastwards out of Africa later, following in the footsteps of an earlier traveller that we know nothing about.

So that’s a lot of maybes, but then nobody expected there to be Oldowan tools in Georgia when they were first found.

It caused a lot of controversy, but now most archaeologists are comfortable with the finding.

The Georgian archaeologists went back, did more work and proved their case. I don’t doubt Sahnouni and his team will be doing the same.

The Mysterious Asymmetry of Jupiter’s Asteroids May Finally Be Explained
Are Your Cats Playing or Fighting? Researchers Think They Can Tell The Difference
Wildfire Destruction in The Western US Has Doubled in Just 10 Years
The First Stars May Have Been Heavier Than 100,000 Suns
Bar Graphs Induce a Hidden Bias in Interpretation, Experiment Shows