Scientists have uncovered grisly, chilling evidence of the largest known mass sacrifice of children in the history of the New World.

In a new study, an international team reports the discovery of a shocking ritualistic slaughterhouse in ancient Peru: a mass killing that took place in the 15th century, claiming the lives of over 140 young boys and girls in a single unspeakable event.

The findings – the results of an epic six-year excavation at the Huanchaquito-Las Llamas site, in what is known as the Chimú state – have emerged in part in previous media accounts.

But the full grisly story of what happened to these innocent children – and to the more than 200 poor animals slaughtered alongside them – has never been officially told before. 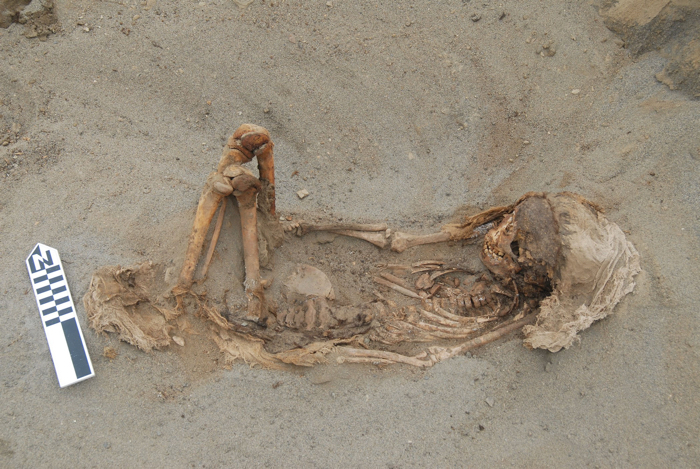 A typical child burial, laying on its back with the legs flexed (Prieto et al, PLOS One, 2019)

“This archaeological discovery was a surprise to all of us,” says anthropologist John Verano from Tulane University.

“We had not seen anything like this before, and there was no suggestion from ethnohistoric sources or historic accounts of child or camelid sacrifices being made on such a scale in northern coastal Peru.”

In 2011, the first clues to this ancient massacre started to emerge at the Huanchaquito-Las Llamas site, after nearby residents discovered human and camelid bones jutting from roadside dunes.

Initial excavations surfaced the remains of 43 children and 74 camelids (thought to be either llamas, or possibly alpacas), but the true extent of the body count still lay hidden from view.

“Excavations in 2014 and 2016 effectively tripled the number of sacrificial victims, resulting in a final count of 140 individuals (137 children and 3 adults) and 200 camelids,” the researchers explain in their paper, but note that incomplete remains scattered around the site suggest the sacrifice ultimately had a much higher toll.

Radiocarbon dating of the remains suggests this mass sacrifice took place around 1450 CE over an area of approximately 700 square metres (over 7,500 square feet), and analysis of the body parts indicates the children killed in the ritual were aged between five and 14 years old at the time of their deaths. 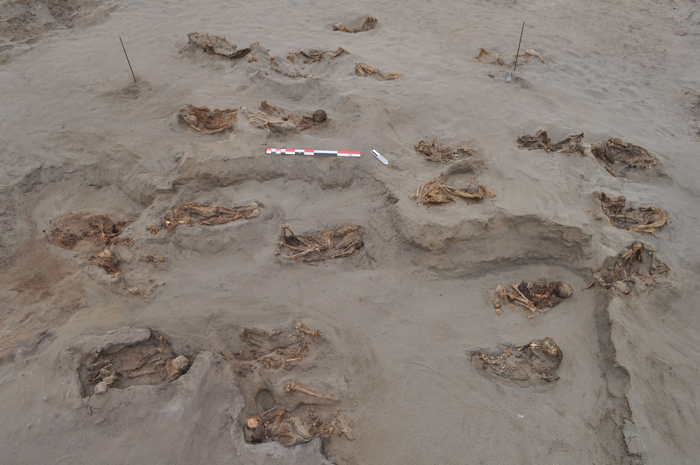 Precisely why they were killed, we’ll likely never know, although the team explains that children’s bodies were sometimes viewed as “hybrid entities” in ancient cultures, “and thus may have been viewed as particularly appropriate as messengers or gifts to the gods”.

Another clue may lay in the composition of the ground in which they were buried, marked by the elemental rage of the Chimú gods.

“The presence of a thick layer of mud on top of the sand in which the children and camelids were buried, as well as the presence of human and animal footprints made while the mud was still wet, suggest that the sacrificial event occurred shortly after heavy rainfall and flooding, in an arid region that receives negligible rainfall under normal conditions,” the researchers suggest.

“While the correlation between heavy rains and the sacrifice may be coincidental, it is tempting to hypothesise that the two events are associated, and that the mass offering of children and camelids may have been an attempt to appease the gods and mitigate the effects of a major ENSO event that occurred around 1400–1450 [CE].”

Gruesomely, cut marks detected on the children’s bones and the way in which their ribs were spread out, suggests they (and the animals) may have had their thoracic cavity cut open, hypothetically for the purposes of removing the heart – potentially a symbol of the offering the god-fearing adults were making to their makers.

Once killed, the children were buried, facing to the sea, while the slaughtered llamas were buried facing the mountains to the east. Evidence suggests some of the children had their faces painted before the event, and wore distinctive cotton headdresses.

“Variation in forms of cranial deformation and the wide range of carbon and nitrogen isotopic ratios observed in the children suggest that they are a heterogeneous sample, perhaps composed of individuals selected from various geographic or ethnic groups, rather than from a single local population,” the authors explain.

While the findings are horrific, to the extent they teach us more about this ancient culture – and the terrible lengths it went to – they are a significant addition to the fields of New World archaeology and anthropology.

“We were fortunate to be able to completely excavate the site and to have a multidisciplinary field and laboratory team to do the excavation and preliminary analysis of the material,” Verano says.

“This site opens a new chapter on the practice of child sacrifice in the ancient world.”

The findings are reported in PLOS One.

Astronomers Find What May Be a Habitable World 31 Light-Years Away
A Lost Interview With The ‘Father of The Big Bang’ Was Just Discovered
The First Stars May Have Been Heavier Than 100,000 Suns
New Prototype Device Generates Hydrogen From Untreated Seawater
Physicists Used Sound Waves to Give a Tiny Sun Its Own Kind of Gravity