Skin – the largest organ in the human body – envelops us from head to toe, letting us touch, feel, and interact with the outside world. But there’s one part of that organ even more attuned to touch than any other.

A new study has revealed just how receptive the sensory neurons in our fingers are: As it turns out, we can detect touch on the minuscule scale of a single fingerprint ridge.

“You would expect that a single papillary ridge would play a role, but it hasn’t been shown [before],” Ewa Jarocka, co-author of the study from Umeå University in Sweden told The Guardian.

Sensory neurons attached to receptors are dotted just underneath the skin’s surface, allowing us to detect touch, vibration, pressure, pain, and lots more. Our hands alone contain tens of thousands of these neurons, each one with receptors on a small surface area of the skin, called a receptive field.

To map these fields, the researchers strapped down the arms of 12 healthy people and glued their fingernails to plastic holders to really make sure they couldn’t move. A machine then wheeled tiny, 0.4 millimeter-wide cones around 7 mm apart across their skin (you can see what that looks like below) and the team recorded each neuron’s response using an electrode in the participants’ arms. Specifically, they were mapping the more sensitive zones – known as subfields – within these receptive fields.

These subfields also didn’t move when the machine wheeled the dots faster or slower, or changed directions, suggesting that these sensitive areas are anchored to the fingerprint ridges themselves.

“We report that the sensitivity of the subfield arrangement for both neuron types on average corresponds to a spatial period of ~0.4 mm and provide evidence that a subfield’s spatial selectivity arises because its associated receptor organ measures mechanical events limited to a single papillary ridge,” the researchers write in their new paper. 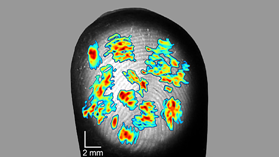 Excitingly, this is the first study to show that our fingerprint ridges are helping us feel the world around us more accurately.

“We have all those multiple hotspots, and each one responds to the details of 0.4 millimeters, which is the approximate width of the [fingerprint] ridge,” Jarocka told New Scientist.

“Then our brain receives all that information. This really offers an explanation to how it’s possible that we’re so dexterous and have such a high sensitivity in our fingertips.”

The research has been published in The Journal of Neuroscience.

These 5 Traces of Ancient Ancestors Still Exist in Human Bodies Today
Shooting Tiny, High Speed Bullets at a Spacecraft Could Speed Up Travel to The Stars
These Binary Stars Are So Close Together That Their Year Is Only 20.5 Hours Long
A Rare Green Comet Can Be Seen in The Sky, And It May Be Our Last Chance
The Latest Milky Way Survey Shows Off an Incredible 3.32 Billion Celestial Objects