One of the most enduring and tragic mysteries of recent Russian history may finally have a solution, with scientists saying they have a plausible explanation for what could have ultimately led to the deaths of nine mountaineers during a fateful expedition in 1959.

This infamous event – called the Dyatlov Pass incident – has launched dozens of conspiracy theories in the decades since it occurred, with enthusiasts dreaming up all manner of wild plots to explain what happened, including yeti attacks, aliens, and experiments with Soviet super-weapons.

In a relatively recent film adaptation, teleporting mutants become woven into the fable. It’s that kind of a mystery for many.

For scientists, the tragedy is something else, although from any standpoint, the facts are both gruesome and strange. How exactly did these nine experienced hikers and skiers suddenly meet their deaths one night in the northern Ural Mountains?

After the group failed to arrive at their destination on time, a rescue party was sent to look for them, with searchers first discovering their tent on the slope of the Kholat Saykhl (a name meaning ‘Dead Mountain’ in the local Mansi language).

Their tent was cut from the inside, as if the hikers had to rush to flee their night-time shelter, running into the freezing dark.

“Something unexpected happened after midnight that caused expedition members to cut the tent suddenly from the inside and escape towards a forest, more than 1 km downslope, without appropriate clothes, under extremely low temperatures (below -25 °C), and in the presence of strong katabatic winds induced by the passing of an arctic cold front,” researchers explain in a new study led by snow mechanics scientist Johan Gaume from EPFL in Switzerland.

The bodies were discovered next, some in the days and weeks later, some months afterwards.

“While hypothermia was determined to be the main cause of death, four hikers had severe thorax or skull injuries, two were found with missing eyes and one without tongue; some were almost naked and barefoot,” Gaume and co-author Alexander Puzrin from ETH Zürich summarise. 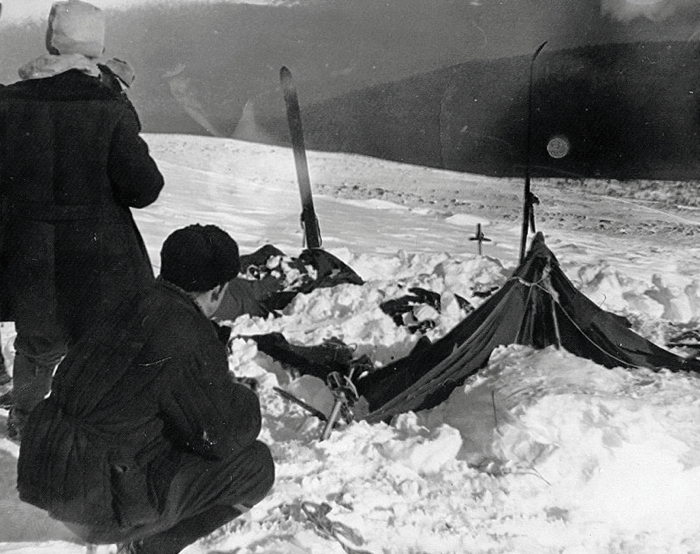 Amidst all the more colourful conjecture to arise about what happened, the most grounded explanations suggested an avalanche on the slope was the main factor in the deaths – forcing the sleeping, unprepared hikers to suddenly cut their way out of the tent and scramble away, before variously succumbing to the cold or their injuries in the dark.

However, the strange circumstances of the event have led many to reject this most obvious of causes: the relatively shallow slope of the mountain, the lack of evidence of an avalanche having occurred, and some of the injuries being unlike the kinds of injuries usually seen in avalanches.

Due to these kinds of uncertainties, the original Soviet investigation simply concluded a “compelling natural force” had led to the deaths. Decades later, a new Russian investigation released its reassessment of the tragedy, saying last year that an avalanche remained the most likely cause.

Now, an independent investigation by Gaume and Puzrin has come to the same finding, but with new scientific evidence to support how an avalanche could have occurred.

The team’s modelling suggests the shallowness of Kholat Saykhl wouldn’t have precluded an avalanche from being triggered several hours after the hikers cut into the snow to make a natural buffer against the wind.

“If they hadn’t made a cut in the slope, nothing would have happened,” Puzrin says.

“That was the initial trigger, but that alone wouldn’t have been enough. The katabatic wind probably drifted the snow and allowed an extra load to build up slowly. At a certain point, a crack could have formed and propagated, causing the snow slab to release.” 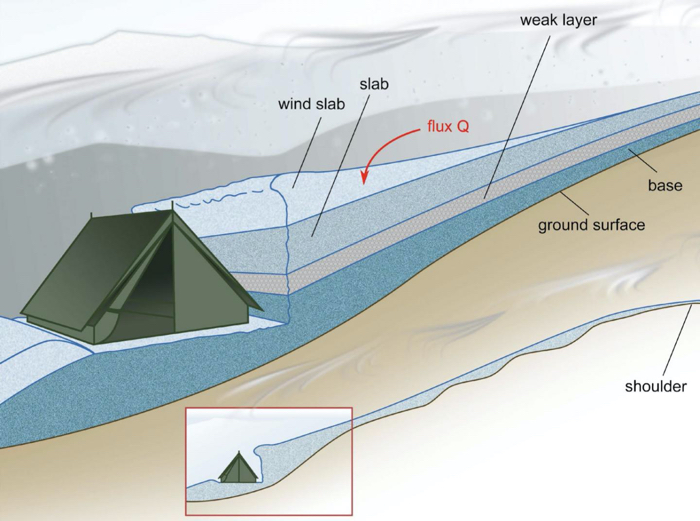 The researchers’ reconstruction of the slab avalanche. (Gaume/Puzrin)

Other simulations conducted by the team looked at what a snow slab would do to prone humans lying on top of their skis. The force of impact against the hikers, squashed between a heavy deluge of snow and the hard skis underneath, could have caused some of the severe injuries seen.

Of course, there remain several unanswered questions about the Dyatlov Pass incident that this study doesn’t address.

And perhaps nobody can expect this tragic mystery – which has now come to be a part of Russian folklore, six decades on – to lose the power and intrigue of its more fanciful interpretations and myths.

Nonetheless, the science of the avalanche theory is sound, the researchers say, and we now have the modelling to show what that ‘compelling natural force’ might perhaps have been.

“The truth, of course, is that no one really knows what happened that night,” Puzrin says. “But we do provide strong quantitative evidence that the avalanche theory is plausible.”

The findings are reported in Communications Earth & Environment.

Are Your Cats Playing or Fighting? Researchers Think They Can Tell The Difference
Archaeologists Find Hidden Ruins of ‘Complete’ Roman-Era City in Egypt
Mysterious White Clouds Keep Popping Up Near The Bahamas, And No One Knows Why
Intriguing Meteorite From Mars Reveals ‘Huge Organic Diversity’, Scientists Say
Scientists Reveal The Most Distant Galaxy We’ve Ever Found