The further back in time you go, the sparser the archaeological record grows. Many materials used by humans – wood, leather, fabric – simply don’t last and are swallowed by Earth under the implacable march of time. The Shigir Idol, in that context, is a marvel.

This wooden figurative statue with a number of mask-like faces was carved thousands of years ago, and preserved for millennia in the acidic, antimicrobial environment of the Shigir peat bog in the Ural Mountains in Russia.

Now, we have learned the statue seems to be even older than we thought.

In ten pieces, the idol was first discovered in 1890 and regarded as a curiosity, a totem pole-like carving from an earlier age. Its true significance wouldn’t start to emerge for more than another century. Radiocarbon dating revealed in the 1990s that the Shigir Idol was much older than we had guessed, placing it at around 9,750 years old.

Scientists were stunned. Not just because of the spectacular preservation of the artifact – many experts thought that the style of art was too sophisticated for the people of that time period.

Then, in 2018, another bombshell. The initial radiocarbon dating was performed from a sample on the outside of the wooden post, which had been subjected to ambient conditions and preservation efforts. A team of scientists conducted a new analysis, using a sample extracted from the artifact’s more pristine core, and found that it was closer to 11,600 years old.

Three members of that same team, archaeologists Thomas Terberger of the University of Gottingen in Germany, Mikhail Zhilin of the Institute of Archaeology RAS in Russia, and Svetlana Savchenko of the Sverdlovsk Regional Museum in Russia, have now reanalyzed multiple carbon dating results. Their finding is that the statue is even older still.

The wood used in the sculpture appears to be around 12,250 years old. Since the Shigir Idol was made from the trunk of a larch tree with 159 growth rings, this suggests that the statue itself was carved around 12,100 years ago – around 500 years earlier than the 2018 analysis showed.

This suggests that the sculpture was carved at the end of the Last Ice Age, and the beginning of the Holocene. (For comparison, Stonehenge is thought to be constructed just 5,000 years ago.) 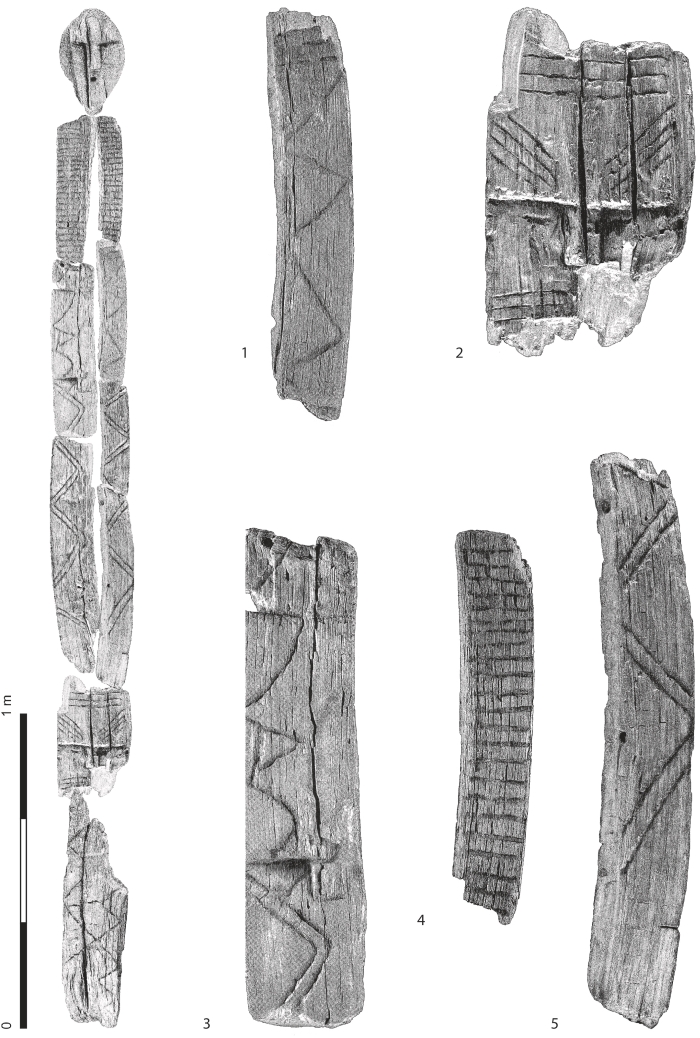 “The idol was carved during an era of great climate change, when early forests were spreading across a warmer late glacial to postglacial Eurasia,” Terberger told The New York Times.

“The landscape changed, and the art – figurative designs and naturalistic animals painted in caves and carved in rock – did, too, perhaps as a way to help people come to grips with the challenging environments they encountered.”

Although we can’t know precisely what the Shigir Idol was used for, its very existence is suggestive of an appreciation for art and craftsmanship. The people who created it appear to have had an appreciation for symbolism that, at one time, experts thought emerged much later.

The absence of objects that demonstrate this level of culture and spirituality on the archaeological record cannot be taken as evidence of a lack of culture, the researchers argue. The people who built the Shigir Idol clearly had the skills for shaping and carving wood; this one artifact is hardly likely to have been the only object of its kind.

In fact, the geometric carvings on the statue match similar patterns seen across Europe during the same time period. It isn’t the Shigir Idol itself, but the circumstances of its preservation, that is the extraordinary ingredient in its survival through to the present.

The researchers argue that the statue suggests the hunter-gatherer people who populated the Urals during the Mesolithic period lived rich and complex spiritual lives, and that very, very few of their objets d’art survived the ravages of time.

“We have to accept that hunter-gatherers had complex rituals and were capable of very sophisticated expression of ideas and art,” Terberger told The Guardian in 2018. “These things didn’t start with farmers, they began with hunter-gatherers much earlier.”

There are many peat bogs scattered throughout the Urals, some of which have also yielded wooden artifacts from thousands of years ago.

Most of them remain unexplored, and excavation expeditions are expensive and time consuming. Any secrets in their dark depths will likely remain that way for some time to come.

The research has been published in Quaternary International.

Incredible ‘Fairy’ Robot Sails on The Breeze Like a Floating Dandelion
Are Your Cats Playing or Fighting? Researchers Think They Can Tell The Difference
Embers of an Ancient Inferno Pinpoint The Worst Extinction in Earth’s History
‘Polluted Realism’: How Monet’s Art Mirrors The Evolution of Smog
This Small Australian Marsupial Is Quite Literally Dying For Sex