Back in 2005, professional yo-yo performer Dave Schulte AKA “Dazzling Dave” started having weird sensations in the index finger of his right hand.

It felt cold, and later became tender and even began to turn purple – not ideal in the hand he uses for yoyo tricks.

“I had no idea what caused it .. but it had been a very cold week and I was working every day at different schools,” explains Schulte in an email with ScienceAlert.

Perplexed with Schulte’s worsening finger, his doctor told him to go and get an angiogram – a medical imaging technique where a contrasting substance is injected into the blood.

“I ended up having to spend 11 hours in the hospital and they put a catheter in my leg, and fed it through my arteries up past my heart and into my shoulder to inject a dye down my arms,” explained Schulte in a forum post at the time. 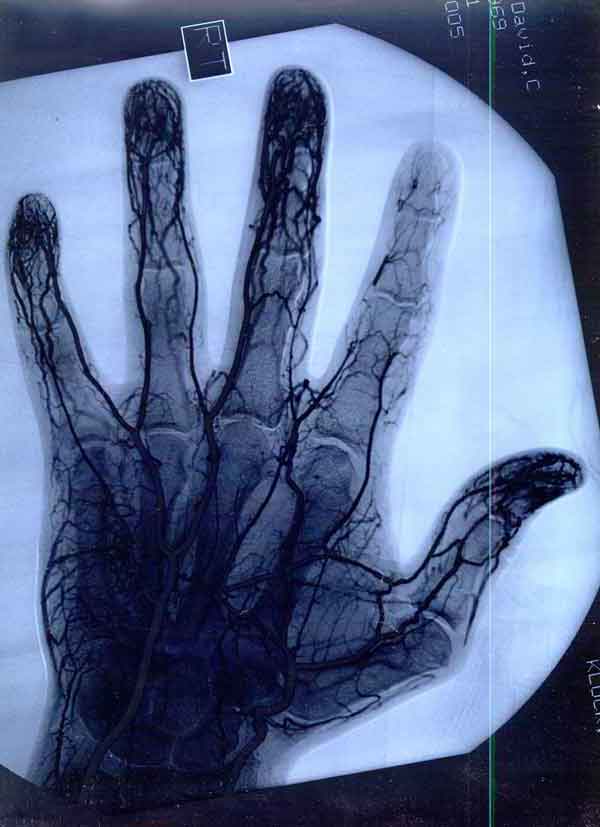 What you’re seeing in the photo above are the results of that angiogram. A hand specialist diagnosed him with a vasospasm – this means the blood vessels in his finger constricted, not allowing much blood through into the finger tip.

Not enough blood in extremities of the body is a huge issue. For example, gangrene is the result of a loss of blood supply; if the issue isn’t fixed, sometimes the body part needs to be amputated.

“I went on a blood thinning drug in hopes that it would allow flow to the fingertip. I used it for a month, but had bad side effects,” Schulte told ScienceAlert.

“The good news is that it did restore some blood flow to the fingertip. Since the threat of amputation was now gone, I just went back to normal.”

But I know what you’re thinking: how did it happen? Was it to do with the yo-yo string looped over the finger, as some have suggested?

If you think back to a more innocent time when a yo-yo may have been in your own toy arsenal, you’ll know that’s not it. The normal place for a yo-yo to sit is actually on the middle digit.

“The injury is most likely caused by the impact of the yo-yo on the hand when I catch it,” explains Schulte.

“The biggest misconception of the injury is that I put the slip knot on my index finger to yo-yo. I do not do that, I attach it to the normal place.”

The scare of amputation didn’t stop Schulte yo-yoing though. He started the practice in college to try and get through a stressful finals season. Now, he has racked up 26 years in the yo-yo game.

“The issue is always present, but I do not notice it until the cold months of the year. The blood flow is still slightly restricted, and the finger gets very cold,” he said.

“In the summer months days will go by and I will not even think about it.”

And if you want to check out Dazzling Dave in action, we’re just going to leave this video below.

Dogs Can Be Aggressive For Lots of Reasons, And One of Them Is You
A Rare Green Comet Can Be Seen in The Sky, And It May Be Our Last Chance
People Who Don’t Exist Look More Real Than Actual People, Study Finds
This Asteroid Has Survived For 4 Billion Years. That Could Be a Huge Problem
New NASA Nuclear Rocket Plan Aims to Get to Mars in Just 45 Days