When it comes to lavish funeral arrangements, you’d have to do well to beat the mystery soldier buried some 2,000 years ago in the south of England. A new exhibition is about to reveal some of the details of this man and his burial site, described as “the most elaborately equipped warrior’s grave” ever found in the country.

A sword and decorated scabbard, a spear, a helmet, a headdress, and a shield with a large bronze boss on the front are among the items that the warrior was buried with. Pots and other grave goods were discovered alongside the Iron Age body as well.

The man and his possessions were first found 12 years ago, but now funding has been released to put some of his treasures on show at the Novium Museum in Chichester, as well as to run DNA tests on the warrior’s remains to try and work out more about who he was.

“In more than 30 years of archaeology this is the most spectacular discovery that I have witnessed,” says archaeologist James Kenny, from Chichester District Council. “Thanks to scientific research, analysis and the involvement of world-renowned archaeological experts, the story of the mystery warrior just gets better.”

In light of his funeral arrangements, it’s thought that the mystery warrior would have been one of the most prestigious in the country. He may have fought as part of the Gaul army resisting Julius Caesar and the Romans.

It’s possible that the sword, spear and shield were deliberately broken after the man died – seen as a way of decommissioning items that had been used in battle, once the soldier using them had passed on.

“This is one of the most exceptional finds in this particular archaeological period and it is of international significance,” says Kenny.

There’s still a lot that we don’t know about this ancient warrior though. A 2014 paper looking at the grave site and the wider landscape raised the possibility that the man could be a priest, rather than a warrior. 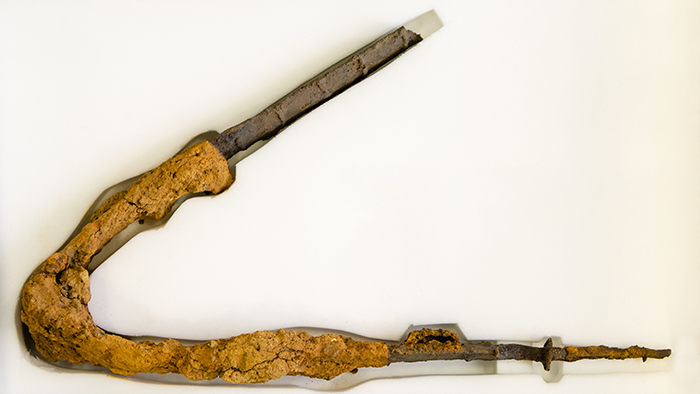 Experts estimate that the man was aged between 30 and 45 at the time of his death, based on dental records and other evidence; he was around 1.57 metres (5 foot 3 inches) tall. Oh, and his teeth were in fairly bad shape.

The skeletal remains also show indications of an active lifestyle and possibly horse riding, while there doesn’t seem to be any obvious sign that the man died in battle. That still leaves a lot of gaps in this warrior’s story.

But even if we don’t have more of his story just yet, now the public will be able to get a proper look at what’s left of this resistance fighter and his extensive collection of weaponry. The exhibition is opening on 25 January 2020, and will be accompanied by workshops, activity days and lectures.