Experts think they might have found the oldest-ever Greek copy of The Odyssey, the epic poem by Homer which is widely regarded as one of the most significant works of literature ever put down on paper… or rather clay.

An ancient slab of stone thought to date back to the 3rd century CE looks to contain 13 verses of the poem, detailing the return of the protagonist Ulysses to his home island of Ithaca after two decades of journeying.

The plaque was discovered in the ancient city of Olympia in southern Greece, and is the fruit of three years of work carried out by the Greek Archaeological Services agency and the German Institute of Archaeology. 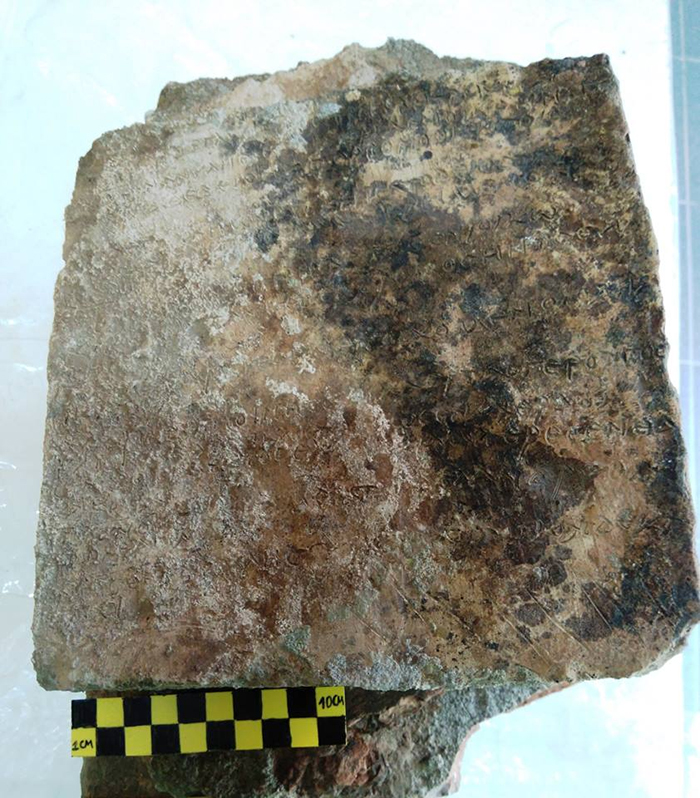 The plaque discovered in Greece. (Greek Ministry of Culture and Sports)

If that date is confirmed, it makes the stone carving the oldest written record of the epic poem found yet in the country – at least until the next discovery. Fragments of parchment containing the poem have been recovered in Egypt dating back to the 3rd century BCE.

The general consensus is that Homer composed the poem around the 8th century BCE, almost certainly to be read aloud rather than written down. It would then have been passed on orally by storytellers down the generations.

It’s gone on to have a huge influence on Western literature, thanks to its pioneering use of a non-linear plot and variety of characters.

The first printed (rather than handwritten) copy of the poem was produced during the late 15th century, still in the original Greek. An English translation arrived in 1616.

Since then it has influenced countless other works, from the 2000 Coen brothers movie O Brother, Where Art Thou? to the landmark 1922 James Joyce novel Ulysses – in which the events of the poem are reimagined and retold across a single day in 20th century Dublin.

It’s even influenced the English language: if you’ve ever wondered why a long and arduous journey is known as an odyssey, it’s because of this ancient poem.

We’ll have to wait and see what date the slab is finally given when it comes to determining whether there is indeed a new record for Homer’s poem, but it’s a fascinating example of the way written texts can survive through the centuries, or even millennia.

If you really want something to last though, as the discovery in Olympia shows, you need to chisel it into stone – that way archaeologists can happen upon it as many as 3,000 years later.

New technology is opening up our access to ancient works of literature too. Earlier this year, scientists in California were able to read an 11th century manuscript that had been overwritten with other text, through the use of high-energy X-rays.

Whether or not our Facebook and Medium posts will last that long remains to be seen, but everything considered, we’d still rather take Homer’s poetry than the efforts of modern-day artificial intelligence bots.

A Strange Thing Happens to Wolves Infected by Infamous Mind-Altering Parasite
A ‘Wormhole’ Built on a Quantum Computer Teleported Information as Predicted
‘Holdout Humans’: Chilling Glimpse Into Our Future if We Survive Another Million Years
These Mysterious Fungi Belong to an Entirely New Branch on The Tree of Life
A New Satellite Is One of The Brightest Objects in The Sky, And It’s a Big Problem