As the Roman Empire drew to a dramatic collapse towards the end of the 5th century, ripples were felt across its former territories. Balances shifted as new powers rushed to fill the vacuums Rome’s retreats left behind.

The changes to the everyday lives of the people are far less well documented, but a cemetery in Pannonia Valeria – in what is now Hungary – is shedding light on the cultural upheaval. And it seems that the founders of that community welcomed newcomers – and even adopted their customs, including modifying the shape of their skulls.

During this time, “the population decreased and the settlement structure changed drastically. Communities fled to the western provinces with the promise of safety, while others sought refuge in forts and cities looking for protection,” the researchers wrote in their paper.

“The newly arriving groups also founded rural settlements often in connection to the former Roman infrastructure, such as roads and fortified places.”

Until around 470 CE, a site now called Mözs-Icsei dűlő was the burial ground of just such a settlement. Its 96 graves have been well documented, with work going back decades.

But archaeologists in Germany and Hungary have now closely examined the remains of 87 individuals, analysing the strontium isotopes in the bones to figure out how the community came together.

That’s because some stable isotopes – like strontium – are taken up by plants from the soil. When humans eat these plants, the isotopes can replace some of the calcium in teeth and bones, which can then be dated and matched to geological regions known to have particular isotope ratios.

Using this technique, the team was able to identify three distinct populations across two or three generations buried in the Mözs-Icsei dűlő cemetery.

The first population is a small founder population. They were buried in Roman-style brick graves, with Roman and Hun style grave goods, and the strontium isotope ratios in their bones indicated a largely local diet.

The second is a foreign group of 12 individuals who seem to have arrived at the community around a decade after the founders. They all had similar strontium isotope ratios, indicating that they had a shared origin. Ten of them also had modified skulls, suggesting they practised head shaping – the use of tight cloth bindings in infancy to elongate the still-hardening skull.

We still don’t know why ancient cultures practised cranial modification. Although it’s dying out today, it’s an ancient practice, and there’s evidence for it dating back thousands of years all around the world - and, interestingly, it seems to have no effect on cognitive function.

The third, slightly later group suggests that the customs of both earlier populations seem to blend together in the following generation. Not only were there founder-style grave goods included in later burials, head shaping seems to have exploded in popularity. 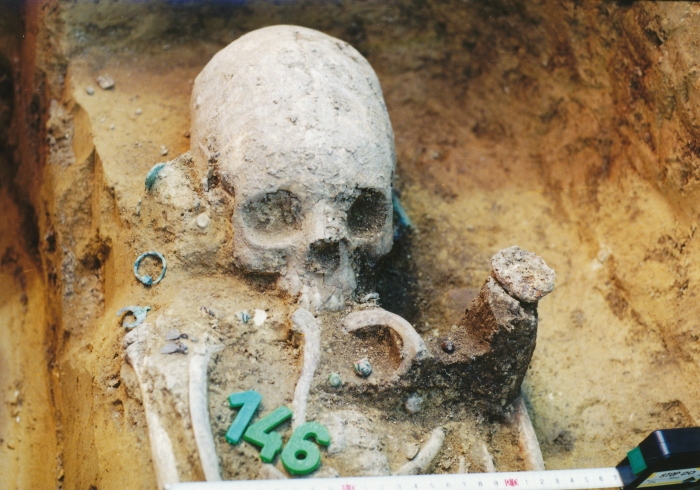 In all, the 96 graves contained 51 individuals with deliberately modified skulls, marking the site as one of the biggest concentrations of artificial cranial deformation in the region.

As we have previously reported, reasons for the practice seem varied globally throughout history – from a marker of social status, to a side-effect of binding a baby’s soft head to protect it while it grows. Or maybe some people just thought it looked really cool.

Whatever the reasons for it, the practice here is a beautiful example of how a community can grow and thrive under regional strife, joining their differences to build something new together.

“The community .. accepted and integrated men, women, and children of different geographical and cultural backgrounds during the two to three generations of its existence. The isotope data indicate that residential changes played a remarkable role and occurred not only on an individual basis, but also in groups of a shared cultural background and lifestyle,” the researchers wrote in their paper.

“Placed into the historical narrative, this could be understood as the emergence of a Roman-‘Barbarian’ Mischkultur (mixed culture), in which Romanised ‘Barbarians’ and ‘barbarised’ late Roman population groups were indistinguishable.”

The research has been published in PLOS One.

Deciding to Read This Article Isn’t The Result of Gravity Crushing Your Quantum Spirit
It’s worse than we thought: food miles account for a sickening amount of emissions
Meteorite discovery challenges our understanding of how Mars formed
Astronomers discover a bizarre spiral object swirling around the Milky Way’s center
600,000-year-old artifacts reveal the identity of some of Britain’s oldest toolmakers