Seven Viking tombs holding well-preserved skeletons, including possible twin infants, have been discovered in the Swedish town of Sigtuna.

The archaeologists discovered the 1,000-year-old remains of eight people – four adults and four children – inside the tombs; they were likely Vikings who had converted to Christianity.

“The Christian character of the now-excavated graves is obvious because of how the tombs were laid out,” said Johan Runer, a project manager with Uppdrag arkeologi, a cultural resource management company, which led excavations of the site.

Most of the people had been buried flat on their back in an east-west position, whereas people who followed traditional Viking beliefs in this area of Sweden at this time tended to be cremated, Runer said.

They also found deposits of charcoal and in some cases partially burnt caskets, suggesting fire rituals were involved in at least four burials.

“Such phenomena are rather common in Christian Viking period graves, but previously rather rare in Sigtuna,” Runer told Live Science in an email.

Stone cairns were also found on top of four of the tombs, one of which also was surrounded by a stone cist (stones positioned in a box shape) surrounding it.

“These features are previously not known from the town of Sigtuna,” said Runer, who noted that they are common among early Christian graves in this area of Sweden, which is located about 23 miles (37 kilometers) northwest of Stockholm. 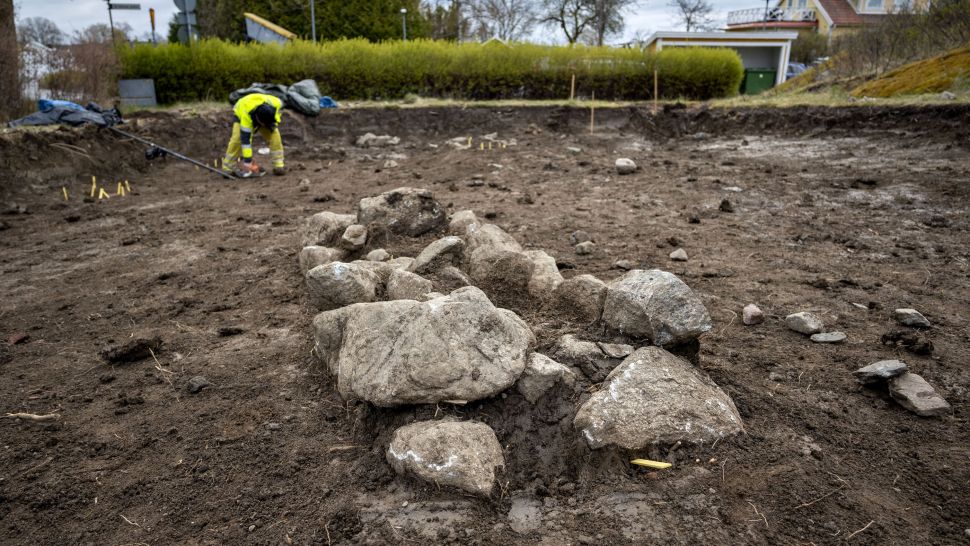 Remains of a stone cairn were found over this tomb. (Uppdrag arkeologi)

The archaeologists say one of the tombs could contain the bodies of twins.

“In one tomb, there were two very small infants of seemingly the exact same age,” Runer said.

The team’s preliminary interpretation is that “this grave contains the tragic result of a late miscarriage of a couple of twins.”

The tombs also contained several interesting artifacts. One individual was buried with a “leather belt containing fittings of iron and silver-gilt copper alloy,” and silver coins were found in his mouth, Runer said.

Placing coins in a person’s mouth “is a rather common practice for Viking period Christian burials in middle Sweden,” he added. Another tomb contains “a beautifully ornated bone comb” found in a case, Runer said.

Archaeologists discovered the tombs in late April during a survey of an area where a house was going to be built. The archaeologists excavated the site in May and are continuing to analyze the skeletons and artifacts. An osteologist is expected to examine the well-preserved skeletons in the fall.