Once upon a time, Falerii Novi was a thriving community. For hundreds of years, generations of people strode its streets, lived out their lives under its roofs, shopped in its markets, and worshipped in its temples – from its founding in 241 BCE up until the Early Middle Ages.

When Falerii Novi was abandoned in around 700 CE, it was mostly left to the ravages of time. A casual passerby might notice little more of its remains than a few watchtowers and ancient walls dotting grassy fields, in its quiet location 50 kilometres (31 miles) north of Rome.

An abbey was later built on part of the site, but the thriving hub that once stood there has left its ghostly footprint below the ground – and now archaeologists have used state-of-the-art ground-penetrating radar technology to generate the most detailed map of the walled city yet – without ever breaking the ground.

Their research has revealed a sprawling 30.5-hectare (75.4 acre) site encompassing a bath complex, market and temple, as well as streets and even a system of water pipes under the walls, connecting the aqueduct and public baths. They also identified evidence of stone robbing, which is exactly what it sounds like, resulting in missing walls.

By adjusting the depth of the radar penetration, the team – a collaboration between Cambridge University in the UK and Ghent University in Belgium – was able to see changes to the town over time, known as time-slices. 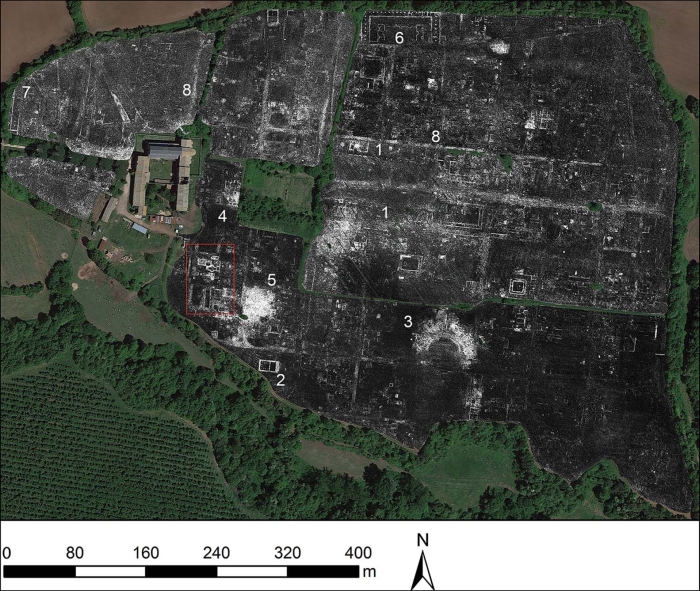 Ground-penetrating radar (GPR) has been used for decades in a range of applications, such as in engineering and the military. It relies on sending radio waves into the ground, and measuring how they’re reflected.

Since different materials reflect the radio waves back with different amplitudes and travel times, this means we can effectively see what’s underground in high resolution, without ever having to dig it up.

It’s a tool that’s seeing increasing use in archaeology, particularly as the technology improves. Over the last decade, it’s evolved from manually waving a single antenna over the ground to towing multi-antenna arrays from all-terrain vehicles, pairing the measurements with satellite GPS.

This is what the researchers used to map Falerii Novi. A full analysis of the results is still pending – the scans resulted in 28.68 billion data points, or approximately 4.5GB of raw data per hectare, and studying that will take time.

Nonetheless, the researchers have already made some surprise discoveries, especially considering how extensively the town has been studied previously.

“GPR survey at Falerii Novi has revealed previously unrecorded public buildings, such as a temple, a macellum or market building and a bath complex. While these buildings fall within the expected repertoire of a Roman city, some are architecturally sophisticated – more elaborate than would usually be expected in a small town,” the researchers wrote in their paper.

“More unexpected were two very large structures adjacent to the walls. Immediately to the east of the north gate is an enclosure defined on three sides by a substantial porticus duplex (covered passageway with central row of columns) approximately 90 × 40 metres [295 x 131 ft] in size, opening onto the street.

“A pair of structures, each with a central niche, face each other within the interior of the complex. While we know of no direct parallel to this structure, this was evidently a public monument.”

The team identified several atrium houses opening onto the street, their plans revealed by their floor surfaces. Time-slices of these buildings show that they have been remodelled over time – much as we renovate our own houses to suit changing tastes or circumstances.

The layout of the town was also much less “standardised” than expected, which suggests that our understanding of Roman-era town planning still has a ways to go.

A more complete analysis of the site is no doubt pending, but the results so far are already tremendously exciting. A site like Falerii Novi is far too large to excavate archaeologically, but this research shows that GPR surveys can be an excellent way of studying ruins that are inaccessible beneath the ground.

There are some limitations, of course. Many ancient sites have remained in use, and have modern structures built over them, or have been forested; you can’t drive a GPR antenna array over those sites.

Also, some soil types are poorly suited to GPR; clay, for instance, can cause loss of signal strength, whereas rocky soil can scatter the signal.

The sheer volume of data is pretty daunting, too, but software designed to detect architectural features could be of assistance there. In short, these limitations do not subtract from the breathtaking promise of the techniques used here.

“The astonishing level of detail which we have achieved at Falerii Novi, and the surprising features that GPR has revealed, suggest that this type of survey could transform the way archaeologists investigate urban sites, as total entities,” said archaeologist Martin Millett of Cambridge University.

“It is exciting and now realistic to imagine GPR being used to survey a major city such as Miletus in Turkey, Nicopolis in Greece or Cyrene in Libya. We still have so much to learn about Roman urban life and this technology should open up unprecedented opportunities for decades to come.”

The research has been published in Antiquity.

‘Dark Data’ Is Leaving a Huge Carbon Footprint, And We Have to Do Something About It
Scientists Win Physics Nobel Prize For Proving Einstein Wrong
A Planet-Sized Heatwave Has Been Found in Jupiter’s Atmosphere
2 Incredibly Rare Exoplanets Could Give Us Insights About a Planet Close to Home
There’s a New Quantum Computing Record: Control of a 6-Qubit Processor in Silicon