A female wolf pup mummy, perfectly preserved as it remained locked in permafrost for 57,000 years, is finally giving up some of its secrets, including how the grey wolf died and ended up alone in the ice so long ago.

The mummified grey wolf (Canis lupus) was discovered by a gold miner excavating permafrost in Yukon, Canada, in July 2016, in the Klondike gold fields near Dawson City.

“She is the most complete wolf specimen ever found from the ice age,” said lead author Julie Meachen, an associate professor of Anatomy at Des Moines University in Iowa.

“All her soft tissue, her hair, her skin, even her little nose is still there. She’s just complete. And that is really rare.”

Several types of analysis – including radiocarbon dating, DNA sampling and measurements of levels of different versions, or isotopes, of oxygen  - confirmed when the pup died.

X-rays of the skeleton and teeth also revealed that Zhùr (meaning “wolf” in the Hän language of the local Tr’ondëk Hwëch’in people) was only 7 weeks old when she met her untimely end.

X-ray images of the ancient wolf pup. (Government of Yukon)

Aside from being the most complete ice age wolf ever discovered, Zhùr’s mummy was also particularly important to researchers because it was uncovered in North America.

“These types of specimens can be fairly common in Siberia, but they are much harder to get to,” than remains found in the Yukon, Meachen told Live Science.

As such, the remains were much easier to access and study, and they also provided a rare opportunity to see where North American wolves originated, she said.

Meachen and colleagues reconstructed Zhùr’s mitochondrial genome – the genome found in the cells’ energy-making structures called mitochondria that gets passed along the maternal line – finding similarities with both Beringian wolves, an extinct group that lived in ancient Yukon and Alaska, and Russian grey wolves. The pup’s relation to individuals from both North America and Eurasia is proof of ancient continental mixing across the Bering Land Bridge, an ancient land bridge that once connected Alaska and Russia, the researchers said.

Having such an intact specimen to study also gave the researchers an opportunity to look at what ice age wolves were eating.

“When I looked at the X-rays and could see her intestines, that gave me a little thrill,” Meachen said. “I’d never seen 57,000-year-old intestines before.”

Although in the end, bone analysis, not her stomach contents, allowed the team to reconstruct Zhùr’s diet. 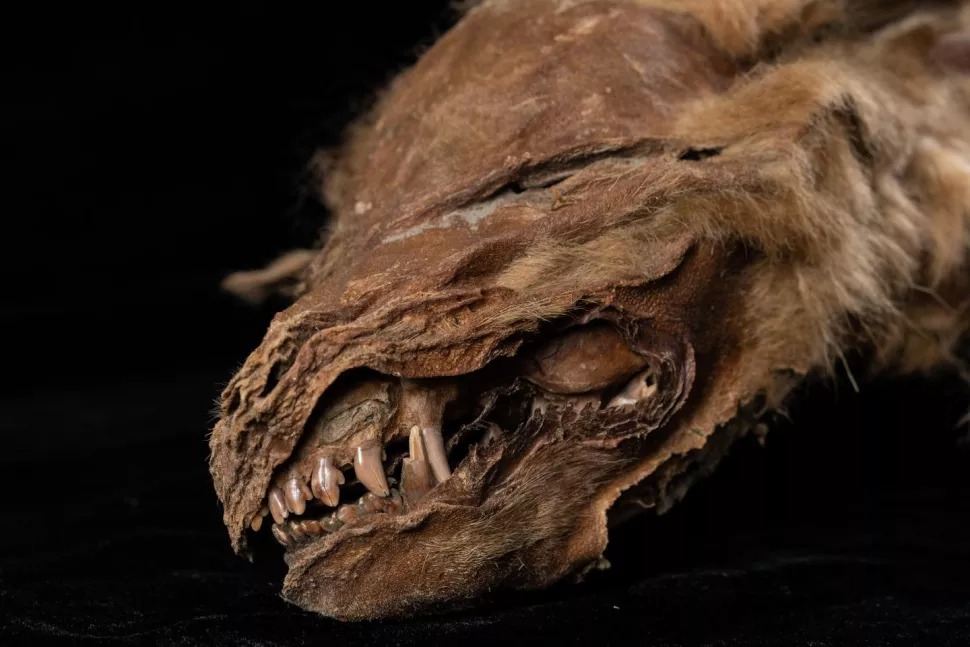 A closeup of the wolf pup’s head (Governme. of Yukon)

During her short life, Zhùr fed on mostly aquatic food, such as Chinook salmon that currently spawn in the Klondike River, they found. This isn’t uncommon in modern wolves, which have been shown to seasonally switch to aquatic diets in Alaska.

However, scientists had assumed that Yukon wolves would have mainly eaten bison or musk oxen during the ice age.

One of the biggest remaining mysteries surrounding Zhùr is how she was mummified and why she ended up alone. The researchers’ hypothesize that she was killed when her den collapsed on top of her.

This would explain why the remains are so perfectly preserved, because they would have been instantaneously entombed in a cold, dry and airtight environment.

But if she did die in this way it begs the question – where was the rest of her family? Given her age, it seems unlikely that she would ever have been in the den without her mother or siblings.

“Maybe the mum and siblings were outside the den when it collapsed and that is why Zhùr was left on her own inside the den,” Meachen said.

“It is possible she was an only pup, but that would be rare, usually wolves have several pups at a time,” she explained, but ultimately she admits that, “It is impossible to tell for sure.”

Findings like this one could become more common, as the globe warms and once solid permafrost begins to thaw and divulge buried secrets.

“We’re always excited when we make discoveries like these,” Meachen said, “but it is an indication that the world is warming and that’s not good for our environment. The planet is hurting.”

The new study was published December 21 in the journal Current Biology.

‘Extraordinarily Close’ Asteroid About to Zoom Past Earth, NASA Says
Are Your Cats Playing or Fighting? Researchers Think They Can Tell The Difference
Mysterious White Clouds Keep Popping Up Near The Bahamas, And No One Knows Why
This Island Appeared Out of Nowhere, With Life Forms Never Seen Before
Scientists Create Shapeshifting Humanoid Robot That Can Liquefy And Reform