The power to be unseen has long captured our imaginations – from ancient myths to modern fantasies of rings and cloaks that can bestow such a gift.

One way to achieve a type of invisibility is to let light pass straight through you – to become transparent. This requires a body composed of tissues that neither scatter nor absorb the light that hits them. The natural world is full of living examples of this.

“It is relatively common in aquatic species where animal tissue shares a similar refractive index to the surrounding water. “

A refractive index describes the speed of light passing through a material, compared with a vacuum.

Since the path of a light ray bends in direct response to its change in speed as it passes from one medium to another, lower refractive indices mean less bending. And less bending means clearer transparency. For example, window glass has a refractive index of 1.52. Water is 1.33. And air is a lot closer to 1.

Many microscopic and marine critters have taken advantage of transparency, to hide where there’s nothing but water to hide within, including classic jellyfishes, sea snails, and lots of baby fishes.

“Air and tissue are quite different in their refractive indices, so transparency is predicted to be less effective in terrestrial species. Indeed, terrestrial examples are rare,” explained Barnett.

But some landbound plants and animals have also evolved at least partial transparency – from insect wings to the leaves of the humble succulent Haworthia cooperi.

Here are six see-through species and their strategies for invisibility.

Aside from their eyes and stomach, glass squid are almost entirely transparent. 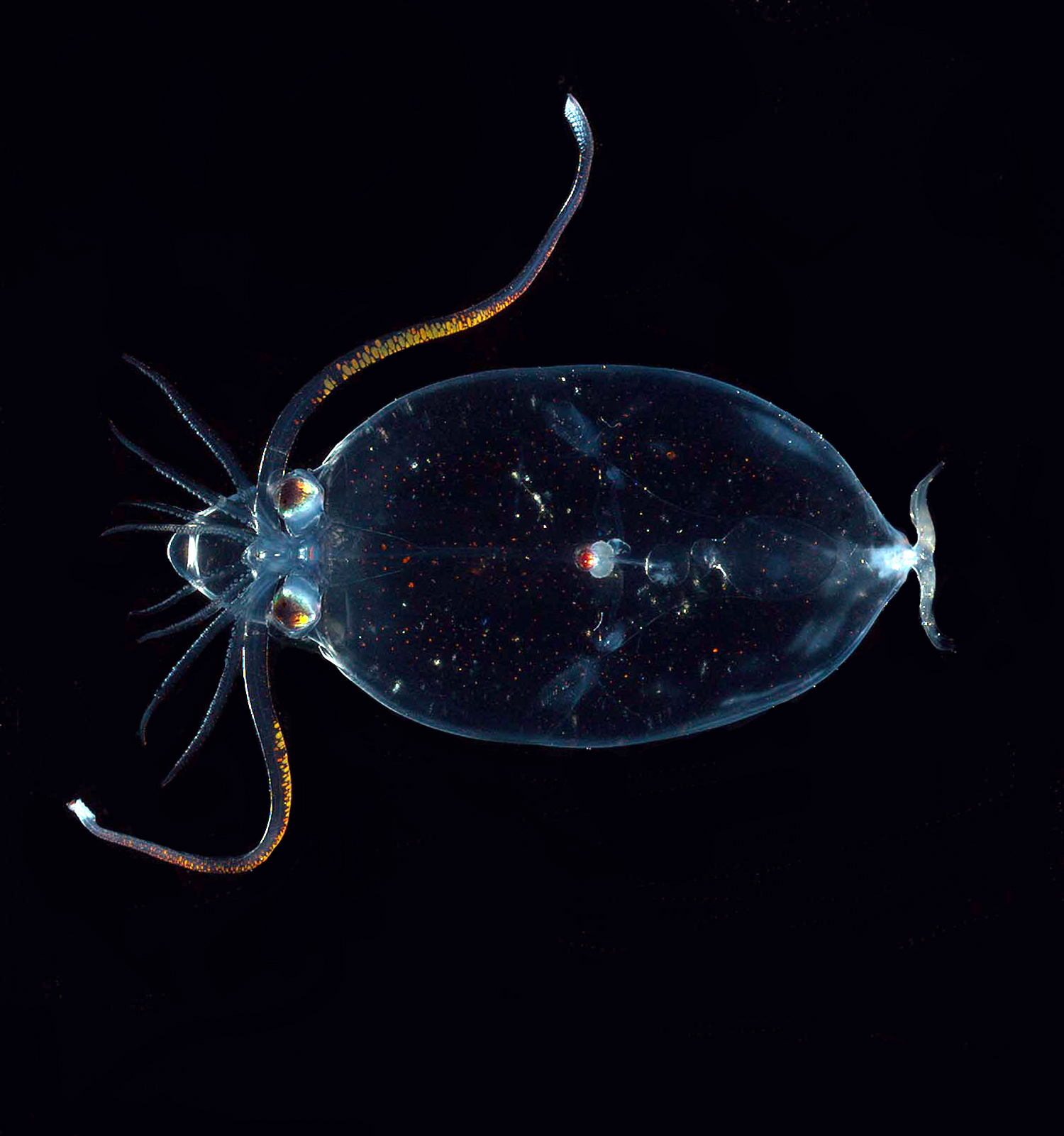 A cranchiid squid seen through a polarising light filter. (NOAA)

“Eyes and guts cannot be made transparent,” explained Woods Hole Oceanographic Institution biologist Sönke Johnsen, in a 2001 review on animal transparency. “Eyes must absorb light to function and guts are betrayed by their contents, since even transparent prey become visible during digestion.”

But the squid have tricks to deal with their opaque bits too. The eyes of at least one of the 60 species making up the glass squid family use a combination of light emitting organs called photophores and reflective cells to deflect this light. Together they create the illusion of sunlight filtering down through the water.

To minimise the impact of their visible digestive organ, it’s positioned vertically as the squid swims horizontally along its length. They also hold their arms up too, as you can see in the video below. This position reduces their silhouette, in case the squid happens to pass over a hungry predator on the lookout for shadows suggesting dinner.

Glass squids can also morph into a sphere as a defence mechanism, by pulling their head and arms into their mantle -  looking highly ridiculous in the process.

The guts of the glass frog (family Centrolenidae) also remain clearly visible through their transparent bellies, but they were not shaped by predators viewing them from below. This species’ partial transparency helps complete its camouflage as it snugly clings with its clear side against lush green leaves of its arboreal forest home.

Its clear belly helps the amphibian change in brightness to match the light levels of its chosen perch. The frog’s limbs are also translucent, blurring the lines between it and its surrounds, for better hiding in plain sight. 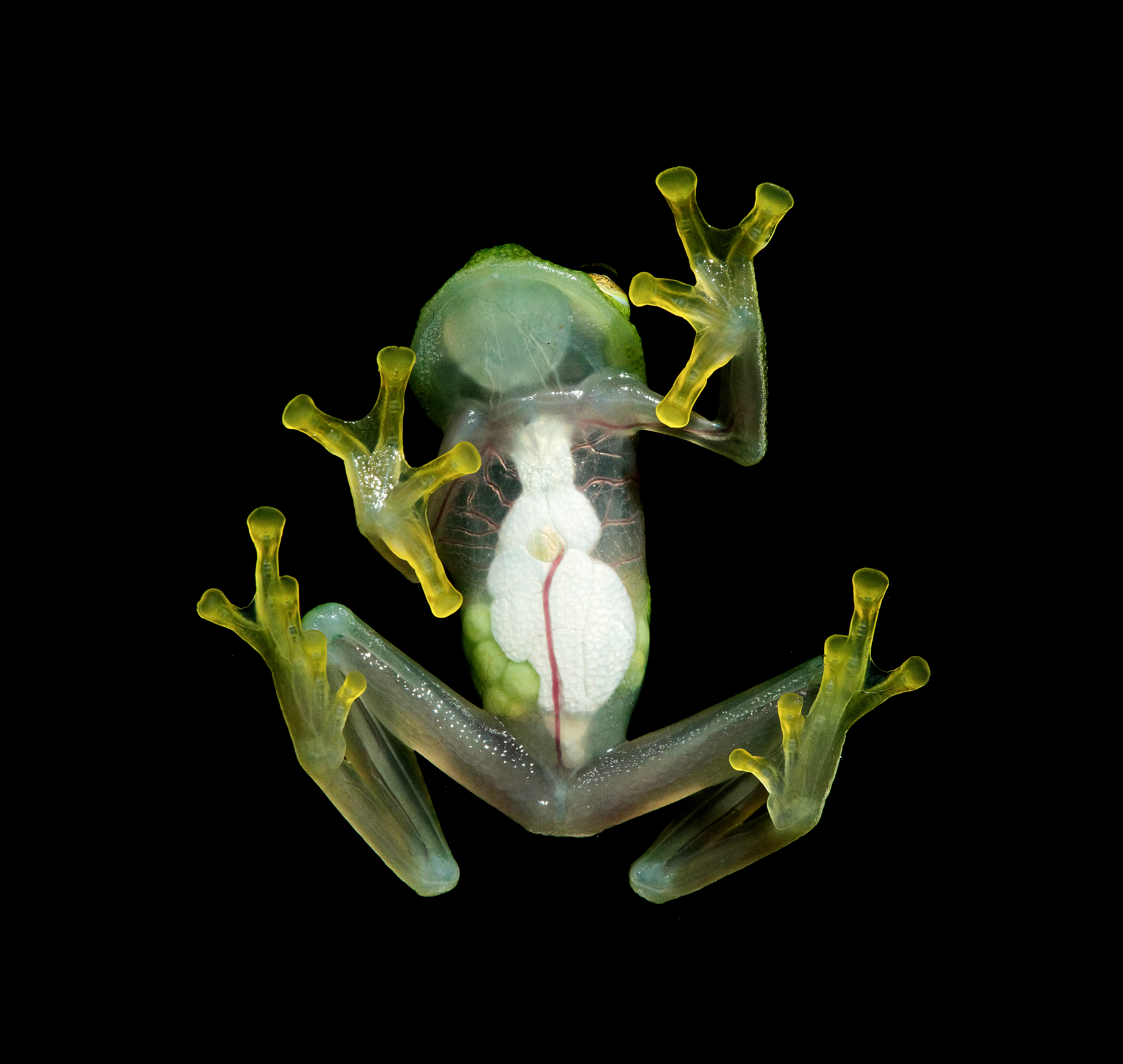 Instead of creating a light-and-mirror illusion, other transparent species have different strategies to hide their visible eye tissues, like crustaceans whose retinas match the colour and brightness of their surrounding environment. The deep sea amphipod, Paraphronima gracilis, has eyes as big as almost 50 percent of its body. Evolution found a way to make most of these giant orbs transparent, aside for the 12 tiny red retinas in each eye.

Those retinas are spaced in just the right way to make them less obvious from below, while maximising their sensitivity to light coming down from above. 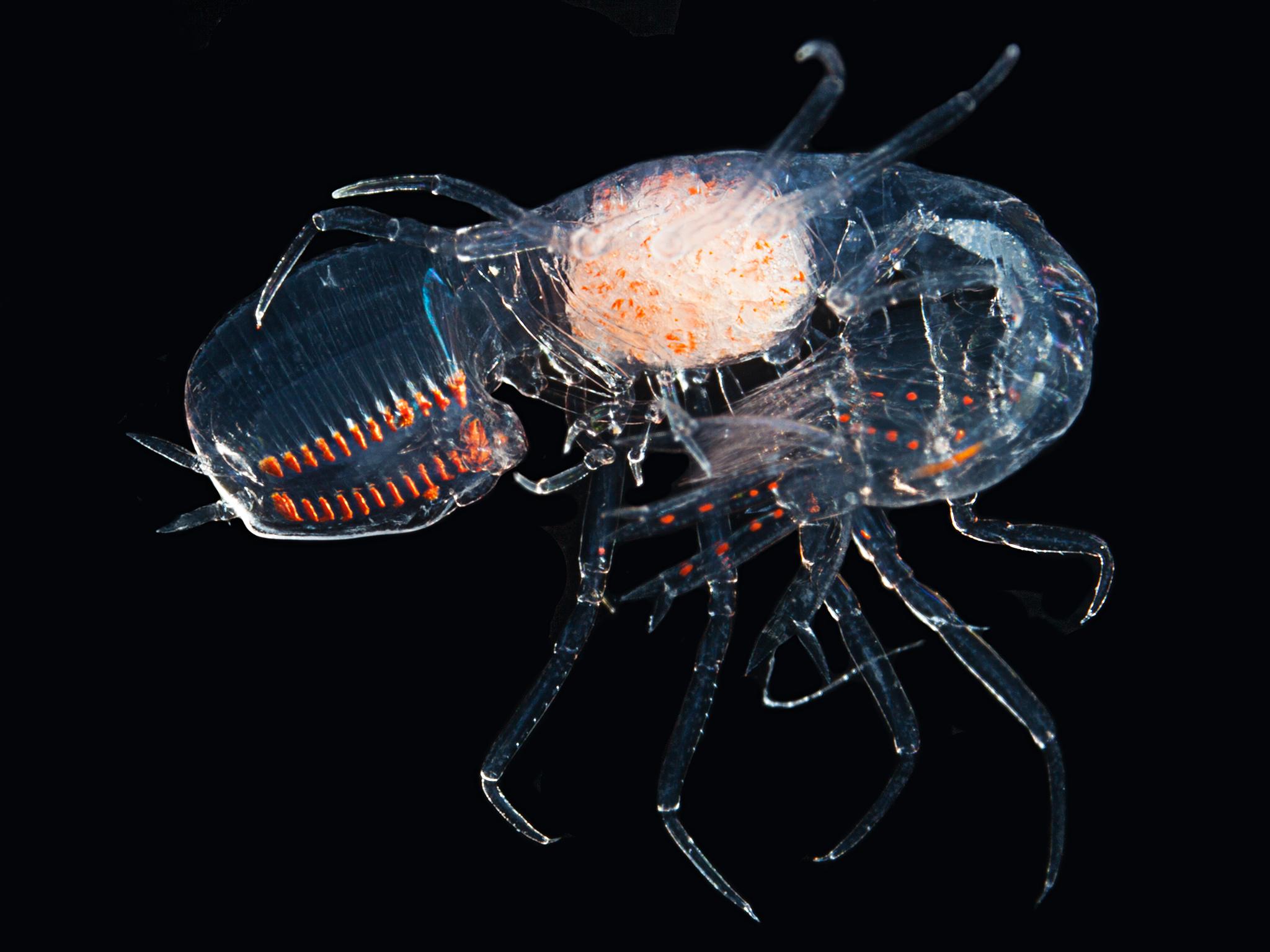 To counter reflections caused by the changes in refractive index between the air and organism, some creatures have evolved tissues with submicroscopic bumps. If the bump widths are less than half the wavelength of the light falling on them, they form an averaged-out smooth gradient between two interfacing refractive indices, disrupting the surface’s ability to reflect light.

The coffee bee moth (Cephonodes hylas), uses this strategy in its strikingly clear cutaneous wings, along with the corneal surface of their eyes. 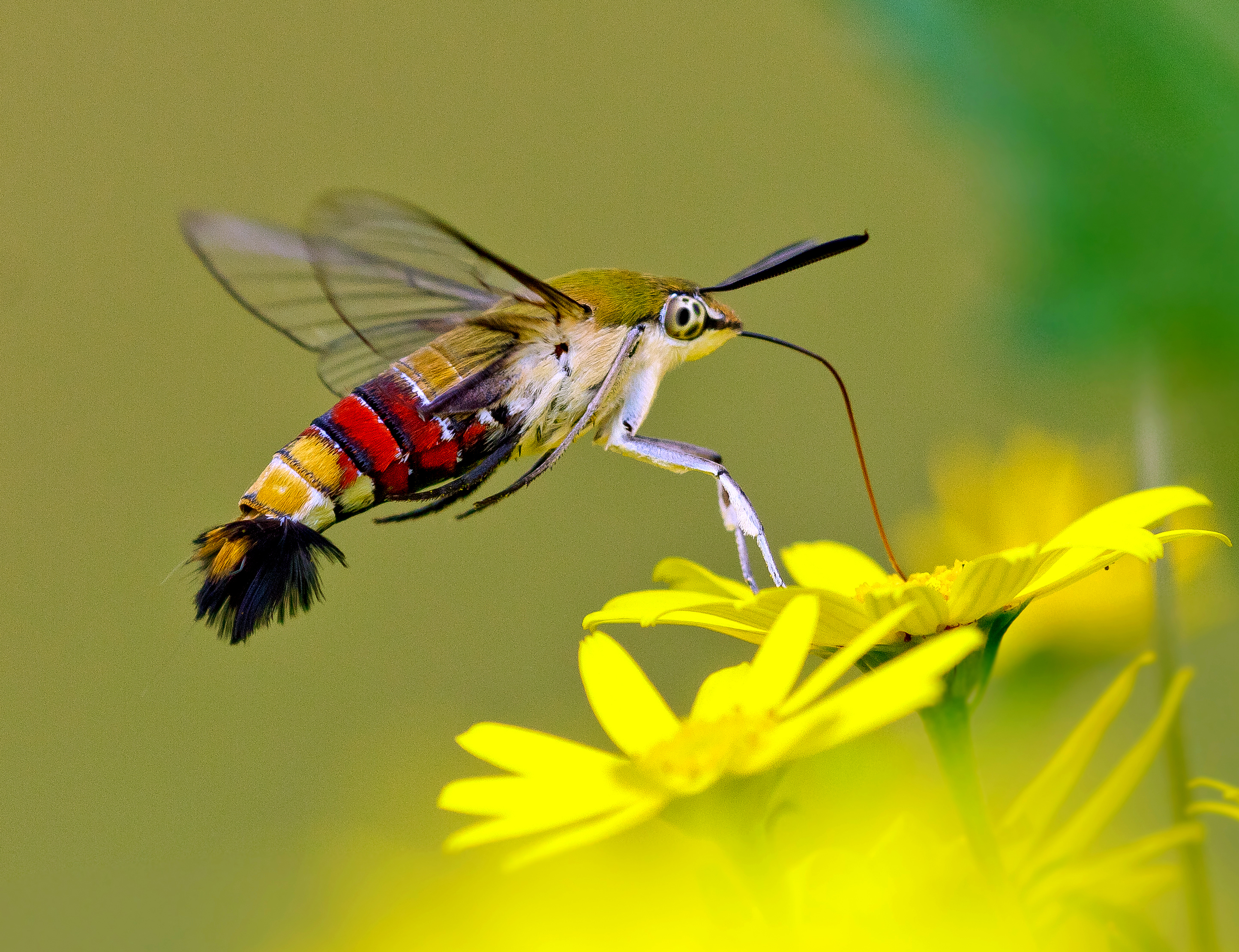 Many baby fish start off as transparent larva riding the ocean currents, and eels are no exception. Before they reach their adult form, freshwater eels pass through a leptocephalus larval phase and then a glass eel stage.

These floating ribbons take the strategy of making themselves flat to the extreme. The thinner an object is, the more light can pass through unperturbed. This also makes them very hard to see edge-on.

When dry, skeleton flowers (Diphylleia grayi) look like a fairly typical white flower. Then the rains descend, and they magically transform into ethereally delicate flower-shaped crystals.

Their white colour isn’t from a pigment, but rather arises when the petal’s rough surface and air gaps work together to reflect light, creating the illusion of whiteness. The refractive index between the clear cellular surface and the pockets of air between their protrusions differs enough to diffuse and reflect a lot of the light that hits them, giving them a white appearance.

But as the rain fills spaces between the cells, replacing the air, the cells’ and gaps’ refractive index becomes more closely matched, letting far more light to pass unaltered and allowing us to see straight through them as well – not unlike a wet, white T-shirt.

Whether this provides D. grayi any evolutionary advantage or not, is a mystery, but they are beautiful to witness. 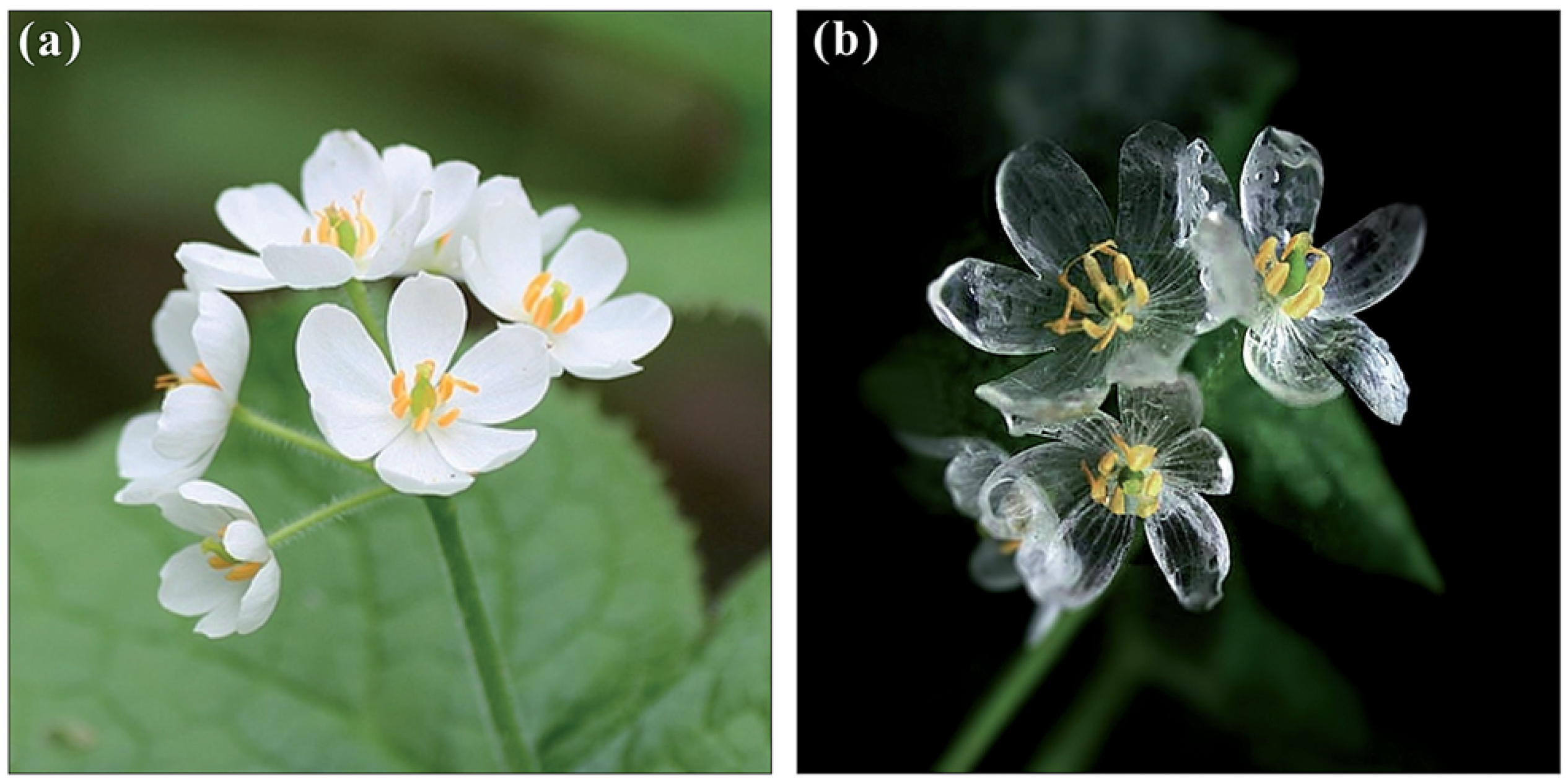 Scientists have taken inspiration from these incredible earthlings and co-opted some of their transparency tricks into our technologies.

Biologists have engineered human cells to have changing opacity using proteins from squid, so we can better see what is going on within them. And engineers are experimenting with the moth wings’ bumpy surface method to create antireflection surfaces for devices.

These wonderfully strange life forms display some of the extreme ways evolution warps light in the game of ‘eat or be eaten’.

Mysterious Medieval City in Africa Had a Genius System to Survive Drought
Intriguing Meteorite From Mars Reveals ‘Huge Organic Diversity’, Scientists Say
The First Stars May Have Been Heavier Than 100,000 Suns
Physicists Used Sound Waves to Give a Tiny Sun Its Own Kind of Gravity
Lightning Strikes Create a Strange Form of Crystal Rarely Seen in Nature