Coastal erosion is a slow force, but a powerful one, over millennia carving new shapes into the edges of land. And it can also reveal secrets hidden for millions of years – such as a new discovery on the coast of England.

It’s a huge cache of 85 dinosaur footprints from the Lower Cretaceous, made by as many as 13 different species  - the largest such discovery ever made in the United Kingdom. The prints are so well preserved that claws, scales, and even skin can be seen in fine detail.

They hail from the era that produced some of the most famous and beloved dinosaurs, around 145 to 100 million years ago, and included in the prints are two of those beasts: Iguanodon, a tall bipedal ornithopod with pointy thumbs; and Ankylosaurus, a spiked herbivore covered with heavy armoured bone plates and with a clubbed tail.

But, ranging in size from 2 to 60 centimetres (0.8 to 23.6 inches), the prints include those from a possible species of stegosaur, as well as several sauropods, and carnivorous theropods. An ankylosaurus print with claw impressions! (University of Cambridge)

They were found in the Ashdown Formation in East Sussex, sandstone cliffs millions of years old, in which many dinosaur footprints have been found. It’s particularly well known for its Iguanodon prints, and in fact the first known Iguanodon fossil (teeth!) was recovered in Sussex in 1822.

But those prints are few and far between. Such a huge collection, discovered due to cliff erosion, is unprecedented.

And it’s a boon to palaentologists – it tells them a bit about how well populated the area was, and which dinosaur species were living side-by-side.

“Whole body fossils of dinosaurs are incredibly rare. Usually you only get small pieces, which don’t tell you a lot about how that dinosaur may have lived,” said palaeontologist Anthony Shillito of the University of Cambridge in the UK.

“A collection of footprints like this helps you fill in some of the gaps and infer things about which dinosaurs were living in the same place at the same time.”

But it’s sheer serendipity that has preserved the footprints all this time. Conditions have to be just right. The ground has to be soft enough to take a good impression of the print. This generally means wet soil, but not so wet that it immediately collapses – this sort of mud is most common around the edges of bodies of water.

As the mud dries and hardens, the footprint is ‘set’, and, over time, covered by layers of sediment that protect it against erosion. When these layers eventually erode, the footprints are once again revealed to the light of day. Sometimes that happens on rock faces that are now vertical due to geological activity, and often these prints are the relief ‘cast’ (as many of these are), as opposed to the indention ‘mold’ made by the foot. 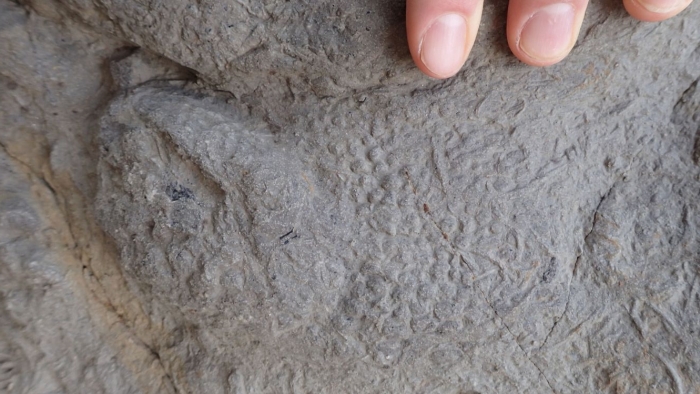 “You can clearly see the texture of the skin and scales, as well as four-toed claw marks, which are extremely rare,” Shillito said.

“You can get some idea about which dinosaurs made them from the shape of the footprints – comparing them with what we know about dinosaur feet from other fossils lets you identify the important similarities. When you also look at footprints from other locations you can start to piece together which species were the key players.”

They also significantly expand on our knowledge of the diversity of dinosaurs in the area during the Lower Cretaceous, based on their preserved tracks. And they shed some light on Shillito’s overarching research – the effect dinosaurs have on waterways, and whether, like hippos, they sometimes create new channels.

“Given the sheer size of many dinosaurs, it’s highly likely that they affected rivers in a similar way, but it’s difficult to find a ‘smoking gun’, since most footprints would have just washed away,” said Shillito.

“However, we do see some smaller-scale evidence of their impact; in some of the deeper footprints you can see thickets of plants that were growing. We also found evidence of footprints along the banks of river channels, so it’s possible that dinosaurs played a role in creating those channels.”

The team’s paper describing the new footprints was published in the journal Palaeogeography, Palaeoclimatology, Palaeoecology.

Physicists Break Record Firing a Laser Down Their University Corridor
An Expert Explains Why The Radioactive Water Stored at Fukushima Should Be Released
Scientists Create Shapeshifting Humanoid Robot That Can Liquefy And Reform
Dogs Can Be Aggressive For Lots of Reasons, And One of Them Is You
Earth’s Inner Core May Right Now Be in The Process of Changing Direction