Researchers last week captured and killed the largest Burmese python to be removed from Big Cypress National Preserve in the Florida Everglades, according to wildlife officials.

The 17-foot (5.1-meter), 140-pound (63.5-kilogram) female snake – an invasive species devastating to native wildlife – was discovered using a new tracking approach that leans on technology and the laws of attraction.

Burmese pythons caught in Florida are often 6 to 10 feet (1.8 to 3 meters) long, according to the Florida Fish and Wildlife Conservation Commission. 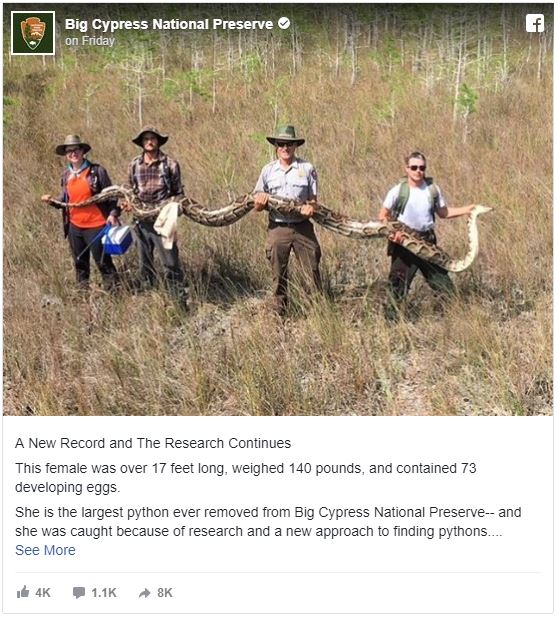 In their native lands, the snakes commonly reach 18 feet and can exceed 20 feet.

The breeding season for Burmese pythons is between January and April.

FWC officials said that using radio transmitters was part of a larger, collaborative effort to eradicate the nonnative species from South Florida.

“The team not only removes the invasive snakes, but collects data for research, develop new removal tools, and learn how the pythons are using the Preserve,” FWC officials wrote in a statement on Facebook announcing the catch.

Florida has used other methods to manage the python population, including encouraging the humane killing of pythons on private property and at 22 wildlife management areas, including Big Cypress.

The state has also sponsored removal programs with prize incentives, such as the Python Pickup Program and regular public hunts.

The state also encourages the public to share the locations of python sightings to help better track the snakes’ whereabouts.

The Burmese python is native to Asia and came to inhabit the swampy lands of South Florida after people released pet pythons into the wild, reported CBS News.

Burmese pythons were first spotted in the Everglades in the 1980s, and the population grew in the aftermath of Hurricane Andrew in 1992.

Since then, the python has disrupted the natural ecosystem of predator and prey in the Everglades, competing with native wildlife for food and contributing to the decline in several mammal species.

“Marsh rabbits, cottontail rabbits, and foxes effectively disappeared,” according to the US Geological Survey.

Hubble’s Closeup of The Orion Nebula Looks Like a Surreal Dreamscape
Hidden ‘Hunger Stones’ Reveal Drought Warnings From The Past
Hundreds of Shimmering Crystal Fragments Discovered at Prehistoric Burial Site
A Strong Solar Storm Could Be Heading Our Way. Here’s What We Know
For The First Time, Scientists Have Named a Heat Wave. Here’s Why It’s a Big Deal