About 3,500 feet under the South Pacific sits a piece of land 2 million square miles in size – about half as big as Australia.

But scientists can’t agree on whether this submerged landmass, called Zealandia, is a continent or not. A team of geologists declared it one in 2017, but not all researchers are convinced.

“It’s not like a mountain, country, or planet. There is no formal body to approve a continent,”  Nick Mortimer, a geologist from New Zealand’s GNS Science who led the 2017 group, told Insider.

While the definition of a continent is contentious, Mortimer’s group suggested that a continent should have clearly defined boundaries, occupy an area greater than 386,000 square miles (1 million square kilometers), be elevated above the surrounding ocean crust, and have a continental crust thicker than that oceanic crust.

Zealandia meets all those stipulations.

“If you were to drain the oceans, Zealandia would stand out as a well-defined, high-standing plateau above the ocean floor,” Mortimer said.

He considers it “the thinnest, most submerged, and smallest continent.” 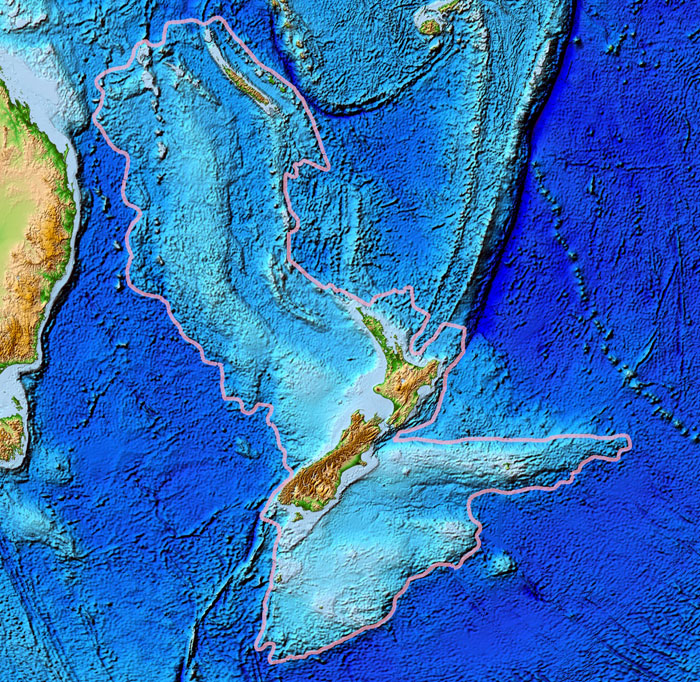 Above: A topographical map of the Zealandia continent.

The problem, however, was that until recently, the oldest crust and rock ever sampled from Zealandia was just 500 million years old, whereas all the other continents contain crust that is 1 billion years old or more.

But a recent study found that part of the submerged continent is twice as old as geologists previously thought, which could boost Mortimer’s argument.

“This new study ticks that final continental box,” Rose Turnbull, a New Zealand geologist who co-authored the study, said in a press release. “There is no longer any doubt that we live on top of a continent.”

How to date a continent

Zealandia, a term geophysicist Bruce Luyendyk coined in 1995, is made up of New Zealand and a collection of submerged chunks of crust that broke off an ancient supercontinent called Gondwana about 85 million years ago.

About 94 percent of it is underwater – Zealandia sunk under the waves about 30 million to 50 million years after it broke off Gondwana. So it’s a challenging landmass to study.

The geologists behind the recent research looked at 169 chunks of Zealandia granite, which were found under New Zealand’s South and Stewart Islands. Granite forms when magma crystallizes deep within the Earth’s crust.

By extracting microscopic crystals from the granite, the team was able to determine both the age of the crystals themselves and of the crust in which they formed.

The results showed that crust was once part of another supercontinent known as Rodinia, which formed between 1.3 billion and 900 million years ago.

In other words, Zealandia’s geologic history starts far earlier than 500 million years ago.

Part of Turnbull’s mission is to create a 4D map of Zealandia’s western coast – to visualize what that boundary looks like in three dimensions and how it has changed over time.

The map, part of a global initiative to survey the planet’s entire ocean floor by 2030, also revealed Zealandia’s size and coastlines in unprecedented detail.

In addition, Mortimer’s team created a tectonic map showing the locations of the continental and oceanic crusts that make up the submerged landmass.

These new, detailed maps, paired with the discovery that parts of Zealandia are older than geologists realized, offer further evidence that it should be considered the eighth continent, according to Mortimer.

“We hope that Zealandia will eventually make its way onto general world maps, be taught in schools, and become as familiar a name as Antarctica,” he said.

Physicists Used Sound Waves to Give a Tiny Sun Its Own Kind of Gravity
Astronomers Just Discovered a ‘Bear’ on Mars
There’s a ‘Lost City’ Deep in The Ocean, And It’s Unlike Anything We’ve Ever Seen
Tiny Radioactive Object Goes Missing in Australia, Sparks Urgent Search
Archaeologists Find Hidden Ruins of ‘Complete’ Roman-Era City in Egypt