Amazon welcomed visitors into its headquarters over the weekend to see a rare corpse flower named Morticia in bloom.

The 6-foot-tall (182-centimetre-tall) plant, which is technically called a “titan arum”, sits in the rainforest inside of the Spheres on Amazon’s Seattle campus.

The Spheres opened earlier this year, and they’re intended to serve as a relaxing place for employees.

But Amazon let visitors into the dome-shaped buildings over the weekend to witness an event that only happens once every seven years (at least) for the corpse flower.

The corpse flower’s name comes from the plant’s dank smell, reminiscent of rotting flesh. But that didn’t stop thousands of visitors who lined up to get a closer look of the plant’s bloom, which lasts only two days.

Watch the plant over time reach its full bloom inside Amazon’s rainforest:

There’s something stinky in The Spheres. An Amorphophallus titanum, better known as a corpse flower, took up residence last month and is blooming this weekend. It’s a rare event. The corpse flower usually takes about seven years to produce its first bloom, which only remains open for about 48 hours, with the bloom beginning last night. While blooming the corpse flower, native to Sumatra, Indonesia, possesses an odor of rotting flesh, which gives the plant its popular nickname. “One of our goals with The Spheres is to encourage anyone passing through, visiting, or working to learn something new – to sit and learn something about the plants inside as they all have a unique story to tell, including Morticia, our first corpse flower,” said Spheres program manager, Justin Schroeder. “This is super exciting for our horticulture team and we are really excited to share it with Amazonians and our local community.” #thespheres #seattle #corpseflower

The plant is housed inside the Amazon Spheres, a series of glass domes that are part of the the company’s Seattle headquarters.

The glass dome-shaped Spheres were designed as a relaxing communal place for Amazon employees to work and collaborate.

The Spheres officially opened earlier this year right next to Amazon’s existing headquarters, whose construction cost a cool US$4 billion.

Besides the indoor rainforest where the corpse flower is located, the area also features lawn games and a dog park.

Morticia the plant stood only 19 inches (48 centimetres) tall when she first came to the Spheres in September, Amazon says.

The corpse flower is one of the over 400 species of plants from around the world that Amazon collected to include in the Spheres. Amazon has its own team of horticulturalists that work to maintain the conservation of the plants.

Until the plant bloomed this weekend, it wasn’t giving off the rotting flesh smell it’s known for – that’s only emitted when the corpse flower blooms completely.

Amazon set up a live stream on Twitch for people to watch the flower bloom, which is about as exciting as watching grass grow.

But by Friday night, the corpse flower reached its full bloom. 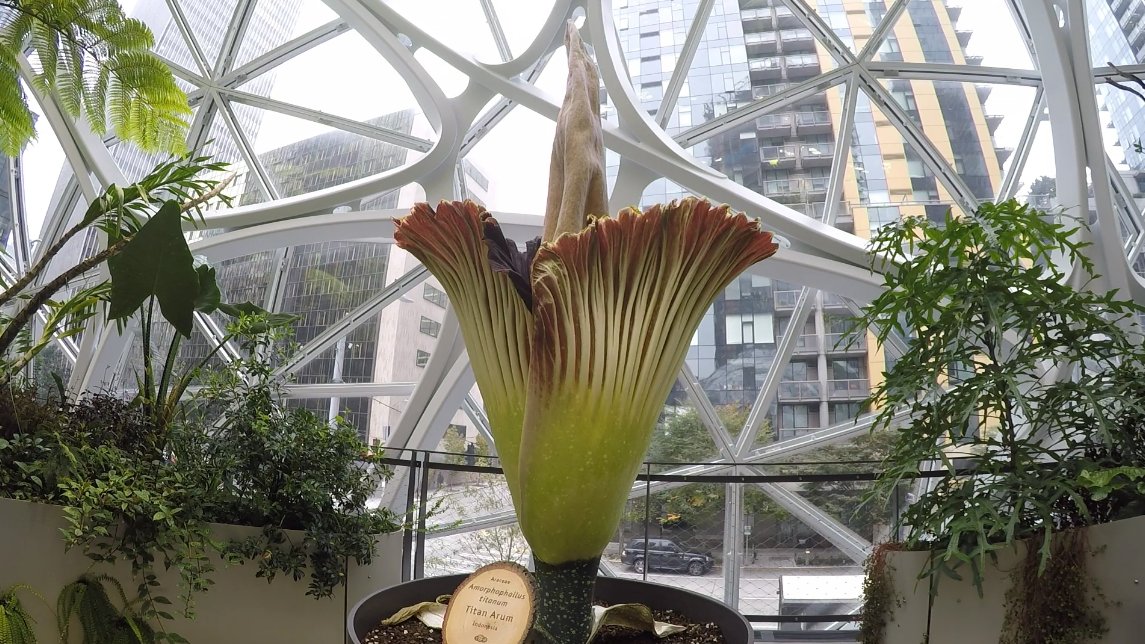 When the flower is in full bloom is also when it gives off the worst of its rotting smell, which is actually used to attract insects for pollination.

Although Amazon’s plant was only 6 feet tall, corpse flowers can reach heights over 9 feet (2.7 metres) tall.

The corpse flower only blooms for 48 days, so the plant had already started to close up Sunday night. See you all in seven years for Morticia’s next bloom!

Mysterious ‘Zone of Uncertainty’ Inside The Brain Reveals a Surprise
Earth’s Inner Core May Right Now Be in The Process of Changing Direction
The True Extent of Global Warming Has Been Hidden, Scientists Warn
New NASA Nuclear Rocket Plan Aims to Get to Mars in Just 45 Days
These 5 Traces of Ancient Ancestors Still Exist in Human Bodies Today