This February, mother nature is keeping us occupied with a puzzling new riddle, and the solution has even got the scientists stumped: how exactly did a humpback whale end up dead on the edge of the Amazon rainforest in Brazil?

It’s a curiosity that has drawn worldwide attention. The 8-metre-long carcass (26 feet) was found near the mouth of the Amazon river last Friday under a circle of vultures. Afterwards, several videos of the unfortunate animal were posted online. 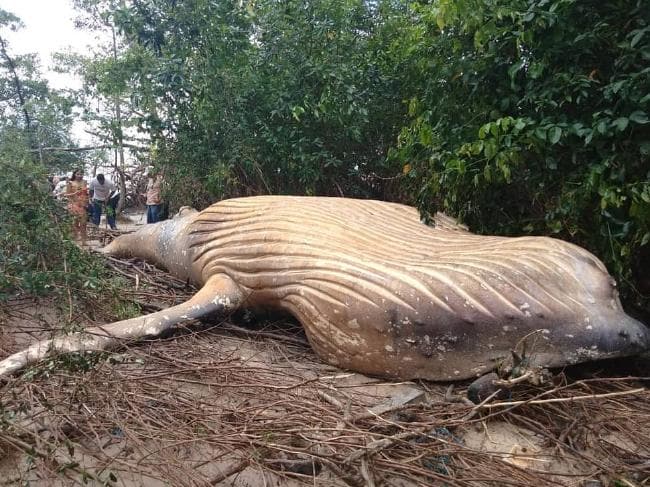 The footage piqued the interest of a wildlife nonprofit, called the Bicho D’água Institute, which sent ten biologists to the scene to figure out what was going on.

Like a fish out of water, the biologists found the mammal’s massive carcass resting on the forest floor of Marajo island, roughly 15 metres (50 feet) from the ocean shore and close to the Amazon river mouth.

With no wounds seen anywhere on its body, there were few clues to explain how this creature ended up so far from the water, not to mention its natural summer habitat.

“We’re still not sure how it landed here, but we’re guessing that the creature was floating close to the shore and the tide, which has been pretty considerable over the past few days, picked it up and threw it inland, into the mangrove,” Renata Emin, a marine specialist told the Brazilian news site O Liberal, according to Newsweek.

“Along with this astonishing feat, we are baffled as to what a humpback whale is doing on the north coast of Brazil during February because this is a very unusual occurrence.” 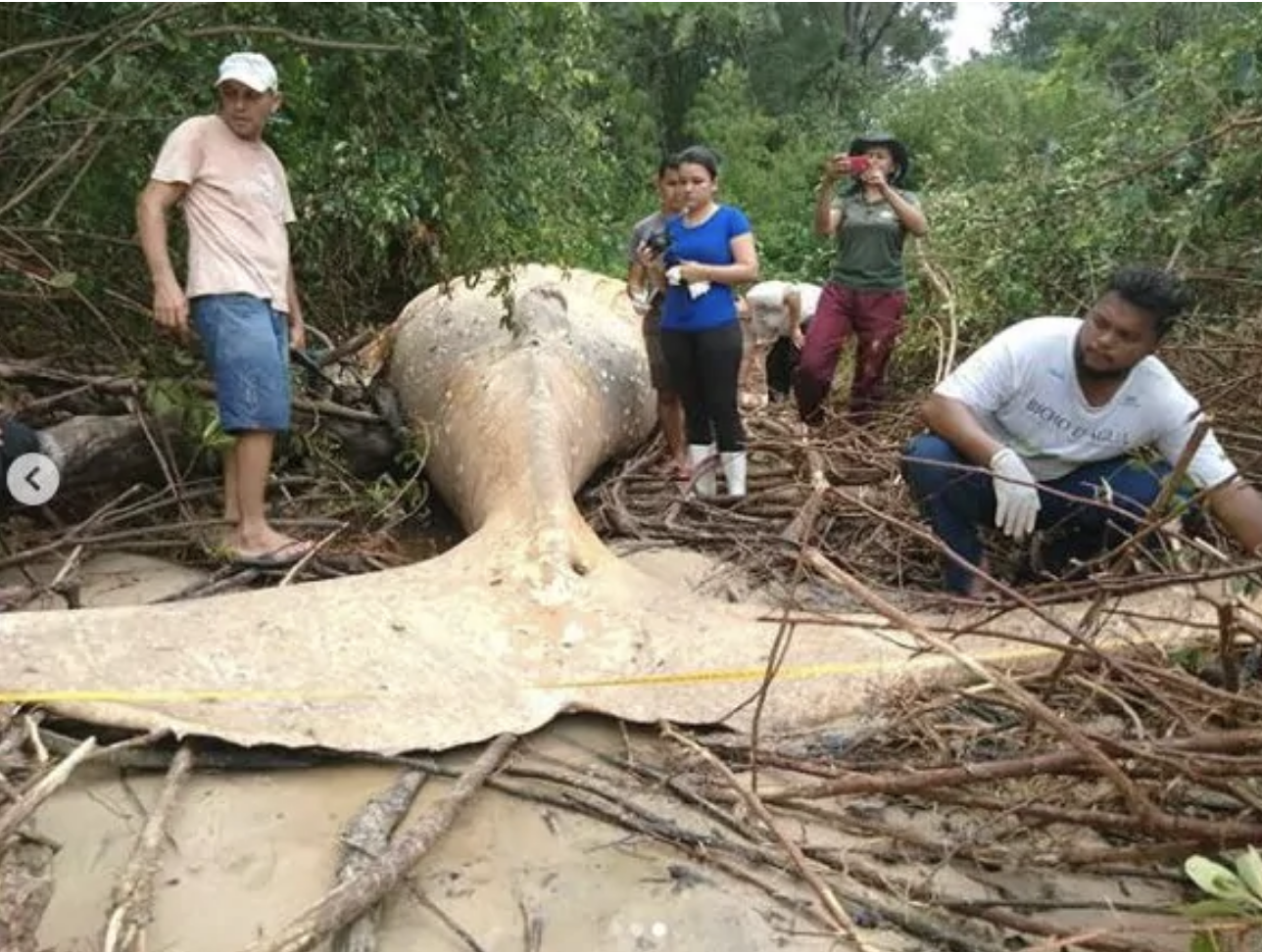 Humpback whales (Megaptera novaeangliae) normally frequent the Amazon Basin in wintertime, when salt water crawls up the freshwater rivers, and that’s precisely what makes this discovery so baffling.

Not only was the whale found remarkably far from shore, it was also found in the exact opposite season you’d expect to see humpbacks in this region.

During the Amazonian summer, when freshwater rivers flood, local humpback whales should have already travelled over six thousand kilometres south (4,000 miles), to their feeding grounds in Antarctica’s krill-filled summer oceans.

So why is this one here? And how did it end up landlocked? 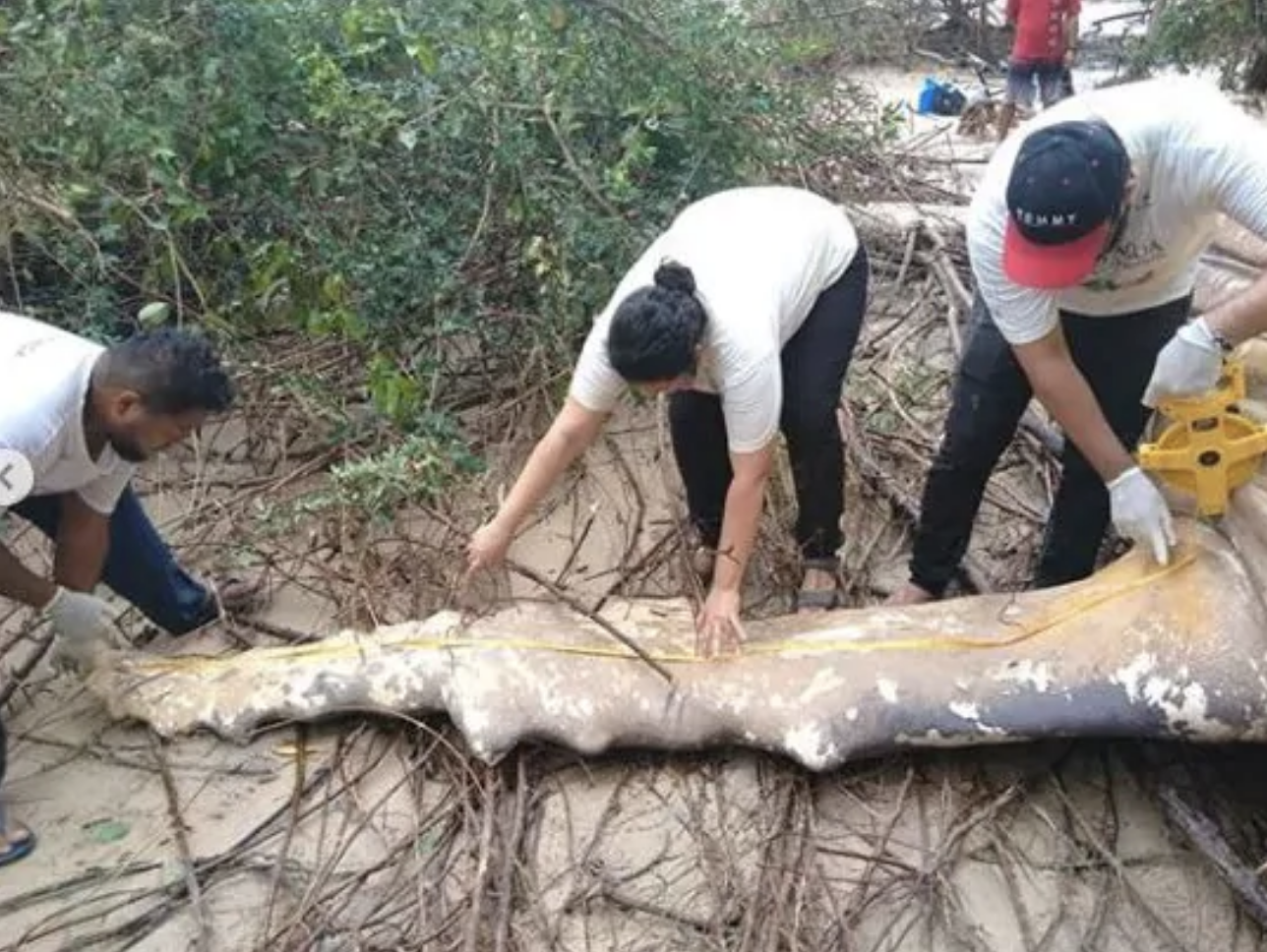 There is one clue that may help explain things. Judging by the size of the carcass, the biologists think the whale is probably a calf, no more than a year old and half the size of an adult.

This could potentially explain why this infant is so far away from its summer habitat. The biologists suspect that the juvenile whale somehow lost its mother during migration, and that’s why it was left behind in the Amazon Basin.

All by itself with little life experience, scientists think the baby whale was probably dumped by high waves onto the shore, ultimately becoming entangled in the mangroves, unable to escape.

Another theory is that the calf died from ingesting plastic waste and its dead body was washed ashore by stormy seas.

There’s only one way to tell for sure. An autopsy is being carried out on the whale right now, and its cause of death will be determined in the coming ten days.

An Incredible Thing Happens When Dolphins And Humans Team Up
Astronomers Studied More Than 5,000 Black Holes to Figure Out Why They Twinkle
‘Polluted Realism’: How Monet’s Art Mirrors The Evolution of Smog
Ancient Goo Spills The Secrets of How The Egyptians Mummified Their Dead
A Hidden Food Web Exists in The Desert, And It Thrives on Death