Humans have been mining diamonds for a long time, but a new stone hauled from the belly of the Earth could very well be a first. The diamond itself is hollow – and inside is another diamond, freely moving around.

It was discovered in a Russian mine in Siberia, and has been named the Matryoshka Diamond, after the Russian nesting matryoshka dolls.

Inclusions and flaws in diamonds are extremely common; in fact, most diamonds have some sort of flaw, or piece of mineral trapped inside. It’s not a bad thing – in fact, we’ve gained access to some pretty rare stuff from deep underground because it’s been trapped in diamonds as they form.

But a diamond in a diamond? That, according to Russian diamond mining group ALROSA, is a new one.

Sharp eyes detected something unusual about the stone during the sorting process, and it was sent to ALROSA’s Research and Development Geological Enterprise for assessment. There, scientists subjected the diamond to Raman and infrared spectroscopies, and X-ray microtomography.

“The most interesting thing for us was to find out how the air space between the inner and outer diamonds was formed,” said Oleg Kovalchuk of ALROSA’s Research and Development Geological Enterprise. The researchers have a couple ideas which involve processes that may have occurred in Earth’s mantle.

According to one of their hypotheses, “a layer of porous polycrystalline diamond substance was formed inside the diamond because of ultra-fast growth, and more aggressive mantle processes subsequently dissolved it. Due to the presence of the dissolved layer, one diamond began to move freely inside another, just like a matryoshka nesting doll.” 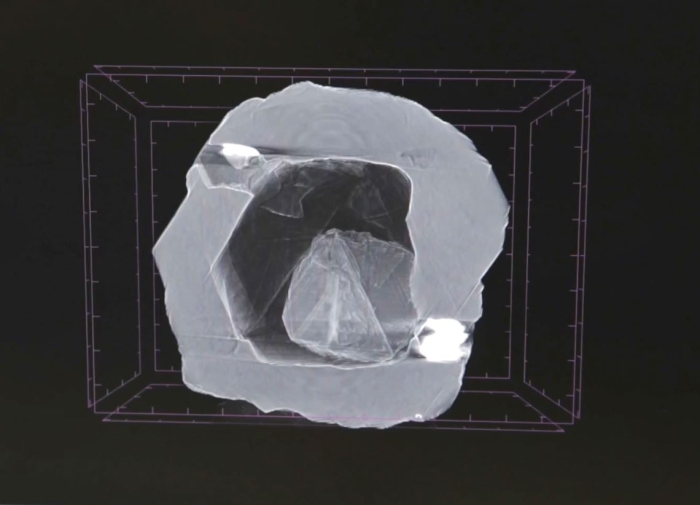 They also estimate that the diamond may be over 800 million years old, although that is yet to be verified. According to a Bloomberg report, the diamond is going to be sent to the Gemological Institute of America for further analysis.

Because it’s such a rare find, the company has yet to estimate its worth.

“As far as we know, there has been no such diamond in the history of global diamond mining,” Kovalchuk said.

“This is really a unique creation of nature, especially since nature abhors a vacuum. Usually, in a case like this, the minerals would be replaced by others without forming a cavity.”

Strange Magnetic Anomalies on The Moon Can Finally Be Explained
The Yellowstone Supervolcano Holds Way More Liquid Magma Than We Realized
This May Be The Oldest Fragment of Modern Humans in Europe, Or Something Even Rarer
‘Dynamic Soaring’ Trick Could Speed Spacecraft Across Interstellar Space
We May Finally Know How Lightning Gets Its Zigzag Shape