In the far North of the globe, hidden under continental sheet ice nearly a kilometre thick, geologists have found evidence that, not so long ago, Greenland was rocked by a collision with a massive meteorite.

The proof? A huge impact crater, 31 kilometres (19.3 miles) in diameter. It is the 25th largest impact crater ever found, and the largest of its age, which is less than 3 million years. It’s also the first impact crater to be found underneath one of the planet’s current ice sheets.

The meteorite that created it was a beast of iron, at least one kilometre (0.62 miles) wide. 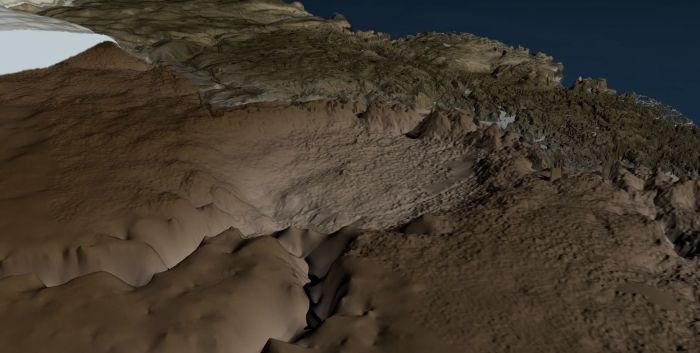 It was originally spotted in July 2015, and a large international team of geologists has spent the better part of three years working to verify the discovery.

You might be wondering how one can just “spot” a crater buried under ice. The answer is over a decade’s worth of radar-sounding data, collected by researchers between 1997 and 2014 for NASA’s Program for Arctic Regional Climate Assessment and Operation IceBridge.

This technique uses radar to peer through the ice (similar to ground-penetrating radar) and build a map of the topography of the ground beneath an ice sheet or glacier. This helps glaciologists measure the thickness of the ice, which in turn is useful in estimating ice melt due to global warming. 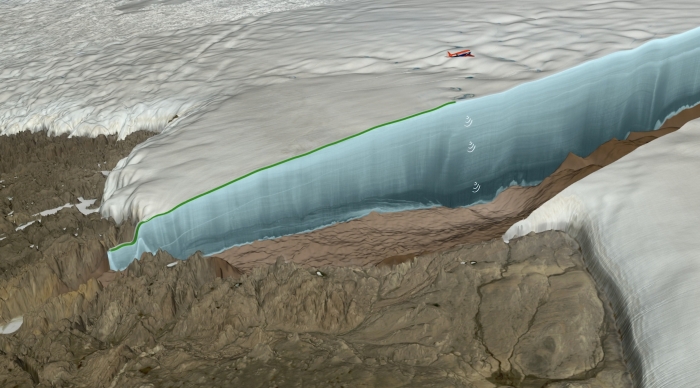 As they were looking at these datasets, the geologists noticed something really unusual: a large circular depression underneath Hiawatha Glacier.

“We immediately knew this was something special but at the same time it became clear that it would be difficult to confirm the origin of the depression,” Kjær said.

So a research team flew out in May 2016 to make a more detailed survey of the area, taking photos and using a new state-of-the-art radar developed at the University of Kansas. They flew in a grid pattern over the glacier, taking multiple observations.

“You can see the rounded structure at the edge of the ice sheet, especially when flying high enough,” said electrical engineer John Paden of the University of Kansas.

“For the most part the crater isn’t visible out the airplane window. It’s funny that until now nobody thought, ‘Hey, what’s that semicircular feature there?’ From the airplane it is subtle and hard to see unless you already know it’s there.

“Using satellite imagery taken at a low sun angle that accentuates hills and valleys in the ice sheet’s terrain – you can really see the circle of the whole crater in these images.” 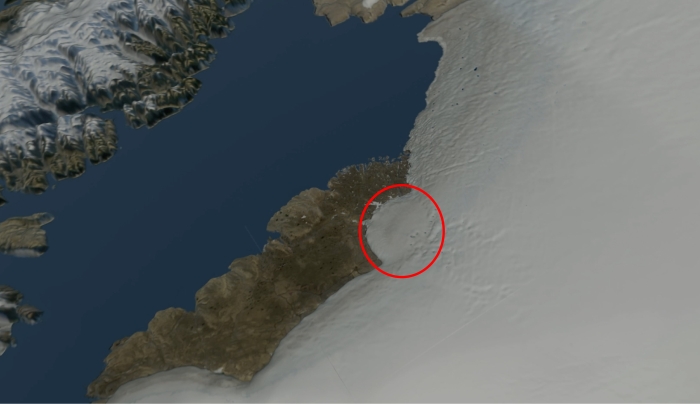 The radar, though, captured the crater in stunning detail, including the outer rim, a central peak uplift as expected for a large complex crater, basal debris, and disturbed and undisturbed ice.

Ground-based and geochemical analysis of the sediments near the glacier that had been washed out from the crater also showed evidence of impact processes, indicating the presence of iron.

These included shocked quartz, which is commonly found at impact sites, and glass, which is created from silica in the bedrock by the intense heat of the impact.

The age of the crater is difficult to estimate precisely. There’s solid evidence that it happened before Greenland was covered in ice, which is around 3 million years at the oldest, but it could have occurred as recently as 12,000 years ago, around the end of the last ice age.

This means it’s somewhat difficult to know how the impact affected the planet, but we can make a few guesses. For instance, “it happened when Greenland was ice-covered and thus would have melted a significant amount of meltwater. This meltwater would be routed southwards towards a sensitive spot in the climate system,” Kjær told ScienceAlert.

The next step will be recovering nearby debris that could have been a result of the impact, as well as figuring out how to get under the ice to the crater itself to recover material from the structure that melted during the impact.

It’s not going to be an easy task, but the scientists are excited to get to work.

“How often do you as a scientist have the chance to make such a significant discovery and open up a new research field and lead the team to do so,” Kjær said.

Bar Graphs Induce a Hidden Bias in Interpretation, Experiment Shows
Wildfire Destruction in The Western US Has Doubled in Just 10 Years
Mysterious Medieval City in Africa Had a Genius System to Survive Drought
A Billion-Dollar Biotech Company Plans to Bring The Dodo Back to Life
AI System Detects Strange Signals of Unknown Origin in Radio Data